The twelve species of Bittern in the subfamily Botaurinae complete the family Ardeidae.

Bitterns are less well known than Herons and Egrets because they are secretive birds living mainly in reed beds where they feed on eels, fish and insects.

They have shorter necks and legs than the rest of the Herons and are cryptically coloured. Their colouration, combined with their habit of sitting upright with their heads back and their bills pointed skyward, can make them very difficult to spot.

A number of the smaller species can climb up reeds and fly readily, but the larger species prefer to walk. Bitterns like Herons have powder down patches which they can use to help clean their plumage.

Ixobrychus contains 8 smaller species known as Little Bitterns about which much less is known.

The Eurasian Bittern is a partial migrant in Britain where it has suffered considerable decline in numbers in the last 200 years – due to extensive habitat destruction. It is believed to be polygynous, with males having more than one mate.

Males defend territories with their loud booming calls, which can be heard by humans up to 5 miles away.

Unlike other herons, they nest solitarily – with one or more females choosing to mate with a territory-holding male for the right to live in his territory.

The American Bittern, B. lentigrosus, is not quite as restricted to reed beds as is the Eurasian species and can be observed in less concealing wetland habitats. It is migratory visiting as far north as Canada during the summer.

The European Bittern builds its nest about water level on matted roots in reed beds. The nest is built, the eggs incubated and the young raised entirely by the female. She lays 3-6 olive brown eggs.

Little Bitterns, the only other Bittern in Europe, is not limited to reed beds in its distribution, though it likes thick vegetation to skulk in. It will nest anywhere from just above water level to 3m (10 ft) up in a water’s edge tree.

The Little Bittern is strongly nocturnal in contrast to its American cousin the Least Bittern which is distinctly diurnal.

Checklist of Bitterns of the World

Balaeniceps rex, the Shoebill, or Shoebill Stork or Whale-headed Stork is a bird of relatively large size, is predominantly grey and has a height of 48-54 inches or 110-140 cms tall, found only in Central Africa.

Its main identifying feature is its large swollen bill. 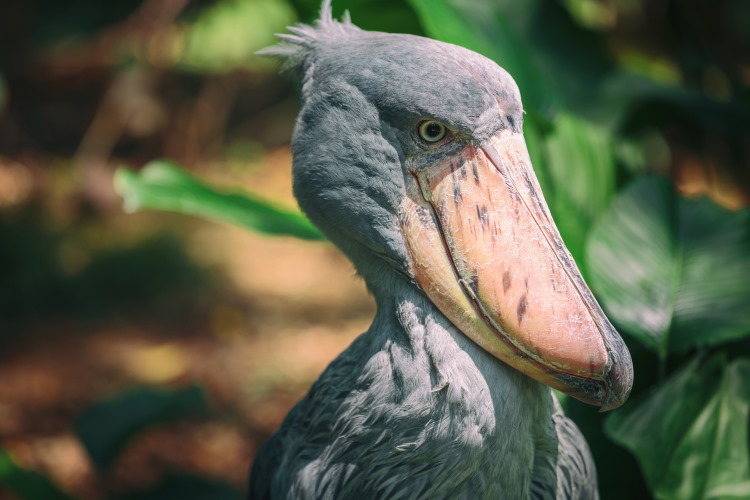 Shoebill Storks use their large bills to catch often quite large specimens of its prey, normally fish, and particularly lungfish.

Shoebills will however also eat reptiles and amphibians, as well small mammals and birds. Primarily it is a bird of dense, mixed vegetation swamps. It tends to move slowly, not hopping or running. It forages singly or in pairs.

Unlike many other members of this order it is primarily a visual hunter. With a rather flamboyant habit of throwing its whole body bill first at its intended prey.

It is most often observed standing still as a statue, with its bill resting on its breast, as it watches the waters surface for rising prey. It has a particular liking for waters with a low oxygen content, where the fish are forced to come to the surface to breath. 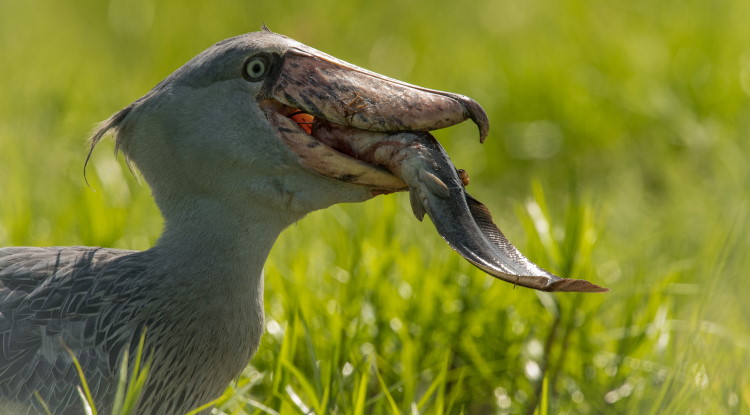 Shoebill Storks are monogamous and nest solitarily, normally with the nests well spaced out, less than 3 pairs per km2.

In most places Shoebills appear to defend territories, their nests are usually found in the centre of the territory. The nest is built on a large mound of floating vegetation. This mound may be 3 metres across and the nest itself is 1 to 1.7 metres across.

Both sexes participate in building the nest. Normally two eggs are laid and both partners are involved in the incubation of the eggs, which lasts about 30 days. Normally the female does all the night shift and half the day shift, meaning she does 3 quarters of the incubation.

The eggs and the small chicks may be doused with water on hot days.

The young of the Shoebilled Stork are always attended by one adult or the other who protects them and shades them from the sun.

They feed on regurgitated food from the adults bill, until they are about 30 days old when they can start accepting whole fish. The young are fully fledged and can leave the nest by walking on about the 95th day of their lives – however it is about another 10 days before they can fly. They may be fed by the adults for up to a month after this time. 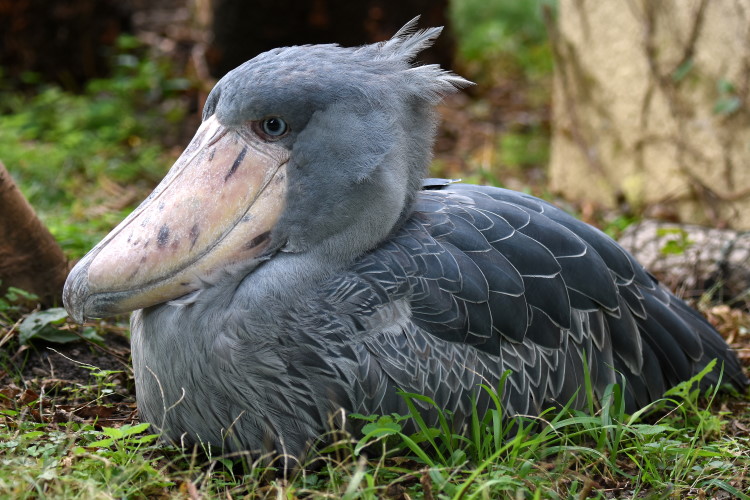 The Shoebill Stork is listed as a species of ‘Special Concern’ by ICBP and is listed in Appendix II of the Cites Convention.

Because of the inhospitable nature of its preferred habitat estimates of its total population vary greatly and range from about 5,000 to 15,000 birds in total.

The Hammerhead, Scopus umbretta, otherwise known as the Hamerkop, Anvil-head or Hammer-headed Stork is a medium sized (20 inches or 50cms long) brown bird.

It has a strong crest of feathers pointing backwards from the back of its head, in counterpoint to its stoutish bill. It is this which gives it its popular names.

In comparison with other Storks it has a shorter neck and legs, giving it a more dumpy image. 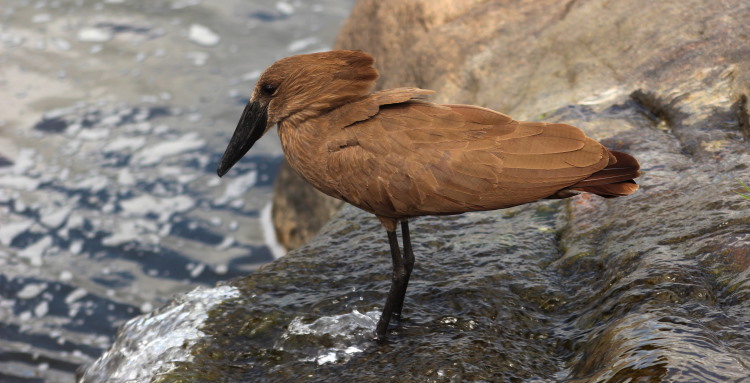 The Hamerkop is non-migratory, monogamous and territorial. Normally it is only seen singly or in pairs. It is found mainly in Western Africa from SW Arabia to Madagascar.

Hamerkops feed primarily in shallow water where they take a variety of foodstuffs including fish, amphibians, insects and crustaceans. They can often be observed feeding from the Hippopotamuses.

They feed mostly in the early morning and at dusk.

PinThey are renowned for the huge nests they build, which many African peoples regard as bad luck to disturb.

These birds build a huge dome of over 8,000 sticks which can be 2m high and nearly 2m wide. It may take an individual pair of Hamerkops up to 6 months to build this huge edifice. This nest is easily strong enough to withstand a man walking across the top of it.

They have a long entrance tunnel and are the avian equivalent of a fortress. They are normally built in thick woodland not too far from water.

Breeding occurs in all months of the year. Three to 7 white eggs are laid deep inside this structure. Both sexes assist in incubating the eggs and feeding the young.

Well, I hope you’ve learned a little about the wonderful world of bitterns, the shoebill stork and the hamerkop!