Hornbills are very distinctive birds, often seen in aviaries and zoos as well as on television nature programmes.

Besides all this though, it is their oversized beaks – often decorated with large casques – and their unusual breeding habits that make them truly fascinating.

There are 54 species of Hornbills in the world.

They comprise the order Bucerotiformes, which is sub-divided into 2 families and 9 genera. 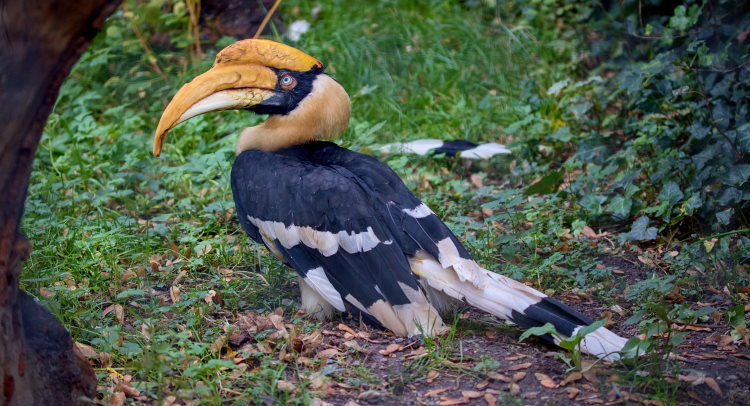 Hornbills are strictly ‘old world’ birds, meaning their range extends from Africa across India – and Asia to Papua New Guinea. They do not occur in the Americas, where a similar ecological niche of medium sized species is filled by Toucans.

Hornbills occupy a wide variety of habitat, from the Namib Desert to the lushest S. E. Asian tropical rainforest.

They have been known to mankind for a long time and feature in many ancient customs and myths. The distinctive features given to their skulls by their large beaks and casques has resulted in these skulls being used in ceremonial head gear. In ancient Rome they were known as Rhinoceros birds.

Hornbills are the only birds in which the first two vertebrae (the axis and atlas) are fused together.

They are also the only bird with a two-lobed kidney – all other birds having a three-lobed kidney.

Though Hornbills live in a wide range of habitats, they prefer mature forests and over 75% of the 54 species are forest dwellers.

They have long bills which help them collect food items from branch extremities – which they would not otherwise be able to reach. They have short, broad, rounded wings which are good for short bouts of flying – but not for extended periods of flight.

Males are usually larger than females, being up to 17% heavier and with up to 21% greater wingspan. 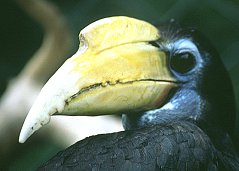 PinThe ‘Casque’, the outgrowth which adorns the top mandible of the bill of so many species, is hollow and composed of the same keratin which lines the entire bill.

The casque is probably important as an indication of the age, sex and status of an individual bird. The casque is poorly developed in some species, but large and very evident in others.

An interesting exception to the above comments is the Great Helmeted Hornbill (Buceros vigil), where the front end of the casque is solid ‘ivory’ and so in this case the skull comprises 11% of the adult bird’s weight.

At the other end of this continuum, and 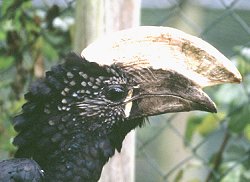 Pinof more average size, are a number of species including the Great Pied Hornbill (Buceros bicornis) and the Narcondam Wreathed Hornbill (Aceros narcondami), which are predominantly frugivorous.

Few species appear to need water to drink, most gaining all the moisture that they need form their food.

Like most animals, the food taken by hornbills varies throughout the year depending on what is available.

All hornbills (so far studied) breed as monogamous pairs.

They all breed in existing holes or crevices – normally naturally occurring ones – either in trees or rocks.

The fascinating thing about Hornbills is that the female seals herself up inside the cavity and then proceeds to moult all her flight feathers in one go, while she is incubating the eggs. In some cases the males help seal the female in.

The end result is a narrow slit opening, which is just big enough for the male to offer food through. 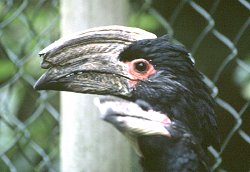 The female and the young are then fed by the male, who brings food to the nest and passes it inside. This undoubtedly helps to protect the female and young from predation. But it also causes problems of sanitation and makes a lot of work for the male.

The two Bucorvus species nest in open cavities – rolling stumps, etc – the nest is not sealed and the female emerges daily to preen and defecate.

The larger species can be very long-lived.

A pair of Northern Ground Hornbills lived for 40 years as adults in captivity. Even smaller species live for a reasonable length of time, a Tockus hermprichii survived 22 years in captivity and a Tockus nasutus survived for 20 years .

The sanitation problems are dealt with in part by the female defecating out of the entrance slit or by passing soiled nest lining out of the nest. Some species do neither of these things and appear to rely on having a large stock of dry lining materials to soak up the mess of faeces and dropped food.

Many species, even those which forage in flocks, maintain the pair bond throughout the year. However, given the workload carried by the male during the breeding season, it is not surprising that helpers at the nest have been observed – or are suspected – for about one third of the Hornbill species.

This is the highest occurrence of co-operative breeding in any order of birds. The helpers are usually young of the they previous year, but can be adult males.

Incubation begins with the first egg laid, which means that the young hatch out in sequence rather than altogether.

In the larger species, only one or two eggs are laid – but in the smaller species as many as 8 eggs may be laid. This inevitably produces a succession of variably sized young. The percentage of young which survive will depend on the number of helpers and/or on the amount of food available.

Incubation takes from between 23 and 46 days. The larger the species, the longer the incubation period. This correlation between size and developmental time also applies to the fledging period (the time it takes for the young to develop sufficient plumage to be able to fly).

Many Hornbills and other Bucerotiformes are relatively large forest birds and require large expanses of forest, with many old trees for nesting – in order to maintain a viable breeding population.

While tropical rainforests are being felled at 95 square miles per day – to supply the first world with pretty doors, furniture, scaffolding and disposable chopsticks – the future is not terribly secure for any Hornbill or other large forest resident.