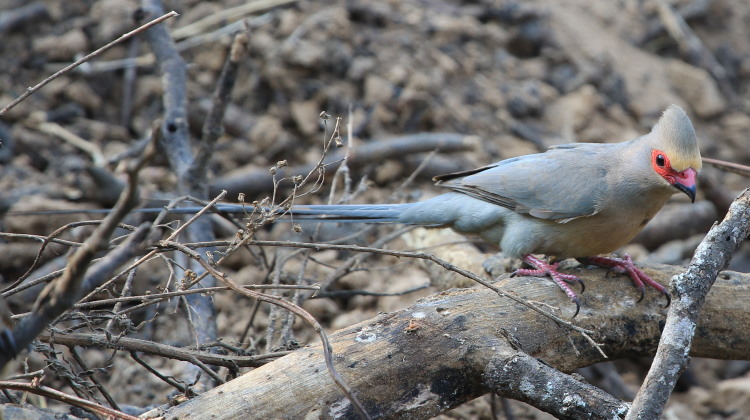 The Coliidae are a small order of 6 species of birds all in the one genus, Colius.

Collectively they are known as Colies or Mousebirds, because of the way they clamber around in dense vegetation. They occur in Africa, south of the Sahara.

Here are some basic facts:

They have the curious ability to direct all four toes forward like Swifts, a formation called pamprodactylous or pamprodactyl feet..

Both sexes have crests on their heads.

Generally speaking they are dullish, unremarkable birds, except for the lengths of their tail and their unusual mannerisms. Their feathers have a prominent after-shaft which gives their plumage a fluffy appearance.

They have only ten tail feathers.

Mousebirds are gregarious animals, living in small to medium sized flocks with a definite leader.

Mousebirds inhabit a variety of habitats from savannah to forest edge and from sea level to about 2400 m (8,000 ft), but are not found within the true forest.

Mousebirds are fairly noisy, emitting a constant chatter of tsik tsik call notes when foraging or flying in a flock. They are all non-migratory. Mousebirds feed on fruit, buds and leaves of a variety of vegetation. They are a pest of fruit crops in some areas of Africa especially as they eat the buds as well as the fruit.

The nest is a well-lined cup hidden in dense vegetation often close to the ground. One female lays 2-5 whitish eggs, but more than one female may lay in one nest and two females have been observed incubating one nest side by side. Both males and females co-operate in building the nest, incubating the eggs and raising the young.

More than one male may assist in feeding the young of a given nest. The young are altricial (meaning that they are born helpless, without feathers). Though the eggs are laid over a period of time, incubation begins when the first egg is laid, meaning the young hatch at different times leading to a group of chicks at different stages of development.

This is less usual in birds than the opposite strategy of waiting until all the eggs are laid before starting incubation, thus ensuring the young all hatch fairly close to each other in time.

The eggs probably take 2-3 weeks to hatch and a further 4-6 weeks to fledge.

No Mousebirds are currently listed on the ICBP endangered list.

Perhaps now you’d be interested to learn a little about the Limpkins.