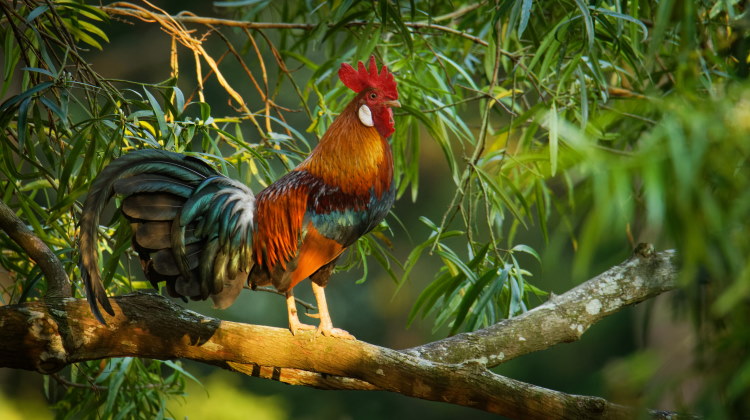 The Craciformes are a smallish order composed of two families – that were for some time considered to be part of the Galliformes (Pheasants, Turkeys, etc.).

The two families are the Cracidae (Guans, Curassows and Chachalacas) and the Megapodidae (Brush Turkeys and Malleefowl).

They are both fairly primitive groups of birds.

There are 22 known species in 7 genera, all of which have an Australasian distribution.

The Megapodes have two other general common names, which refer to their only claim to fame in many people’s minds, i.e. mound builders and incubator birds. A reference to their unique habit of incubating their eggs in mounds of earth and vegetation.

They are the only family of birds in which neither of the adults have any contact with the eggs. This does not mean that the adults do not care for their eggs. On the contrary, some Megapodes put a huge amount of energy into preparing and maintaining their nests.

Megapodes can be divided into three distinct groups, the Jungle Fowl, The Brush Turkeys and the Malleefowl.

Jungle fowl comprise 5 species in 3 genera, the best known of which is Megapodius freycinet, the Scrubfowl or Common Scrubhen. This bird is found over much of Australia, New Guinea, the New Hebrides, the Solomon Islands, the Bismarck Archipelago, as well as the Philippines, Borneo and the Nicaban Islands in the Indian Ocean.

Brush Turkeys have one species in Australia, ranging east of the Great dividing range and several species in Papua New Guinea and its accompanying islands. The Malleefowl, Lepoa ocellata, is found across most southern and Western Australia.

Most Megapodes are brownish, cryptically coloured birds which like to keep out of the way. They feed much in the manner of chickens, deep within scrub – scratching over the leaf litter and eating a mixture of vegetation and invertebrates, depending on what is available.

The Malleefowl is the only species in its genus and is listed in the ICBP threatened species list.

Malleefowl have the most complex nesting habits of all the Megapodes.

A male will commence constructing an incubation mound months before the breeding season. He first scrapes a hole in the ground (Megapodes = big feed) about 0.5 m (1.5 ft) deep. On top of this he piles all the vegetation he can find, as well as nearby topsoil.

The resulting mound will be about 5 m (16 ft) across and 1m (3 ft) high. He then keeps watch over this mound, chasing away females until he is satisfied that the nest is in the correct condition to incubate the eggs. Once he is satisfied, the female or females is/are allowed to lay their eggs.

Several females and up to 35 eggs have been reported from one nest.

In the Australian outback, the nights can be as unpleasantly cold as the days are hot – yet the male Malleefowl can maintain a constant temperature within the nest by adding or removing nest material as required. As with the even larger nests of the Scrubfowl, nests may be used for a number of years in succession.

Similar, but slightly less complex nesting rituals are shown by the Scrubfowl – whose ancient nests may be 12 m (36 ft) across and 5 m (16 ft) high. Also similar are Brush Turkeys, Alectura lathami, whose nests are similar in size to a Malleefowl.

Less evolved species such as the Moluccan Megapode, Eulipoa wallacei, simply dig a hole in the soil, lay the eggs and then cover them up. No further control is exercised.

Whatever the size and complexity of the nest, the young hatch underneath the soil and vegetation and have to climb up out of the nest unaided. They have to forage for themselves from day one in order to survive – they receive no instruction or post-hatching protection from the parents at all. The eggs take as long as 8-9 weeks to hatch.

Eight species of Megapode are currently listed as endangered by the ICBP.

Some other species exhibit interesting variations on this general nesting theme, laying their eggs near volcanic outlets and hot springs in order that the heat from these will incubate the eggs. The Niuafo’ou Megapode, found only on the island of Niuafo’ou (Tonga) actually lays its eggs in hot volcanic ash.

The Cracidae form a fairly compact group of 30 species in 11 genera.

These are conveniently divided into three groups:

All the Cracidae resemble pheasants or turkeys, to which they are related and are relatively large birds.

They are all central and south American birds ranging from southern Texas to northern Argentina or Uruguay. They feed primarily on fruits and seeds, with the occasional insects and small vertebrates in the larger species.

They are all arboreal to some extent with the Curassows spending 50% of their time in the trees with the two smaller groups spending a far greater percentage of their time away from the ground. They have large heavy tails and large feet.

They nest in trees and the precocial young are extremely adept at clambering around in the vegetation. Unusual even for precocial birds, the young hatch with partly grown flight feathers and can fly within a few days of hatching and leaving the nest. The eggs are normally white and incubation is by both sexes. The eggs normally hatch in 22-35 days, for those species about which we currently know.

All the groups are renowned for being noisy birds, and the Chachalacas are named after their most common call.

Many of the Curassows sport curly crests, while Guans have bare brightly coloured skin patches on their heads and necks. Notably decorated are the Horned Guan, Oreophasis derbianus – which has a reddish horn projecting up from its head – and the Razor-billed Curassow, Mitu mitu, which has a huge hornbill-like, red upper mandible to its bill.