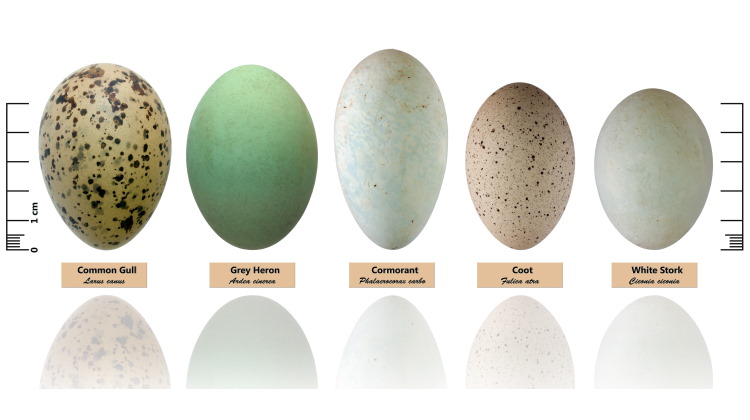 Bird eggs are a glorious, wondrous feat of engineering.

We are all of us aware of how nutritious a hen’s egg is.

And as hen’s eggs are easily available, it is worth gently cracking one into a shallow bowl in order to have a good look at it – before you cook and eat it.

If you look carefully, you should be able to see not only the yellow yolk – but perhaps also the white circle marking the germinal spot within it. This germinal spot is never well developed in unfertilised eggs, however in the naturally fertilised egg of a wild bird, it would be the beginning of the new baby bird.

You should also be able to see that the ‘white’ or ‘albumen’ comes in two different forms.

Some of it is thick and retains a certain amount of shape around the yolk. And some is runny and flows all over the place.

You may also be able to determine the two whitish, twisted, stringy ‘chalaza’ – one on each side of the egg. Part of these may remain inside the egg shell after you have tipped the rest of the egg out.

The most visible thing about an egg is the shell.

This is white in some birds and coloured in others.

Birds with white eggs tend to be either those who lay their eggs in dark and enclosed spaces, such as holes in trees or special nests (i.e., Owls and Kingfishers) or primitive birds, such as Pelicans and Cormorants.

Note: that reptiles, from whom the birds evolved, bury their eggs and have no reason for them to be anything but white, which they are.

Birds which lay their eggs in more open and visible places have more coloured eggs.

Mostly this colouration is ‘cryptic’, i.e. it helps make the egg hard to see against the background.

In some species which nest on the ground, this cryptic colouration is excellent. And in some species, such as the Indian Yellow-wattled Lapwing (Vanellus malabaricus) – the bird’s eggs are a different colour in different habitats, to match the different substrates!

Colour is added to the eggshell in the uterine region of the genital tract.

The colours are derived from pigments obtained as breakdown products of blood. Reds, browns and blacks coming from Haemoglobin and blues and greens from bile pigments.

The colours are added in patches, as the egg moves through the tube.

The pattern of the colours – whether it has dots, streaks or swirls – is controlled by the speed of the egg as it passes through the uterus and the degree of turning it undergoes while passing through.

In Francolins, 28% of the weight of the egg is shell.

The eggshell is not a solid structure, but has minute holes in it called pores.

These pores allow gases to pass in and out of the egg. This is important because in developing and growing, the embryo needs oxygen for metabolic respiration – just like you and me.

Inside the eggshell are a series of 3 membranes called the amnion, chorion and allantois.

Together they are called the chorioallantois. There are many blood veins running through this complex membrane, which serves as a sort of external lung for the developing chick. It’s responsible for collecting oxygen from (or passing carbon dioxide to) the inner shell lining and therefore through the shell and into the outside world.

The eggshell is made of calcium carbonate, CaC03, which is collected by the female all year and stored in her leg bones until needed.

In this way she can collect enough calcium carbonate from her food to make all the egg shells she needs during the brief egg-laying period.

Egg yolk is actually not just a blob of yellow in the centre of the egg.

Looked at carefully, it can be seen to be a series of concentric, thickish layers of yellow yolk – with very thin layers of white yolk separating them.

The amount of yolk in an egg varies from species to species.

Kiwis not only lay the largest eggs in proportion to their body weight, but also have the highest percentage yolk content, over 50%. In other species of birds, the percentage of egg yolk varies from about 50% in ducks to about 15% in cormorants.

As a general rule, species with ‘Precocial’ or ‘Nidifugous’ young have less yolk than those with ‘Altricial’ or ‘Nidicolous’ young.

The albumen or white is the developing embryo’s chief supply of water… and also acts as a shock absorber and temperature regulator for the very young embryo.

The embryo always rests on the top of the yolk.

This is to ensure that the yolk, which is quite dense, does not crush the early embryo.

However, in order to keep the temperature even within the egg, incubating birds must occasionally turn the eggs over.

Also, the eggs of some birds can roll around in their minimal nests. Therefore, in order to ensure that the egg yolk always remains the right way up, it is suspended within the egg from the long ends by a pair of jelly-like springs called the ‘chalaza’.

These anchor the yolk and ensure that, even when the egg is rolled over, it always has the embryo on top.

Baby birds hatch from the egg in two distinct forms.

Some, like ducks, are fully feathered and able to leave the nest straight away. These are now called ‘Precocial’ young, though the term ‘Nidifugous’ = ‘Nest fleeing’ was used in the past and can still be found in many books.

Others, like pigeons, are hatched with few feathers and are unable to stand on their own. These obviously cannot leave the nest immediately and are referred to as ‘Altricial’ young. Though they were called ‘Nidicolous’ = ‘Nest hugging’ young and – as above – you may find this older term in many books.

When the embryo is fully formed it spends some time within the egg making occasional cheeping noises.

This helps both the adults and other chicks – hatched and unhatched – know it is about to hatch.

Hatching is a difficult process for the young bird, but is made easier by two adaptations.

The first of these is the egg-tooth, a sharp projection on the top of the upper mandible of the bill – designed to help the young bird break through the shell.

The second is the enlargement of the ‘complexus’ muscle in the neck. It is this muscle that allows the chick to keep banging and scraping away at the inside of the shell until it breaks through.

After hatching the egg tooth disappears and the complexus muscle becomes greatly reduced in size.

Well, we hope you enjoyed learning all about the magic of the bird egg!

Perhaps now you’d like to learn about a bird’s sense of touch.