The Wonder of Bird Feathers

Feathers are one of the most prominent features of a bird’s anatomy… and they are unique to birds.

Firstly, they provide insulation, this is very important in a warm blooded animal (body temperature of most birds is maintained at around 40C). It is believed by most scientists that this insulating effect was the primary force driving the evolution of feathers.

Secondly, feathers allow for flight. Scientists believe that flight evolved in birds as a result of their possessing basic feathers and that this added selective pressure to the evolution of feathers – making them larger, stronger and refining their structure.

Thirdly, feathers control what a bird looks like. A plucked chicken or pigeon looks very different to a fully feathered one. Feathers supply the bird with colours allowing for camouflage, secondary sexual characteristics and sexual display.

Just consider the tail feathers of a peacock.

Feathers evolved from reptilian scales, and in fact birds still possess scales in the lower parts of their legs and feet.

Feathers grow quickly and are then sealed off at the base. Once fully developed, a feather is a dead matter like your finger nails – though there are still muscles attached the base of each feather which can move each individual feather to help keep it in place.

Feathers do not last for ever, they become worn and battered and are replaced regularly by the bird once or twice a year depending on species. This replacing of old feathers is called moulting.

A Flight Feather showing the Calamus, Rachis and Vane or Blade

Feathers have a basic form of a central hollow supporting shaft called a ‘rachis’ and a number of fine side branches. These side branches have even finer sub-branches in contour feathers.

Barbs and Barbules along the Rachis of a flight feather

The side branches in these are called barbs and are linked together by a set of barbules and their hooklets, sometimes called ‘Hamuli’. Barbs have side branches of their own called barbules. The upper ones containing a series of hooklets and the lower ones – without hooks but slightly convex in form – to catch the hooklets of the barbules from the next barb along the shaft.

This is perhaps best understood by seeing the diagram. The base of the feather – where their are no side branches – is called the calamus or quill. At the base of this is the hollow entrance that was used by blood veins to carry nutrients to the growing feather when it was alive – this is called the Inferior umbilicus.

The gripping effect of any one set of barbule hooklets is not great, but like the threads that hold your clothes together, the combined effect is sufficient to keep the feathers together.

Playing with any wing feather can demonstrate the affect of these tiny attachments. The overall presence of all these barbs and barbules together is called the vane of the wing.

The rachis and the vane are the two parts of a bird’s feather you will see with the naked eye.

A bird has many different sorts of feathers, which perform different jobs.

The largest feathers are contour feathers. These give the bird its shape and colour and include both the flight feathers, called ‘remiges’ and the tail feathers called ‘retrices’.

Remiges and retrices are the long strong feathers you most commonly found as a kid.

These two here came from a British Magpie – and as you can see they have different shapes. One is a wing flight feather, a remige, and it is asymmetrical i.e. the vane is much smaller on one side than the other.

PinThis is because the pressures on the ‘leading edge’ of the flight feather (the part that faces forward) are far greater than those on the trailing edge. If the leading edge vane was as large as the trailing edge, it would soon become very ragged and not work properly. 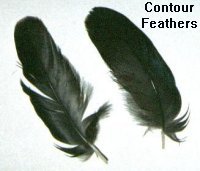 PinThe rest of the feathers you see when looking at a bird are the ordinary body ‘contour feathers’. These give the bird its characteristic smooth round shape. They also give the bird its visual colouring and provide a first level of defence against physical objects, sunlight, wind and rain. They are very important. 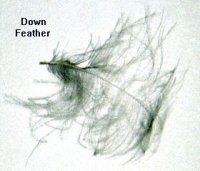 The next most important feathers on a bird are the down feathers. These are smaller and lack the barbules and their accompanying hooklets, so they are not zipped together and do not look so neat.

In fact, they are soft and fluffy.

They provide most of the insulation… and are so good at this, that mankind for many years used to collect the ‘down’ from various birds to put into sleeping bags and eiderdowns to keep us warm at night. The term eiderdown arose because the softest and best insulating down was collected from Eider ducks (Somateria mollissima).

In down feathers the side branches are longer than the rachis.

There are four other main types of feather.

These are Semiplumes, Filoplumes, Bristles and Powder feathers

Semiplumes are half-way between a contour feather and a down feather. These occur between the contour feathers and help to supply insulation and a certain amount of form as well.

Filoplumes and bristles are much smaller. Filoplumes have only a very few barbs at their tips and are believed to have a sensory function, helping birds keep their feathers in order.

Bristle feathers have practically no barbs at all and are stiff. They occur around the eyes and mouths of some birds and are protective in function. They are particularly evident in the honey buzzard (Pernis apivorus) for instance, which feeds on the nests and young of social bees and wasps and needs protection around its beak from the stings of the adult bees and wasps.

The fourth main types of feathers are Powder Feathers.

These are unusual in that they grow continuously and that they disintegrate at the tip. The barbs breaking down into a fine powder that, in Herons at least, is useful in mopping up the slime and dust that gets on their fronts during feeding. Thus they help keep the plumage clean.

Powder feathers occur scattered throughout the plumage of most birds, but their function is not well understood.

Brood patches are areas where the feathers fall out during – or immediately prior to – incubation of the eggs.

These areas of bare skin on the birds abdomen are heavily infused with blood vessels and allow the incubating adult bird to transfer heat to the eggs, thus speeding up development of the embryo.

Brood patches are either one large patch, or several smaller patches equating with the number of eggs – i.e., Herring gulls which normally lay 2-3 eggs have 3 brood patches.

Brood patches are necessary because feathers are such good insulators that none of the adult’s body heat would reach the eggs without them.

Some feathers, particularly in the more primitive orders, have a secondary smaller and less complicated shaft arising from the based of the calamus – this is called an aftershaft.

Feathers are made of keratin, a protein which is also used to make horn and hair in different animals – and beaks in birds.

Owls have the outer ends of their flight feathers lacking in barbules, i.e., they are unzipped – this makes the edges softer and reduces the noise they make. Silent flight helps an owl catch its prey. 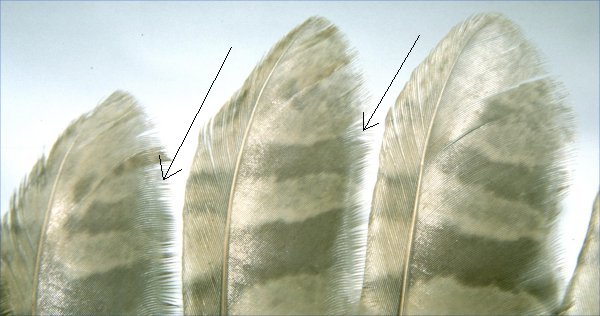 The number of feathers a bird has depends very much on its size and where and how it lives. In general, a third of a birds feathers are on its head.

The bird with the least feathers is the Ruby Hummingbird Archilochus colubris with only 940 feathers in total.

The bird with the most feathers is the Whistling Swan Cygnus columbianus which can have as many as 25,000 during winter.

The longest feathers in the world belong to an ornamental chicken – bread in Japan in 1972, this specimen had tail feathers 10.59m or 34.75ft long.

The longest feathers of a wild bird belong to the Crested Argus Pheasant Rheinhartia ocellata which commonly reach lengths of 173cm or 5.7ft.

Birds have good eyesight and colour is important to them.

A bird gets its beautiful or cryptic coloration from its feathers. Feathers in turn get their colours in two ways.

Firstly, coloured pigments can be present in the Keratin. These can be firstly melanins, which range from black to light tan and also produce grays. Melanins are usually Eumelanin and Phaeomelanin.

A third group of pigments consist of Porphyrins. These are mostly brown in colour (Coproporphyrin III) but can also be red, uroprophyrin – or green, Turacoverdin.

Birds can manufacture melanins in their own bodies, but can only acquire carotenoids through their food.

Flamingos are a fine example of this. If they do not get the right molecules in their diet, which occur naturally in their wild diet, then they lose their stunning pink colouration. Early zoos had great problems keeping their flamingos coloured before this was understood.

Birds, of course, exhibit a much greater range of colours than blacks, browns, reds, oranges and yellows. 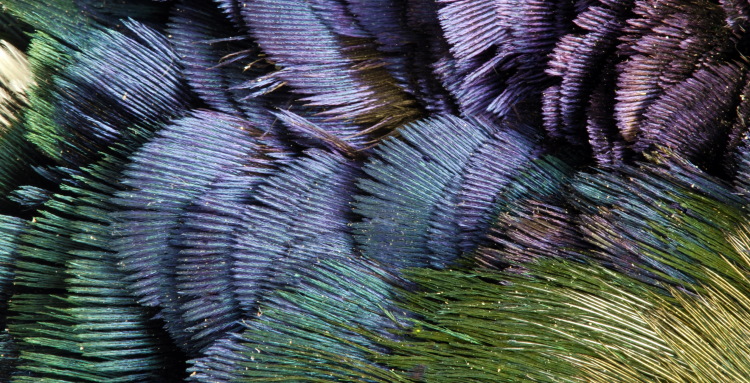 Green and blue iridescent feathers in the Golden Pheasant

The blues, greens and other iridescent variations arise from the physical presence of minute structures on the surface of the feathers, which reflect only one wavelength of light.

This creation of colour via refraction or light is not unique to birds. Some fruits and insects such as the Morpho butterfly use physical microstructure to reflect selective wavelengths as well.

Blue and White are normally a structural colour, as is green. Though green may often be a mixture of structural and pigmental iridescence.

When we look at a bird, we see usually only the tips of the contour feathers.

These tips can be a different colour to the rest of the feathers. Because feathers get worn away at the tips, this can cause a bird’s plumage to change colour as the feathers age.

Many passerines use this method to have one plumage in winter and a more colourful one in spring. They gradually acquire their breeding plumage through abrasive wearing away of the dull – or cryptically coloured – tips to reveal the brighter plumage beneath.

Snow buntings and Chaffinches are two good examples of this.

Well, we hope now you’ve learned everything you wanted to know about the (not so) humble bird’s feather! 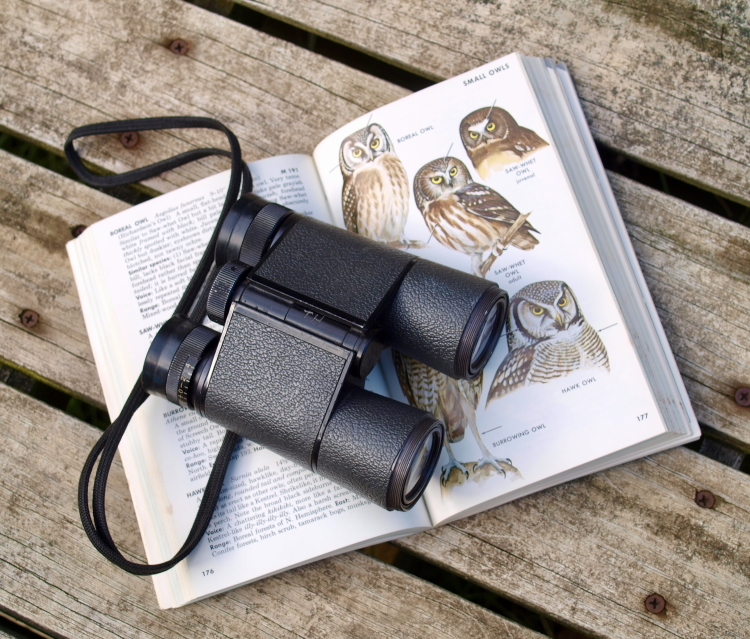