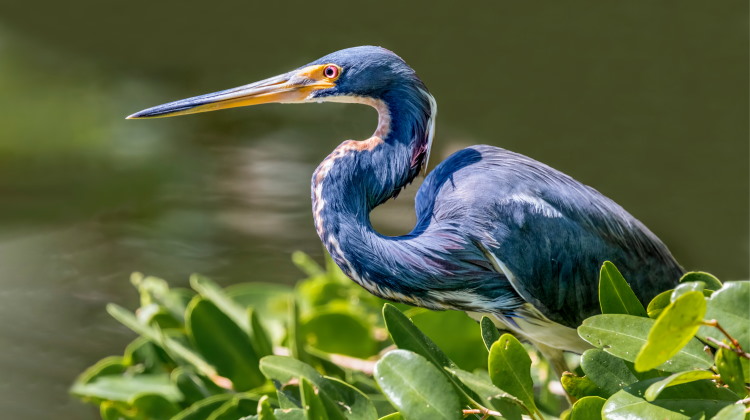 However a closer look soon allows you to recognise them.

There are 59 known species in the world, though several are very rarely seen and at least 20% of them are endangered. The main difficulty facing Bitterns, Herons and Egrets (now that hunting for feathers is no longer commercially viable) is habitat destruction.

One of the great environmental crimes of this century is the continued draining and logging of fragile wetland habitats.

Herons and Egrets are long-legged, long-necked and generally long-billed birds.

They are all carnivorous most feeding in or near water taking fish, frogs, lizards and insects. A number of species though, such as the Black-headed Heron of Africa (Ardea melanocephala), prefer to feed on land taking a variety of lizards, snakes and insects depending on their size.

They use a variety of hunting techniques, including:

Prey flushing actions such as ‘Foot Stirring’ and ‘Wing-flicking’ can be used in conjunction with a slow walk or a ‘walk-stop-walk-stop’ hunting method, as well as when standing still.

Though most species feed on aquatic or terrestrial animals, some species such as the Squaco Heron (Ardeola ralloides) and the Slaty Egret (Egretta vinaceigula) are happy to snap up flying insects as well.

Other variations include the Yellow-crowned Night Heron (Nycticorax violaceus) a surprisingly short billed species, which is a successful specialist on crabs. As well as the Nankeen Night Heron and the Black-crowned Night Heron which are inveterate nest robbers feeding heavily on both eggs and nestling.

Some species, however, notably the Black Heron (Egretta ardesiaca), will feed in flocks. This species is also notable for its habit of using its open wings to form an umbrella under which it feeds.

Another flocking feeder is the Pied Heron which has learned to collect at sewage farms to feed.

Finally and perhaps most interesting is the widely distributed Green-backed Heron (Butorides striatus), which among a complete range of other feeding techniques, has learned to bait fish.

It does this by dropping an insect or piece of vegetation onto the surface of the water – and then catching any fish that rise to investigate this potential food!

Bittern, Herons and Egrets are short-tailed, if not tail-less birds.

Herons and Egrets hold their long necks in an ‘S’ shape with the head held back between the shoulders. They fly with the neck and head held like this, which is a unique trait distinguishing them easily from Storks and Cranes which fly with their necks extended straight out.

This is not so obvious in the Night and Tiger Herons, which are part way along a continuum of form stretching from the ‘Ardea’ Herons at one extreme to the much shorter necked Bitterns at the other.

Herons can only bend their necks in one plane.

They cannot move it sideways, only backwards and forwards. However, specially developed muscles allow it to be extended very rapidly making it an effective spear.

Herons and Egrets are in the same family and look similar, so what is the difference?

The name Egret comes from the French ‘aigrette’, meaning the plume feathers of the six species of white Egrets.

These are a special breeding plumage only occurring through part of the year. For many years they were popular in the fashion trade. Egrets were the Herons from which ‘aigrettes’ were obtained, so causing the death of many birds.

The term has since lost its original meaning and is now used to describe various members of the Heron family which do not have these plumes and which are not white.

All Herons have two or more patches of ‘powder-down feathers’ on their breasts. These feathers break up into a fine powder when crushed. The bird can use its bill to apply this down to areas of blood, mud or slime on its ordinary plumage. The powder down will absorb the mess and can then be scraped off using the serrated claw on the middle toe, so cleaning the plumage!

Some species of Heron nest and roost together in a certain tree or group of trees, i.e. the Grey Heron, Ardea cinerea. These Heronries are often quite a distance from feeding areas and the birds will commute sometimes several times a day between the two.

Many Heron and Egrets are expressive birds, with a wide range of display actions which they use during courtship. These involve modifications of other displays such as threat displays. They include forward and upward stretches, bill snapping and rattling, circling and pursuit flights.

Males will offer females twigs as gifts or as a hint that it is time to start building a nest.

Nests are usually built in trees and most species nest colonially, often in mixed colonies with other wetland birds such as Storks, Ibises and Spoonbills as well as other species of Heron.

During the courtship period many species undergo colour changes to the soft parts of the body. By soft parts, ornithologists mean those parts not covered by feathers such as the legs, bill and lores (the bare skin around the base of the bill).

These are often different in different races or sub-species and can also be important in species identification.

Most confused of all is the little Egret (Egretta garzetta) which comes in 6 distinct forms – 3 white, 3 dark.

The nominate race or the form by which all the others are defined is Egretta garzetta garzetta. It is white with black legs and bill and yellow eyes and feet. Form nigripes has black feet and form immaculata has yellow lores and black feet. The three dark forms are dimorpha which is dark blue with a white throat patch, black legs and bill with yellow feet and lores. Form gularis has its legs and bill yellow to brown and form schistacea is very varied and basically it is not any of the others and occurs in India.

Note: forms gularis and dimorpha are now considered to be separate species by some authorities.

In addition to plumes, many Herons have crests which are used in both threat and mating displays. Particularly fetching is the laterally raised crest of the Boat-billed Heron, a wide-billed species which looks almost human with its crest raised and head feathers fluffed up.

After courtship, mating and nest building 2-6 eggs are laid. Incubation lasts about 26 days in the Grey Heron but may be a day or two longer or shorter in larger or smaller species.

Both parents build the nest and feed the young. The young are born with a covering of down and eyes open, but are still fairly helpless. At first they are fed with regurgitated food. Initially, it is regurgitated into the young bird’s mouth but later only onto edge of the nest.

The young will be ready to leave the nest after about two months.

Well I hope you’ve learned a bit about the wonderful family Ardeidae.