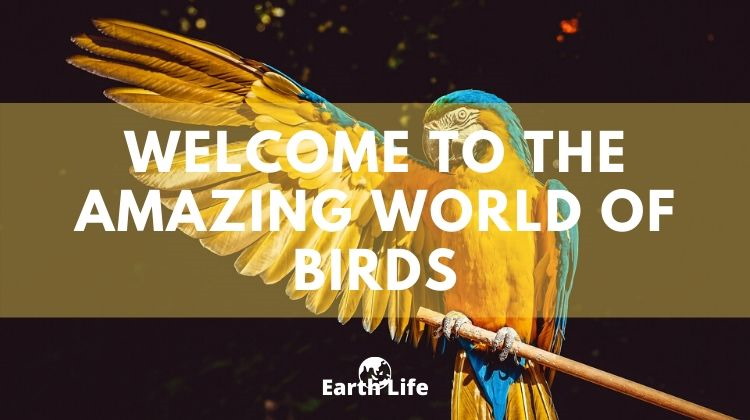 Welcome to the beautiful, the wonderful, the amazing world of birds!

Birds are truly beautiful creatures. They’re fascinating and constantly surround us – roosting and nesting on our buildings, feeding in our gardens and picking through our refuse dumps. They’re easy to find and fun to observe.

In fact, birds are probably the most beloved group of wild animals on the planet.

Their ubiquitous presence, colorful form, intelligent actions and cheeky mannerisms endear them to us all. Let’s just say birds are easy to love!

The existence of societies like the National Audubon Society of America with 550,000 members and the RSPB – originally of the UK – with over 1,000,000 members are a testament to this and just how popular birds are.

So, enjoy these amazing bird facts…

How Many Species of Birds?

There were about 9,703 bird species divided up into 23 orders, 142 families and 2,057 genera according to (Sibley and Monroe 1992), which was the figure I gave when I first wrote this page more than twenty years ago.

There were 10,021 bird species in the world at the end of 2013 according to the The Howard and Moore complete checklist of the birds of the world, 4th. ed., Vol. 2

In an amazing paper published in 2016 by George F. Barrowclough ,Joel Cracraft,John Klicka,Robert M. Zink suggests that the actual number of distinct biological species of birds on this planet may be in excess of 18,000.  They suggest there are many species we have not recognized as such yet.

I will leave at that for now, with population numbers currently in rapid decline for numerous bird species across many countries the more important question is.  When are we as a species going to learn to care for the beauty that surrounds us?

How Many Birds All Together

Birds can be found on all major land masses – from the poles to the tropics – as well as in or over all our seas, oceans and their accompanying islands.

The total number of birds on the planet is very difficult to estimate because their populations fluctuate seasonally, but scientists have suggested that there may be between 100,000 and 200,000 million adult or near adult birds on the planet at any one time.

Of these, the most common or populous wild bird in the world is the Red-billed Quelea (Quelea quelea) from south of the Sahara in Africa.

These birds are so prolific that they are serious grain pests and millions are killed at roost sites every year in a vain attempt to control their numbers.

The rarest bird in the world is much harder to estimate because though a large number of birds are rare, in most cases the exact number of birds left living for any given species is impossible to ascertain.

Some species have been recognized as rare for a long time.

These include the Sudanese Red Sea Cliff Swallow (Hirundo perdita) seen only once in 1984 and the Orange-necked Partridge (Arborophila davidi) seen just a single time in 1927.

Other birds are known or believed to be extinct in the wild, but still have some representatives living in captivity. A good example of this is the Spix’s Macaw (Cyanopsitta spiscii), hunted to the brink of extinction to satisfy the foolish demands of the pet trade.

Since the 1600s at least 115 species of bird are known to have gone extinct, mostly as a result of human interference of one sort or another.

However, we humans are not all bad and sometimes the good guys win!

A prime example of this is the Mauritius Kestrel (Falco punctatus), once down to 4 wild individuals – but now there are more than 300 in the wild.

Also the Californian Condor (Gymnogyps californianus), which after the last wild male was caught in 1987 was down to 27 individuals all in captivity… however by 1994, captive breeding had brought the population up to 75 with 9 in the wild.

The Most Common Bird

The most common bird in the world is probably the Red Junglefowl (Gallus gallus).

The most widespread and commonly seen wild bird in the world is probably the European House Sparrow (Passer domesticus), which was transported all over the world by European settlers and can now be found on 2/3 of the land masses of the world including New Zealand, Australia, North America, India and of course Europe.

The other contender for the commonest bird is the Red-billed Quelea (Quelea quelea) of Africa, whose population (while restricted to a part of Africa where it is considered a serious pest by farmers) is estimated to be around 1.5 billion birds.

The Largest Bird In The World

There are 3 possible ways to measure the largest bird: heaviest, tallest and/or longest wingspan. However, whatever way you choose, the records are all held by extinct species.

The heaviest bird ever was probably the extinct Dromornis stirtoni from Australia. This flightless giant lived between 1 and 15 million years ago, probably stood nearly 3m/10ft tall and weighed in at a massive 500kg/1100lb.

The tallest bird ever was – as far as we know – Dinornus maximus, a Giant Moa from New Zealand. This giant, though only half as heavy as the Australian Dromornis, stood an incredible 3.7m/12.1ft tall.

Another extinct bird, this time from South America, has the record for the largest flying bird and longest wingspan. The Giant Teratorn (Argentavis magnificens) had a wingspan of at least 6M/19.5ft and could possibly have been as large as 7.5m/25ft.

That is living now!

As with insects, spiders, lizards and amphibians… living species are all smaller than their extinct ancestors. However they are still pretty impressive!

The largest living bird is without doubt the Ostrich (Struthio camelus). This ever popular bird stands a magnificent 2.74m (9ft) high and can weigh as much as 160kg (353lb).

The heaviest flying bird is the Kori Bustard of Africa (Ardeotis kori). A number of specimens have been scientifically recorded weighing 19kg (42lb) and even heavier specimens have been reported but not confirmed. Close runner-ups are the Eurasian Bustard (Otis tarda) and the Mute Swan (Cygnus olor), both of which have been recorded at 18kg or (40lb).

The title of ‘Bird with the Longest Wings’ also has several close contenders.

The Andean Condor (Vultur gryphus) has a well recorded wingspan of 3m (10ft). The Maribou Stork (Leptoptilus crumeniferous) boasts a known wing span of 2.87m (9ft 6ins) and an unconfirmed report of a specimen with a 4.06m (13ft 4ins) measurement are undoubtedly the longest winged birds on land.

However, the real record holders for the largest wing spam are birds that live at sea!

The Royal Albatross (Diomedea epomophora) has been regularly recorded with a wingspan of 3.5m (11ft 6ins). However the Wandering Albatross (Diomedia exulans), which has a similar average wingspan holds the scientific record for wing length.

A male caught and measured by the Antarctic research ship USNS Eltanin in the Tasman sea in 1965 had a wingspan of 3.63m (11ft 11ins) and so holds the crown for having the longest officially recorded wings in a living bird. However, as with all these records, there are other unconfirmed reports of even larger specimens.

The Smallest Bird In The World

The smallest bird in the world is generally agreed to be the Bee Hummingbird (Mellisuga helenae) from Cuba, which weighs a mere 1.6g or 0.056oz.

Shortest wings and body length are not really appropriate measurements because they are disproportionately affected by whether or not the bird is flightless and its beak length respectively.

Another major contender for the smallest bird is the Little Woodstar (Acestrura bombus) from South America.

Both these tiny miracles of life fly very competently. The smallest flightless bird is the Inaccessible Island Rail (Altantisia rogersi), reaching a mere 12.5cm/5inches in length and weighing 35g/1.45oz, this little beauty can only be found in the southern Atlantic Tristan da Cunha Islands.

What About Nests and Eggs?

The Ostrich = on average they are 15cm (5.9in) long, 13cm (5.1 in) in width and have a weight of 1.4kg. Although ironically, the ostrich egg is in fact the smallest egg in the world in relation to its giant body size.

The Vervain Humming bird (Mellisuga minima) has eggs that are the size of pea!

Many seabirds do not make a nest at all, nest on the ground – or in the case of a Fairy Tern on a branch of a tree.  Otherwise the award goes to the hummingbirds for their thimble sized (1cm squared) nests.

Quite a lot of information is known about birds and below are some more record breakers and facts.

But remember, nature still has a lot of secrets she has kept hidden! The Pheasant Lothura haitinensis from Vietnam only became known to science in 1986… so only time will reveal the whole truth.

Australian Pelican (Pelecanus conspicillatus) up to 47cm (18.5in).

Accurately measuring how fast a bird flies is extremely difficult, and many highly variable estimates have been made. Peregrin Falcons, Falco peregrinus, are claimed in various places to reach between 200kmh/124mph and 400kmh/  mph, however this is in a steep dive using gravity to increase their speed.  The Peregrin Falcon “Frightful” was recorded diving at 242 mph / 389 kmp whilst diving with her partner ken Franklin in 2005.

In level flight the situation is different.  The record for short burst of level flight goes to the Common Swift which were scientifically recorded at speeds up to 111.6kmh or 69.3mph by Per Henningsson et. al. in 2009.

The Wandering Albatross is also worthy of mention for maintaining a high speed a long haul flight, one bird was clocked maintaining 56kmh/35mph for 800km/500 miles.

Hobby Falco subbutea which can catch swallows and swifts in mid-air. Many hummingbirds can fly backwards and sideways as well as going vertically up and down.

Arctic tern Sterna paradisa from Kondalakaha Russia to Freemantle W. Australia. They breed on shores of Arctic ocean then fly to the Antarctic. One bird was caught 9 months after it was banded – 14,000 miles (22,530 km) away on the 29/11/73.

Many tales can be found about swifts, terns and albatrosses indulging in month or even year long flights without a break.  However as far as I know the record for the longest scientifically proven period of continuous flight goes to the Common Swift Apus apus.  In a paper published in 2016 Anders Hedenström showed that some migrating Common Swifts remained airborne for the entire ten month period of their migration.

Ruppell’s Griffon Vulture Gyps ruepellii recorded flying at 11,277m/37,000ft, at this height human beings would die from lack of air.

Emperor Penguin Aptenodytes fosteri with a dive of 534m/1751ft reported in the journal Condor in 1995.

Brambling Fringilla montifringilla a roost of 70 million birds was recorded in Switzerland in winter 1951/52.

Peregrin Falcon Falco peregrinus is found on every continent except Antarctica.

5 species of quails in the genus Coturnix they actually mature 5 weeks after hatching.

Barn Owls Tyto alba and kin, can catch a rodent in complete darkness.

The Bird with the Strongest Bill or Jaws

The rare Hyacinth Macaw (Anodorhynchus hyacinthinus) which lives on well protected foods such as Palm Tree – Pine nuts. They are also the largest flying parrot in the world.

Well, I hope you’ve enjoyed all these facts about birds!

Birds in general have been fairly well studied and there is a lot more known about them than listed on this page alone.

You can start to learn more by browsing through these sections of the site: