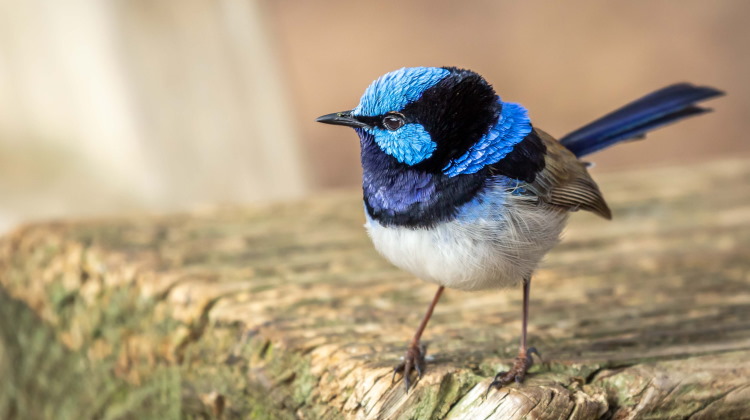 The Maluridae are a small family of often very pretty birds, endemic to Australia and Papua New Guinea.

The family includes 5 genera, one of which (Malurus, the Fairy wrens) occurs in both Australia and Papua New Guinea. Of the other genera, 2 (Stipiturus, the Emu-wrens, and Amytornis, the Grasswrens) are found only in Australia. While Sipodotus, Tree-wrens, and Clytomias, the Russet-wrens, occur in Papua New Guinea only.

There are 25 species all told, all of which are small birds ranging in weight from 5 to 40 grams.

Most species are obviously sexually dimorphic (having two forms), with males being brightly coloured in blues and black with some red and russet. While females are much duller brown, mottled birds.

The exception to this are the Grasswrens, the genera of which contains 8 largish species which are typically brown with white streaking. Most parts of Australia have 1 or 2 species as part of their fauna, though the distributions are skewed.

They range in size from the large distribution of the Variegated Fairy Wren which occurs over 90% of Australia to the highly restricted distribution of the Mallee Emu-wren, which is found only in an area of less than 100 miles square on the Victorian-South Australian border.

Apart from the fact that many of the males are very beautiful, Malurids are fascinating because most of those for which we have reliable data, have an unusual breeding system – involving a breeding pair having several helpers assisting them in raising the young.

Malurids are cocky little birds, with some species being happy to set up home in suburbia.

With their erect tails, they reminded European settlers of the common European Wren (Troglodytes troglodytes) but they are not closely related.

Most Maluridae have short stubby wings, which give them a good quick take off – but which are not designed for prolonged flights. In general, they are not that interested in flying and are content to hop, both legs together, around the trees or ground when they are foraging.

Different species live in a wide range of habitats, from the deserts of Central and Western Australia. to the tropical rainforests of Northern Australia and Papua New Guinea.

Most species are insectivorous. Most species spend most of their time close to or on the ground in fairly dense cover. They usually forage and live in family groups, consisting of a breeding pair and a collection of variously aged young from previous years.

Most species feed on a wide variety of arthropods, taking whatever they can in their hop-search-hop procession.

Some species have been greatly studied, while others are very elusive and difficult to observe (Emu-wrens) and thus little is known about them.

They are not migratory, though they will disperse outward during population explosions.

The best known Maluridae are all Fairy Wrens in the genus Malurus.

They live in family groups, with one breeding pair and a range of adult and immature helpers. Most of what we know of the social ecology of Fairy Wrens comes from studies of three species only (Superb, Splendid and Red-winged Fairy Wrens), so there may be much still to learn.

However, DNA studies have shown that at least 65% of young in any group were not fathered by any male in the group. For this reason, Fairy Wrens have been described as a monogamous social system with a promiscuous mating system.

Groups maintain fairly large territories, which include a mixture of feeding, breeding (nesting) and roosting sites. Territory size varies with habitat quality and the density of birds in the area. Territories are defended and maintained by singing regularly.

Persistent intruders will be chased, but actual fights are rare.

Normally, a bird or pair of birds looking for a territory will not try to oust a pair or group which are already in possession.

Songs are also used to allow group members to stay in touch and to recognise each other.

Courtship appears to consist of display flights and chases.

In 8 species of Fairy Wrens, males have been observed carrying a flower petal or fruit – always of a colour different to himself – during courtship. Sometimes he keeps the object, sometimes he presents it to the female, who may or may not accept the gift.

The basic pair-bond within Malurids appears to be a monogamous pair. This pair is often accompanied by helpers – immature and mature individuals – which help to defend the territory and feed and protect the young.

However, males, both the male of the primary pair and helper males, regularly travel into neighbouring territories to seek non-group females to mate with.

In this way most, and sometimes all, of the young raised by a groups are fathered by males from outside the group.

Normally, the breeding female builds the nest on her own. In some cases, if food is plentiful and the vegetation dense, a second female will build a nest after the primary female is sitting on her eggs.

The breeding season varies with habitat, which varies from cool temperate to tropical rainforest, and includes much desert. Most nests are small round domes built 1-3 metres above ground in low scrub or a grass tussock. The eggs are, for most species, dull speckled or spotted – and normally 2-4 are laid.

Females will lay again if the brood is destroyed and many females have a second and/or a third and even a fourth brood.

Predators cause between 10% and 45% failure in nests in studies, with the main predators being a mixture of birds, mammals and reptiles.

Fairy Wrens are sexually mature after 1 year of life, but do not normally breed until they are at least two years old.

Fairy Wrens have a maximum longevity of about 12-13 years, however, in the wild few live to be more than 6 years old. In those species which have been well-studied, between 30% and 40% die in their first year – after that the death rate slows down with between 15% and 50% of a cohort dying during each successive year (a cohort is all the birds born in a particular year).

Four species of Maluridae are known to be potentially threatened:

The main threats are habitat destruction and fragmentation, leaving small isolated populations that are likely to become too inbred to survive.

Habitats are threatened by drainage, fire, over-grazing, forestry and the invasion of feral species. These include plants as well as animals, such as rabbits, camels, donkeys, pigs, horses, cats, foxes and rats.