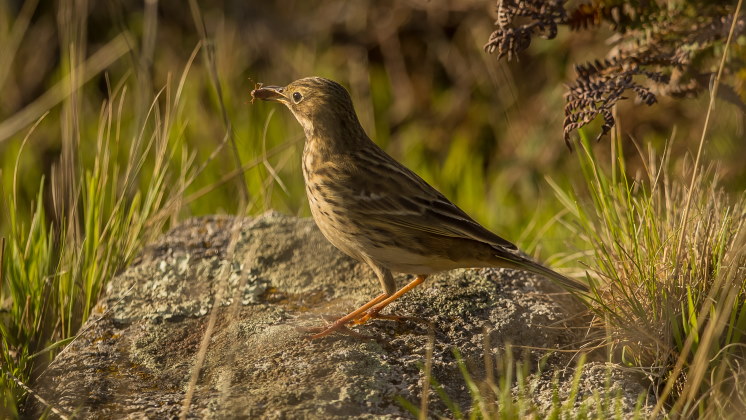 The Pipits and Wagtails have a world-wide distribution, except for the islands of the pacific – but the Longclaws are restricted to Africa.

The family is believed to be relatively modern with the oldest fossil records dating from the Miocene 6-7 million years ago.

All members of this family are relatively small to medium sized, but often very attractive, birds. Body length ranges from 12.7 cm to 22.2 cm (5 to 8.75 inches).

All species fly well and many are strongly migratory, particularly those that breed in the northern hemisphere. (The distributions mentioned in the below checklist are for the most part breeding distributions and do not cover over wintering distribution).

The Wagtails are generally the more colourful of the groups and are more associated with water, especially in the breeding season.

Although Yellow Wagtail, Moticilla flava, is also associated with herds of cattle where it can be seen running around the feet of the large herbivores feeding on the insects disturbed from the grass by the grazing cattle.

Some species are also commonly associated with human habitations and villages and even breed inside buildings.

Identification of the species of Motacilla is easier than for Pipits, although they have markedly different summer and winter plumages. They are slim birds with 10 primaries (albeit the 10th is minute) and their nostrils are not covered by feathers.

The Longclaws are closely related to the pipits but are larger and more colourful. They also have elongated hind claws and in the Yellow-throated Longclaw, Macronyx croceus this tendency reaches its extreme with the hind claw being twice the length of the rest of the foot (5 cm or 2 inches in length).

The Pipits make up the largest portion of the family and are birds of the open grassy areas, often common in the alpine zone.

They are all fairly similar in shape and colouration and identification without a good view is difficult. Far easier is identification by song, as all species have unique calls and songs.

Pipits are characterised by the presence of thin pointed bills, medium to long legs, plumages that are brown to buff with varying degrees of streaking.

Most species have little or no seasonal variation, the exceptions being Water, Buff-bellied, Rosy and some Rock Pipits. Like the rest of the family they are slim birds with 10 primaries and their nostrils are not covered by feathers.

All species are active lively birds that are a pleasure to watch. They have interesting courtship involving much chasing, particularly the White Wagtail, M. alba and a tendency to collect into small, and sometimes large, flocks outside of the breeding season.

All members of the family are insectivorous, although some of them will take other invertebrates as well.

They are linked by their common general shape and their dislike of perching in trees. They fly quickly or walk and run along the ground and over rocks.

The Tree Pipit, A. trivialis, and the Olive-backed Pipit A. hodgsoni distinguishes themselves by using trees to sing from and the Forest Wagtail (Dendronanthus indicus) is quite unique in that it prefers to live in forested areas where it forages along the ground, but nests in a tree.

Otherwise the members of this family nest on the ground in a simple cup nest and the number of eggs laid seems to depend on latitude, with more northerly breeders laying up to 7 eggs. A second brood is quite common.

Taxonomically the family is at times quite confusing, with experts arguing about subspecies and their validity as species.

This is particularly bad in the:

The number of world species is therefore somewhere between 65 and 75.

For a list of species and their breeding distributions see the below Checklist of Motacillidae.

Well, perhaps now you’d like to learn a little about the Mousebirds.