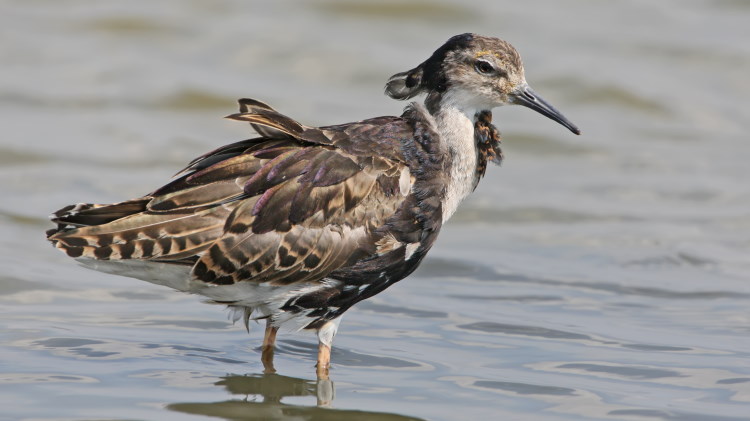 Bird feathers get damaged and need replacing regularly – via moulting.

Normally this happens once a year, though in some species a second moult occurs.

This second moult is known as an eclipse moult and birdwatchers often refer to a bird as being in ‘eclipse’.

Most birds do not shed all their feathers at once. This would be dangerous.

The exception to this rule being some female hornbills,which spend time each year walled up inside a hole in a tree sitting on eggs. She is brought food by her mate and uses this opportunity to shed all her feathers and grow a complete new set.

They cannot afford to lose many feathers at one time because of the cold. They stand around in large groups, with new feathers growing all over their bodies. These new feathers push out the old ones, which the bird then removes by preening. During the 2-3 weeks the moult takes, birds stand on the sea-shore unable to swim and therefore feed while the new feathers gradually replace the old ones.

Most birds moult by replacing a few feathers at a time.

Moulting is normally symmetrical. Thus a bird may lose primaries and one or two separate secondaries on each wing (when these are replaced they will lose the next ones along). This way a bird can still function.

The feathers grow quickly and it requires a lot of energy to build them. Even so, moulting can take a long time and some parrots take up to 9 months to complete a moult. Some larger birds of prey are an exception to the ‘moulting every year’ rule and only moult their flight feathers every 2 years.

Many water birds moult all their flight feathers in one go.

This means that for a part of the year they cannot fly. Often they congregate in huge flocks during this time. This is because the larger the group, the less the chances of being eaten by a predator – there is protection in numbers.

A good example of this is when nearly all the Shelducks (Tadorna tadorna) in north west Europe – about 100,000 birds – congregate in the Grasser Knechtsand area of the Baddenzee in Germany to moult.

Moulting has a cost. In terms of resources, a bird’s metabolic energy usage may be as much as 30 percent higher during moult.