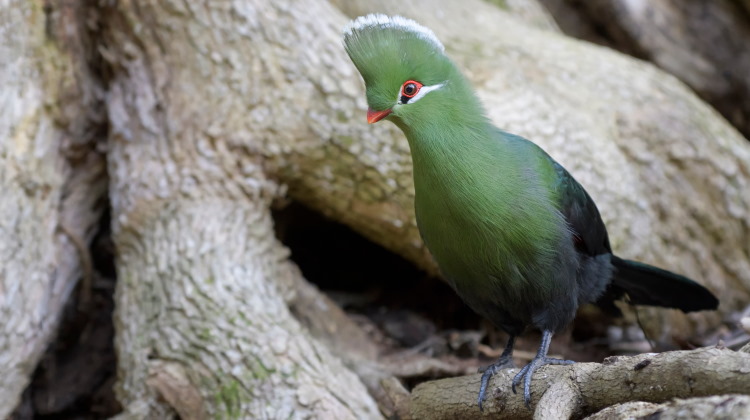 They are found only in Africa, south of the Sahara where they can be found in a variety of habitats. Turacos are popular aviary birds and you can see them in many zoos and bird gardens.

Most species are only half this size however.

Their feet are described as semi-zygodactylous because the fourth toe points out sideways and can be pointed forwards or backwards, depending on the bird’s needs.

Turacos are adequate, though not expert, flyers. Though they are very agile on their feet and happily run around in the vegetation. Turacos are noisy and sociable birds, normally found in small flocks. They are primarily herbivores, feeding on fruits and seeds, though they will take insects and other invertebrates when the opportunity is offered.

In some parts of Africa, forest Turacos are the most colourful birds around – but are often not easy to see. They rarely come to the ground, spending their lives high in the trees. Those species known as Plantain Eaters and Go-away birds are much more easily seen as they inhabit more open country.

The Go-away bird is so named because of its habit of sitting atop a bush and calling loudly “Go-awa-a” whenever a hunter comes near.

Plantain Eaters, however, do not seem to spend much time eating plantains.

Nests are made of twigs and placed low in the vegetation. The eggs are of various colours and normally 2 or 3 are laid and incubated by the female only for 18 days. The young are born altricial, meaning that they are naked and helpless. They are fed on regurgitated fruit for about 4 weeks, by which time they are able to fly and forage for themselves.

Like the Hoatzin, the young have a wing claw to help them scramble around the treetops.

Courtship generally involves fluttering the wings to display the bright colours, raising and lowering the crest and flicking the tail – followed by the male bringing a food offering to the female.