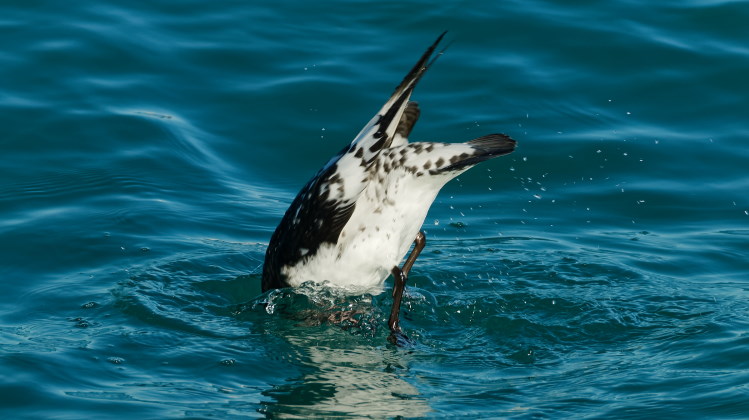 The Diving Petrels are small, 6-9 ins or 15-23 cms long with an average wingspan of 30cm or 12 ins, Southern Hemisphere sea birds.

They can be distinguished from the other Procellariiformes in that their nostrils open upwards rather than forwards.

Unlike other Petrels none of them seem to be migratory.

With only four species they are by far the smallest family in the Procellariiformes. Two of the four species are still fairly common, while one species – the Peruvian Diving Petrel Pelecanoides garnotti – is sufficiently rare to be classified as Endangered.

Ecologically they play a similar role in the Southern Hemisphere to the Auks in the Northern Hemisphere. The pressure of evolution to a similar niche have resulted in a similar design and they all have short pointed wings, short legs and very short tails.

They also tend to be black or dark above and pale or whitish below. They have short stout bills and their legs are set far back on their body.

As their name implies, and unlike the other Petrels which rarely dive more than 0.5 ms or 18 inches below the surface, they are adept divers. They are as at home beneath the water as they are above it. Except when breeding, they spend their whole lives at sea. Though they are inshore birds tending to remain reasonably close to the shoreline.

They nest on Antarctic Islands, as well as on islands south of Eastern Australia, New Zealand and South America.

Like the other Petrels they nest in burrows, but also in holes in rocks and amongst tufts of grass. Also like other Petrels they tend to come to land only after dark. They lay a single large white egg which is incubated by both sexes for about a day at a time for about 8 weeks. Egg laying occurs sometime between July and December.

Unlike other Petrels however, the chick is also incubated for the first two weeks of its life. After about 8 weeks the chick fledges and starts to look after itself. The adults are unusual for Procellariiformes, in that after the breeding season they moult all their flight feathers and are therefore flightless until they have regrown.

Diving Petrels mature more quickly than other Petrels reaching sexual maturity in only 2 or 3 years.