Home
birds
Procellariiformes: The Order Of The Petrels
Help us spread the word...
TwitterFacebookPinterest

Petrels and Albatrosses, with their wandering life cycles and ability to be seen thousands of miles from any land, have fascinated mankind for hundreds of years.

Albatrosses – as symbols of good luck – feature in one of the greatest narrative poems of the English language, The Rhyme of the Ancient Mariner.

Even today, Albatrosses remain creatures of wonder and awe.

While their small cousins, the Prions, instil fierce dedication in a small band of birdwatchers. 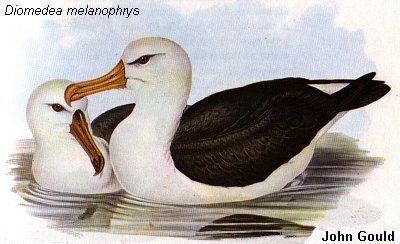 The Procellariiformes is a small order of birds comprising 4 families, 23 genera and 92 species (give or take a couple).

They are all marine birds which spend the majority of their lives at sea, only coming to land in order to breed.

The common name for the entire group is ‘tubenoses’.

This is a reference to their external tubular nostrils which are often very evident on the upper mandible.

Petrels are most closely related to Penguins.

They have slightly lower body temperatures than most other birds – 37-39 degrees C rather than 40-41 degrees C.

All the Procellariiformes are smelly (odiferous) birds, with their particular musty odour remaining strong in museum specimens for years.

But the Giant Petrel is so smelly it is/was often known as a ‘Stinker’ or ‘Nelly’ to sailors. Another characteristic that the whole group share is that they all lay only a single egg per breeding season.

Most Petrels are excellent flyers, among the very best in the bird world. The Wandering Albatross can fly for hours without flapping its wings at all. The exceptions are the Diving Petrels (Pelecanoididae) which have much shorter wings and are more like Auks in the way they fly.

Most Petrels are birds of the southern oceans, though some prefer the northern hemisphere.

They are rarest in tropical waters.

They have the widest distribution of any order of birds, with species nesting from 250 km (155 miles) inland in the Antarctic to as far north as land occurs. Most species however nest on remote islands or inhospitable sea cliffs.

Southern giant petrel running on the sea to get airborne

Of the 92 extant (still living) species, 11 Petrels are considered to be Critically Endangered, a further 6 are Endangered and 15 more are Vulnerable.

At the other extreme is Wilson’s Storm Petrel, which some ornithologists estimate is one of the most numerous birds in the world. Some scientists think that some species of the smaller Prions and diving Petrels may be even more numerous.

Procellariformes are an ancient order of birds.

The fossil record goes back at least 36 million years. These earliest known fossils are of birds very similar to present day species, suggesting that the Petrels as a group were already well separated from the main line of avian development.

This and mitochondrial studies suggest that Petrels of one sort or another may have been flying across antediluvian seas as much as 50-55 million years ago.

John Wareham lists 47 species of fossil Procellariiforms in his book “The Behaviour, Population Biology, and Physiology of Petrels”, including 20 species in the genus Puffinus

As well as a large range in distribution and population biology, the Procellariiformes have one of, if not the greatest range in size of any order of birds.

This means that the largest Procellariiform is 8.6 times as long, 11.25 times as large in the wingspan and 274 times as heavy as the smallest.

All members of the Procellariiformes feed at sea.

What they feed on varies depending on species. But generally, if it can be found near or on the surface of the sea and it can be swallowed, it will be eaten.

A number of the smaller species feed on crustaceans, while larger ones tend to take squid and fish. 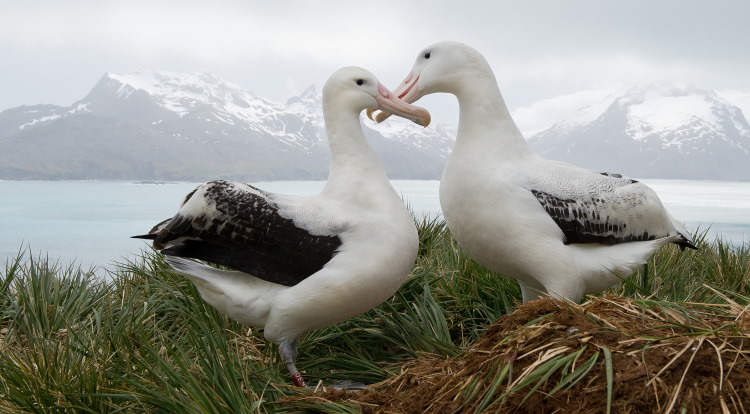 Many species are scavengers eating whatever can be found on the surface. Many species are also found in association with Whales, Dolphins and schools of larger fish. In these circumstances they are either feeding on the same items as the animals involved, or on the scraps and refuse left from the ‘mammals’ or ‘fishes’ feeding.

Associations between Petrels and fish are sufficiently well known for Irish Fishermen to call the Manx Shearwater ‘Mackerel Cock’, recognising it as an indicator of fish shoals.

Associations with marine mammals are also well known and Blue Petrels and Prions are known as ‘Whale Birds’. Past whalers knew it was no use looking for whales if there were no birds present.

Albatrosses are particularly prone to collecting detritus and as they regurgitate food for their young to eat during the breeding season this detritus gets regurgitated as well.

Nests of Wandering and other Albatrosses can be home to numerous examples of such splendid items of our disposable culture as plastic bottle tops, cigarette lighters and pen caps.

Many of the Procellariiformes are migratory though unlike swallows and hummingbirds their migrations are never complete.

This means some birds will be at or near the breeding sites all year round.

Migrations can be latitudinal (North-South) or longitudinal (East-West). Puffinus apisthomeles is a latitudinally migrating species with a short migration along the western coast of the United States. It does not cross the equator. Manx Shearwaters on the other hand, migrate huge distances from one side of the equator to the other.

Many Procellariiformes have been used by man as a source of food in the past.

Their bones are found in archaeological remains in many places around the world, however today only two species of Shearwaters as birds and one species of Petrel as eggs are eaten regularly.

Stomach oil was an important commodity in a number of communities, being used in lamps as well as in medicine.

At different times in the past, seamen have regarded the Albatross as both a sign of good fortune – which should not be killed – and later as a sign of bad luck, which was only fit for killing and eating.

A dead loss was the albatross
The ‘ancient Mariner’ slew
The modern Tar, acuter far,
Makes him into stew.

Modern interactions between mankind and Procellariiformes involve the problems of birds, particularly Albatrosses nesting around airports – where they are a danger to the aircraft and the people in them.

On Midway Atoll for instance, there were 300-400 collisions per year between aircraft and birds between 1958 and 1964 – when it was used by nuclear armed air patrols.

More recently a number of Laysan Albatross (Diomedea immutabilis) have become a nuisance by trying to nest at Pacific Missile Range on Kauai Hawaii and at Dillinghan Airfield on Oahu.

Far more serious are the interactions between Procellariiformes and fishermen.

Until recently, drift-net fisheries were responsible for the death of huge numbers of seabirds – as many as 500,000 in 1990 alone.

It is a conservation success story that public and scientific outcry at this horrendous slaughter has caused an end to drift-net fishing. However seabirds are not yet safe, both set net fishing and squid trawlers cause numerous seabird deaths each year.

Worse still is the continuing expansion of longline fisheries.

These have been found to be responsible for declines in the numbers of Wandering Albatross Diomedea exulans and others on South Georgia, Macquarie Island and the French Indian Ocean islands.

It was calculated that around 44,000 Albatrosses from 5 species died in one year, as a result of longline fishing around South Georgia Islands.

Scientific research is developing methods to reduce the mortality…

In New Zealand waters at least, Japanese fishermen are required to streamer lines (as bird scarers) to their lines or to set their lines at night.

Other dangers to breeding Procellariiformes have been the rats. They follow man around in his ships and then escape onto pacific islands, when sailors go ashore to hunt for food.

These – and the cats later introduced to control them – significantly reduce breeding success, as has been shown after their removal from a number of New Zealand islands (a time consuming and expensive operation).

Pterodromas macroptera on Marion Island had a breeding success rate of between 0 to 20 percent from 1979 to 1984. In 1990 after the removal of several thousand cats breeding success rose rapidly to 60 percent.

The 92 species of Procellariiformes are easily divided into four family level groups: