The Shearwaters (The Procellariidae) are the largest and most diverse group of Petrels.

The 66 or so species (the taxonomy of both Prions and Gadfly petrels is uncertain) can be divided into four subgroups:

The name ‘Shearwater’ arises from the habit of some species of flying and gliding close to the surface of the sea.

One of the most widespread and best known Shearwaters is the Manx Shearwater (Puffinus puffinus). Which can be found offshore around the UK and as far north as Iceland, in the Mediterranean, around North America and around New Zealand.

Manx Shearwaters will fly long distances between their nesting sites and their feeding grounds. Birds nesting in Wales have been recorded feeding over 600 miles south on Sardines in the Bay of Biscay.

Another famous Petrel is the Black Petrel Procellaria parkinsoni, it and a few other hole nesting Petrels in New Zealand will sometimes share their burrows with a Tuatara – a reptile of ancient lineage found only in New Zealand. 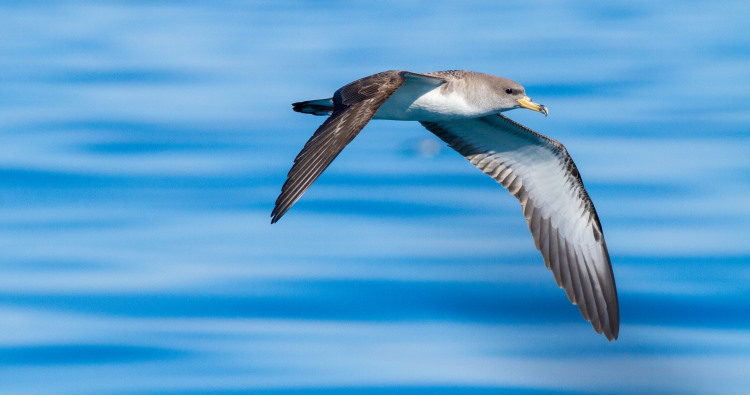 Many Shearwaters undergo impressive migrations, often flying to the opposite side of the world, from the UK to Brazil and back in the case of the Manx Shearwater. Or from South Australia and Tasmania to the North Pacific and back (a round trip of some 20 000 miles or 32 000 km), in the case of the Short-tailed Shearwater, Puffinus tenuirostris.

Like all petrels, they are marine birds which spend their lives on the open ocean except when breeding. They breed in colonies mostly on remote islands and sea cliffs though several species nest inland. They are all communal feeders, aggregating wherever food is plentiful.

Most are nocturnal when on land during the breeding season, staying at sea until after sunset.

Fulmars are cold water lovers and all seven species are fairly solid birds, with strong bills.

They are seldom seen in tropical or even subtropical waters. Six of the 7 species are limited to the southern hemisphere. The northern species, Fulmarus glacialis has shown considerable increase in its breeding range around the UK in the last 50 years.

Fulmars can be distinguished easily from gulls because their wings stick straight out to the side and because of the prominent tubular nostrils on top of their bills. The wings of gulls – with whom they are often found – bend backwards at the wrist, the joint between the carpometacarpus and the radius/ulna. 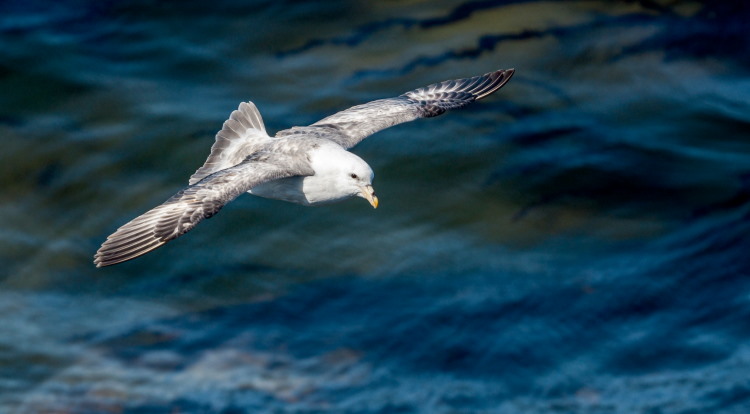 The southern equivalent of the northern Fulmar is the southern Fulmar, F. fulmarus. Shearwaters are believed to have separated off from the rest of the petrels during the late Oligocene.

Shearwaters are normally seen on the water or above it, but they have been recorded diving to 90 cm depth.

Like other petrels, Shearwaters collect oil in their stomachs which they derive from the crustaceans in their food. This oil can be used to feed the young. For most species analysed, these oils contain wax esters, triglycerides, fatty acids and vitamins A and D.

Shearwaters arrive at the breeding grounds long before they actually start breeding or even courting – Fulmars sometimes arriving before Christmas in the UK for their spring breeding. Courtship in Fulmars involves facing each other and calling. While Shearwaters indulge in complex series of flights over and around the nesting colony, calling in their rather harsh and raucous voices.

During this exchange stomach oil may also be exchanged.

Though all Shearwaters can eject stomach oil, Fulmars have developed this as a defence mechanism and can spit a stream of foul smelling oil 60-90 cm (2-3 ft) quite accurately.

The burrowing Shearwaters and Prions are nocturnal at the breeding site, waiting until dark before leaving the relative safety of the sea. Their courtship involves circle flights calling above the burrow entrance.

With tens of thousands of birds nesting at one site, the noise at a Shearwater colony can be quite freaky at night. This noise combined with thousands of birds flying around in the dark, bumping into things, make the whole site very chaotic from a human point of view.

After courtship, the Shearwater pair roost together.

For true Fulmarus sp. nesting occurs mostly on ledges on cliff faces, but in areas free from predation they may nest on land – unlike the rest of the Shearwaters which all nest in burrows.

The nest of itself is non-existent or rudimentary, a few pebbles. Only one egg is laid and if this is lost, the couple do not re-lay until the following year. Both sexes incubate the egg often for 1 or 2 days at a time for those species which feed out at sea.

Incubation takes about 42 to 56 days, depending on the size of the species. The newly hatched bird is not fully homeothermic (i.e. it cannot maintain its own body temperature), so it is brooded constantly by one parent or another for the first week of its life. 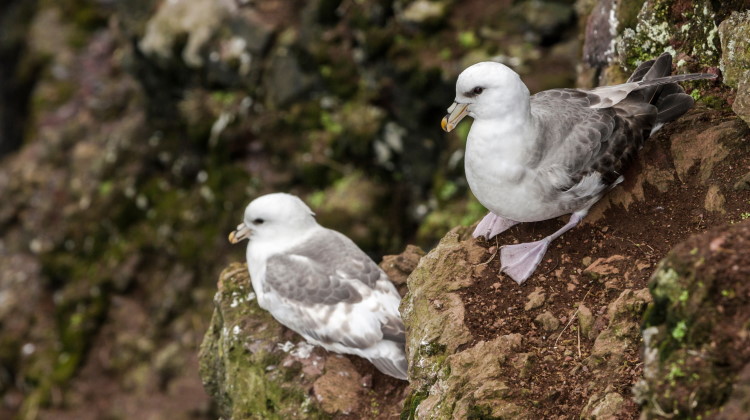 During this time it is fed regularly on regurgitated stomach oil. Later, as the bird grows this includes partly digested food. After the first week the bird is attended by its parents only at feeding time. Fledging takes about 84 to 140 days in most species, and towards the end of this period the young bird is abandoned.

Its weight is often now greater than that of its parents and it starves for 1-2 weeks before it finally takes flight. During this time it loses weight, strengthens its feathers, and also strengthens its wing muscles with flapping exercises.

Shearwaters take several years to reach sexual maturity, 7-8 in Fulmarus glacialis. During this time they live mostly at sea, though they will return to nesting colonies before they reach maturity and even practice courting.

The greatest mortality of Shearwaters occurs while they are in the nest and in the first month or so after fledging. From here on in they experience low mortality. Shearwaters are long lived birds having a potential life span of at least 15 years in most species.

Some Shearwaters are eaten by man, or used commercially. Thus Islanders in the Tristan da Cunha Islands take about 15,000 to 20,000 eggs from the nesting colonies of The Great Shearwater (Puffinus gravis) every year. 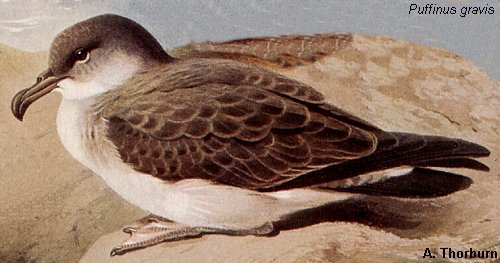 The population here is about 4 million birds however so this crop is sustainable. In Australia both adult and chicks of the Short-tailed Shearwater (Puffinus tenuirostris) or Mutton-birds have been taken for food, their down and the oil in their stomachs for many years.

The Gadfly Shearwaters are a smallish birds comprising two genera. There is one species in the genus Bulweria Bulwer’s Petrel (B. bulwerii), and about 23 in the genus Pterodroma.

Gadfly Shearwaters are not often seen by man and a number of species are probably very rare because we know practically nothing about them. They are rarely if ever seen and some may even be extinct already. 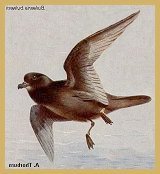 PinThe most famous is perhaps the Cahow or Bermuda Petrel (Pterodroma cahow). This species was practically made extinct by over hunting in the early 17th century – after this it was legally protected but to little avail. During the 18th century the bird was thought to be extinct, but in the early part of the 19th century some new specimens were obtained and in 1951 it was confirmed as breeding on Cooper’s Island Bermuda.

In 1966 there were only 24 breeding pairs, but the population was slowly increasing.

It is now off the Critically Endangered species list, but still on the Endangered list with 49 nesting pairs in 1995 and 56 in 1999, for more info see The Cahow Conservation Reports from the Bermuda Audubon Society.

Other species of Gadfly Petrel, about which little or nothing is know, include the Black-capped Petrel (Pterodroma hasitata) – which was quite common until Western Europeans colonised the Caribbean. It was then rarely seen for 200 hundred years, until a breeding colony of 2000 pairs was discovered on a island in Haiti in 1963.

The Prions are a small groups of Petrels which were once known as whale birds.

This is because they feed on the same marine plankton that baleen whales feed on – and were thus likely to be good indicators of where the whales may be.

There are six species of whale bird with several subspecies (which may one day be raised to full species). Four of these species are hole nesters and two nest among boulders. 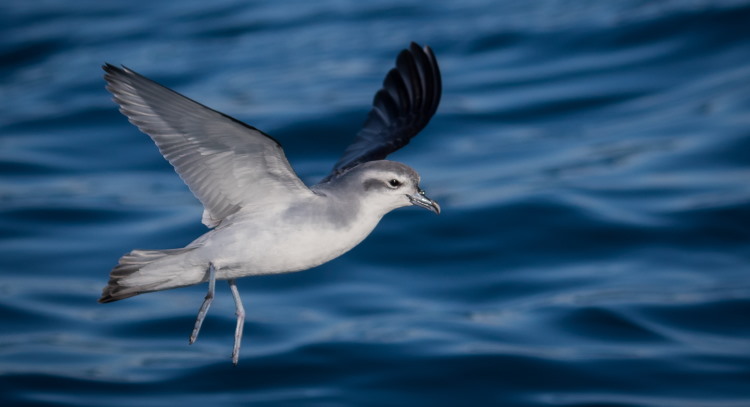 They are all very similar in size and colouration with distinctive W like white markings on their wings. The hole nesters have wider bills and special comb-like growths on the palate to help them strain zooplankton out of the water

There are in all 9 species of Petrel from the family Procellariidae listed as Critically Endangered and 4 listed as Endangered.