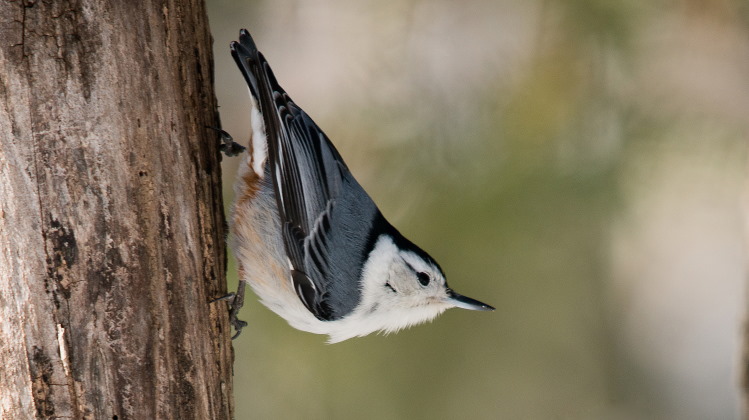 And in most cases a distinctive habit of walking up and down trees.

They occur all across the northern hemisphere with few gaps, outside of Tibet and Central Russia . All but 3 members of the Sittidae are forest birds, many specialising in coniferous forests.

The exceptions are the two species of Rock Nuthatches and the Wallcreeper, the only member of the family that is not part of the genus Sitta.

Scientists think it is most likely that the genus Sitta originated in SE Asia at least 20 million years ago. There is only one fossil Nuthatch (Sitta senorgalliensis) from the Miocene.

The greatest density of Nuthatch species is still in Asia, with 18 species found there, compared with 4 species in N America and 6 in Europe.

All Nuthatches are primarily insectivorous, though some species will feed on seeds.

These species including the Eurasian Nuthatch have the interesting habit of jamming larger seeds and nuts into crevices in the bark of a tree and then picking pieces off. A number of species also cache a store of seeds and also insects on occasion.

The smallest species are the Red-breasted and Dwarf Nuthatches which weigh between 10g and 11g.

The largest species is the Giant Nuthatch, which has a body length nearly twice that of the previous two – and therefore probably weighs about 35g-40g (though no specimens have been weighed).

There is little sexual dimorphism, with males being slightly larger in some species. All those species where information is available have a complete moult after breeding.

A number of Nuthatches have limited distributions and nearly a quarter of them are listed as threatened, though none are endangered. Habitat destruction is the main danger for the future.

Nuthatches nest in hollows in live or dead trees (except the two rock Nuthatches) and those whose nesting biology is known, can be divided up into two groups:

Those species – such as the Eurasian Nuthatch – which seal up the entrance to the nest so that the female is locked in with her eggs and young, are almost unique in the world of birds. Only the Hornbills (Buceratiformes) share this habit.

Like the taxonomically unrelated Hornbills, the female and the developing young are fed by the male while within the nest.

Several species also smear the nest entrance with substances believed to act as a deterrent to pests and parasites. Red-breasted Nuthatches use resin, White-breasted and White-cheeked Nuthatches use crushed insects.

The entrance holes are usually plastered with mud and/or dung (see mud birds nests). The two Rock Nuthatches build extremely solid mud nests on the sides of cliffs, usually under an overhang. These hemispherical creations are often quite large and require a lot of work on the bird’s behalf.

Nuthatches are socially monogamous, though two of the species (Pygmy and Brown-headed Nuthatches) can have one or two extra male helpers at the nest.

Normally, between 4-8 eggs are laid and the female does all the incubation – but she is fed by the male. Incubation takes 13-18 days in the Eurasian Nuthatch, whilst fledging takes 18-25 days. Nuthatches usually breed at one year of age, have only one brood per year and seldom live for more than 4-5 years in the wild. Only 15% of all eggs laid live long enough to reproduce (Eurasian Nuthatch).

Most Nuthatches maintain territories all year round, as opposed to only during the breeding season as is the case for many small birds.

The only species in which territories have been studied is the Eurasian Nuthatch – which is a widespread species found from the UK to Japan. Its territories are normally 2-3 hectares (4.5-6.5 acres) in size with an average population density of 3-5 pairs per 10 hectares (22 acres).

Pygmy Nuthatches have the unusual habit of roosting communally inside a hollow tree in winter, which helps them to stay warm during the cold nights. Normally the groups are relatively small – 10-20 birds – but as many as 167 birds have been counted in one roost.