Tinamous are small, partridge like birds which live only in South America.

They are most closely related to the Ratites and in some classifications are included in the same order.

Some people think that the earliest true birds may well have been similar to Tinamous.

There are currently 47 species of tinamous which range in size from 20-53 cm (8-21 in) in length. They occupy a range of habitats – forest, plains and montane from Mexico south through most of S. America.

Unlike the ratites, to which they are most closely related, tinamous have a breastbone and can fly. Their flight however is not strong, and they are adept runners. Their main response to danger is to remain perfectly still allowing their cryptic colouration to protect them.

Tinamous have either 3 or 4 toes and most, except the genus Tinamus, roost on the ground.

Most species of Tinamous are surviving fairly well at present, though they are hunted for their meat which apparently tastes like strongly flavoured chicken.

Some species appear to have a breeding season, while other seem to breed all year round.

Females are generally larger than males. Most species are polygamous to various degrees. Male Boneparte’s Tinamou, Northocercus bonapartii, gather a harem of three females which each lay 3 eggs in the nest. In other species, females may lay in more than one nest.

The known exception is the Ornate Tinamou, Northoprocta ornata, where only a single male and female pair off. In all known cases, the male does all the incubation which takes 18-21 days. The young are born precocial and can fly a few weeks after hatching, when they are more likely to fly than as adults.

The eggs of most species are brightly coloured. 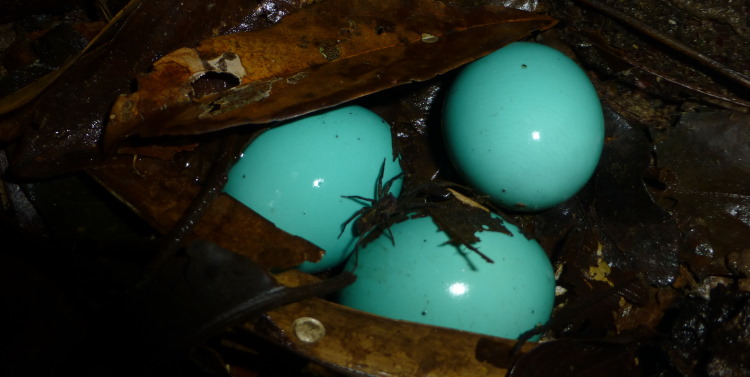 Many species, particularly those inhabiting forested areas are solitary outside of the breeding season. In more open country there is a tendency to gather into flocks. Up to 100 adult Martineta Tinamous, Eudromia elegans, have been recorded in a single flock.

Most tinamous have been recorded as being primarily herbivores, though a high proportion of insects is recorded in the diet of members of the genus Norhtoprocta, especially the young.

Tinamous have been introduced to various countries, presumably because of their value as game animals, including the UK.

However, they have not established themselves successfully anywhere outside their normal range except in Easter Island.

Several species are listed as threatened: