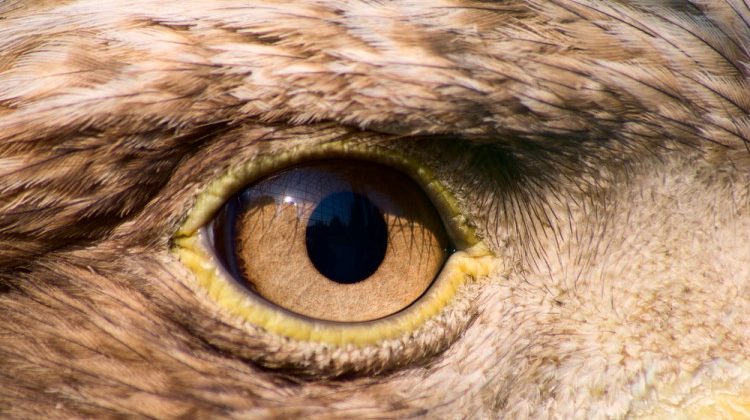 The Avian Eye and Vision

A bird’s eye is very similar in its basic structure to a human eye.

Though with certain modifications and differences.

The eyes make up a much larger percentage of the weight of the head in birds, than in man – I.e., 15% for a common Starling, but only 1% for man.

This is partly because a bird’s eyes are larger relative to its skull than a human’s… and partly because the skull is lighter, I.e. no heavy jaw bone and teeth.

Bird eyes are very tightly fitted into their skulls and capable of very little movement. Therefore birds can often be seen moving their heads in order to change their visual relationship to something.

In most birds, the eyes are placed much nearer the sides of the head than in humans. This gives the bird a greater overall field of view, but greatly reduces its binocular vision (the area in which both eyes can see an object).

In many raptors and owls, the situation is different.

In these birds – as in many insectivorous birds – binocular vision is a critical aspect of the bird’s vision. It’s important in making judgements of distance. And is necessary to such an extent that these birds have evolved their eyes more towards the front of their heads.

This is most evident in owls, where the total field of view is reduced to about 110 degrees – with a binocular vision of 70 degrees.

This is why owls turn their heads to watch you walk past. An owl can turn its head through over 200 degrees but cannot move its eyes in its head at all.

Parts of The Bird Eye

One upper and one lower eyelid – of which the lower is more movable. Plus a nictitating membrane.

This nictitating membrane is between the other two eyelids and the cornea and has its own lubricating duct, equivalent to our tear duct. It is used in cleaning and protecting the eye.

This is the protective covering on the outer surface of the eye.

This is the space immediately behind the cornea and leading to the iris and the lens. It is filled with a fluid called the aqueous humor.

This is a muscularly operated diaphragm which controls the amount of light entering the eye.

It is coloured and it is this that gives the eye its colour. At the centre of the iris is the variable hole through which the light actually passes on its way into the eye, this is called the pupil.

This is a transparent convex or ‘lens’ shaped body with a harder outer layer and a softer inner layer.

This is the bulk of the eye and is the space behind the lens and between the lens and the retina. It is filled with a clear jelly-like substance called the vitreous humor.

This is the inner light receptive part of the eye.

It is covered in special ‘photoreceptive’ cells called rods and cones.

Towards the centre of the retina is an area called the fovea centralis which has a greater density of ‘receptors’ or rods and cones. This is the area of greatest visual acuity, i.e. sharpest , clearest detection of objects.

The number of receptors per square millimetre determines the degree of visual acuity an animal has. The more receptors, the higher its ability to distinguish individual objects at a distance.

In some birds, such as hawks, kingfishers and swallows –  the eye has 2 fovea. One for sideways viewing and one for forward viewing.

In many raptors, the fovea centralis has far more rods and cones than in humans – and it is this which allows these birds their spectacular long distance vision.

Buzzards for instance have distance vision 6 to 8 times better than ours. Part of this is a result of the lens shaped central fovea, which acts something like a times two magnifying lens.

This is a poorly understood body which inserts into the eye from the back.

This is a bundle of nerve fibres which carry messages from the eye to the relevant parts of the brain and vice-versa. Like us, birds have a small blind spot where the optic nerve meets the retina.

A tough collagen fibre layer which surrounds the whole inner part of the eye (that part not covered by the cornea), it supports and protects the eye as a whole.

The bird’s eye has two sorts of light receptors.

They are called ‘rods’ and ‘cones’. Rods are better for night vision because they are sensitive to small quantities of light. However – as it is the cones that allow us to distinguish between different colours of light – they are more important to colour orientated animals such as birds.

Also there can be as many as 150 rods connected to a single nerve cell. This increases its sensitivity but reduces its definition, i.e. things look blurry.

Cones can be as few as one or two per nerve cell. This works the opposite way, making them less sensitive but more accurate for detail. Which is good during the daylight.

Cones come in different flavours depending on which pigment they contain, different pigments detect different colours. Birds have 5 pigments (we only have 3). This gives them greater sensitivity to certain colours, allowing them to see more different shades of some colours, such as red, than we can.

In birds the cones also have special oil droplets on them, which help filter the light, making the cones more sensitive to smaller ranges of colour. As they have five different sorts of oil filters, the eyes of birds can often see a far more subtle world than we can.

Sea birds such as the Procellariformes use red oil filters to cut out the blue light scattered up from the sea. This makes it easier for them to discern small objects floating on or near the surface.

Lastly, note that a 2019 study tells us that birds also have excellent UV vision.

Well we hope the mystery of bird eyes and a bird’s vision has now been solved for you!