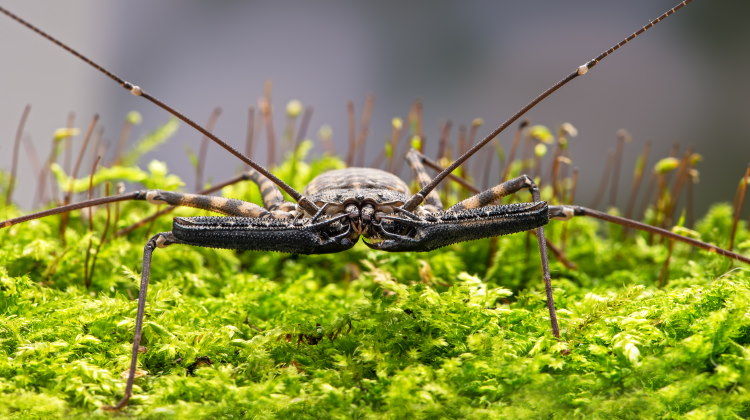 The Amblypygi are an order of Arachnids that are rapidly becoming more popular with amateur enthusiasts. They are commonly called Whip Spiders or Tailless Whip Scorpions – and are often erroneously considered to be extremely poisonous and dangerous.

In fact, though they may seem scary at first view, they are rather amazing animals which are not poisonous at all; nor are they dangerous to mankind.

Amblypygids are mostly found in the warm and humid environment of the rainforest. All Amblypygids are carnivorous, feeding on live insects such as crickets. The largest species will also tackle small vertebrates, if given the opportunity. The Caribbean species Phrynus longipes reacts readily to the buzzing of the flies and happily attack and eat large flies.

Courtship in Tailless Whip Scorpions is a complicated and intricate affair, much like a ritual dance – involving much touching and stroking of the female by the male, using his antenniform forelegs.

Sperm transfer is indirect, as in scorpions. The male deposits a spermatophore on the substrate and then lures the female towards it; she eventually positions her body so that the sperm can enter her genital tract, where she will store them until she is ovipositing.

This courtship and mating always occurs in darkness, so you will need a red-light if you wish to observe it. The exception to the rule here is Charinus acosta from Cuba; which is a parthenogenetic species, with no males known to science (so obviously there is no courtship).

An indefinite period of time after mating, weeks or even months later, the female Tailless Whip Scorpion will lay her eggs.

The eggs are enclosed in an egg sac that is carried on the underside of the female’s opisthosoma. Though liquid when extruded, it quickly solidifies and becomes a leathery case she carries around with her.

Oviposition occurs at night and females will abort egg-laying if they are disturbed, so be careful if you wish to observe the process. The Amblypygi eggs take about 3 to 3.5 months to hatch. Females do not eat until their young have left her.

These first hatchlings are called praenymphs; they are white and still embryonic and they can hardly move. They cling to their mother and after 1 to 2 weeks they moult again into a protonymph. The female normally remains motionless during this time.

You may also like to know that a Tailless Whip Scorpion made a curious cameo in the 2005 film adaptation of Harry Potter And The Goblet Of Fire, where Alastor Moody used one to demonstrate the ‘unforgiveable curses’.