Home
chelicerata
Chelicerata: Welcome To The Delightful World Of The Chelicirates
Help us spread the word...
TwitterFacebookPinterest

The Chelicerata, which I have called a subphylum here for convenience (but which is just as well called a phylum in some texts) is an extremely ancient group of arthropods, including the extinct Eurypterida.

The first ancestral chelicerates probably evolved about 600 million years ago. They are now distinguished from the other arthropod groups by the possession of (at least) six pairs of appendages.

These normally include four pairs of walking legs, a pair of chelicerae and a pair of pedipalps. They have no mandibles, no antennae and the body is divided into two (not three) sections, as in the Uniramia. They are however normally bilaterally symetrical, have a through gut, have uniramous appendages, a non-calcareous exoskeleton and are gonochoristic.

No chelicerates possess jaws for biting and chewing, but suck up their food in liquid or semi-liquid form. However, this food may have been seriously torn up by the chelicerae before ingestion. Most species go in for external digestion to some extent.

Meaning they secrete digestive juices onto the food item, as it is held close to the mouth; or inject digestive juices into the prey’s body – and suck up the half digested soup that results. 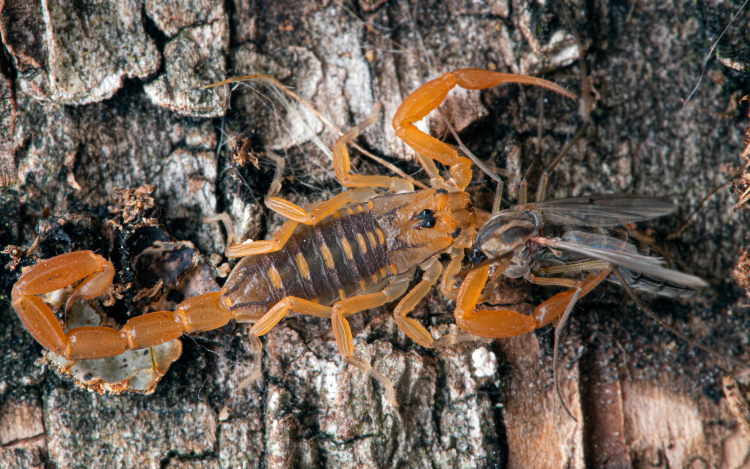 The inclusion of the class Pycnogonida in the Chelicerata is generally accepted, but not scientifically proven. The fossil record for pycnogonids is very scant and they differ in many ways from the other chelicerates.

The Chelicerata contain more about 80,000 species known to science, most of which are Arachnids divided almost evenly between the spiders and the mites.

Use the links below to explore the Chelicerata section of our site!