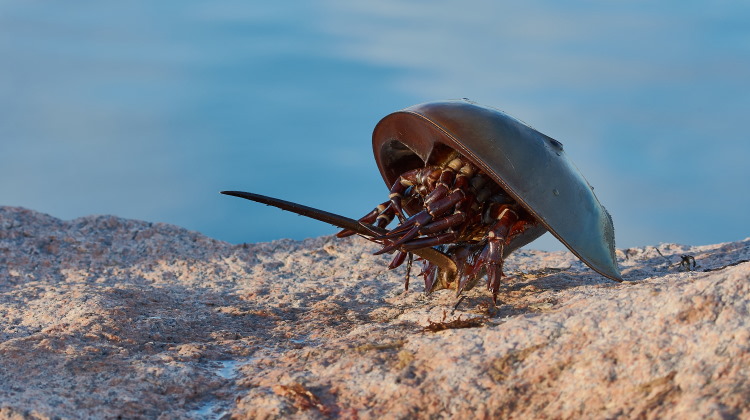 The Class Merostomata (Horseshoe Crabs) are an ancient class of animals who evolved in the early Cambrian (570 million years ago) and were a dominant life-form in the seas and oceans of the world until the Permian 310 MYA.

Now, they are a very small group consisting of only 4 species in 3 genera and one order (or subclass) Xiphosura.

In the past, the class contained a second order (or subclass) known as Eurypterida. These were large aquatic animals, that looked more like scorpions than their immediate relatives the horseshoe crabs. They have been called Sea Scorpions, though they often lived in freshwater or brackish habitats.

Modern Horseshoe crab can occur in large numbers, where they still exist. However, all species are considered vulnerable by the IUCN – because their populations have often been exploited for many years as animal feed and fertiliser.

One species, Limulus polyphemus lives off the coast of eastern America, the other three species live in Southeast Asia. Horseshoe crabs are generally considered to be entirely marine, though Carcinoscorpius rotundicauda has been recorded entering rivers in India and was once caught 145 km (96 miles) upstream.

They are called Horseshoe crabs because the dorsal plate which covers their body bears some resemblance to a horseshoe.

They are fairly primitive animals, being very similar in appearance to their ancestors of more than 200 million years ago. Horseshoe crabs live mostly partly buried in the mud of the sea floor, where they hunt for small animals, worms, crustaceans and even fish – which they eat.

As well as pushing through the mud, they can walk on their legs and even swim. Young and immature animals tend to swim more frequently and often do so with their bodies upside down; in this way the dorsal plate helps supply lift.

A distinctive part of a Horseshoe crab anatomy is the long, stiff caudal spine. While this may look dangerous, it is not a weapon and serves only to help the animal in forward movement; and to right it, if it gets turned on its back (an important function as none of its limbs reach beyond the edge of the carapace).

The whole body of the animal is covered, and thus protected by, two dorsal plates called a carapace. The carapace is said to bear two compound and two simple eyes – however the compound eyes are really just a group of simple eyes compressed together.

The abdomen (or opisthosoma) consists of 9 fused segments and is protected by the abdominal dorsal plate, which hinges with the cephalothoracic plate. The legs consist of coxa, trochanter, femur, tibia and two tarsal segments. The first pair (of 6) of abdominal legs have the openings of the reproductive organs in them.

The last five of the abdominal legs have gills on them. These gills are called ‘book gills’ because each one consists of a series 150 to 200 flat plates, laid one over the other like the pages of a book. These are the animal’s organs of gaseous exchange.

Horseshoe crabs also have a well developed circulatory system. This is comprised of a heart and arteries that carry the blood around the body and then into two veins, which pass through the gills (where CO2 and O2 are exchanged before the reoxygenated blood returns to the heart).

The Merostomata nervous system consists of a circum-oesophagal brain with a vetral nerve cord; this gives rise to five sets of ganglia from which nerves spread out to the body. There is also a pair of longitudinal nerve cords; it is these that control the heart.

In the breeding season (spring for Limulus polyphemus), Horseshoe crab migrate to certain shallow coastal waters where they collect in large numbers.

Males select a female and cling onto her back. The female then builds a nest about 15 cms (6 ins) deep in the sand, in the tidal zone. She lays up 1,000 eggs in this hole and the male releases his sperm onto them, so that they can be fertilised.

The female then covers the eggs with sand, which protects them from the action of the waves while allowing them to be warmed by the sun.

The larvae take about 6 weeks to hatch and pass through as many as 16 moults before they reach the adult form. They then have some further growing to do, before they reach sexual maturity at 3 or more years of age.

In their early stages, the horseshoe crab larvae look a bit like trilobites and are sometimes referred to as ‘trilobite larvae’. This long juvenile period suggests that Merostomata are long lived animals, but I have no information on just how long they live as adults.

Well, I hope this page has given you an interesting glimpse into the world of Class Merostomata!

While you’re here, don’t forget to check out their cousins the Sun Scorpions.