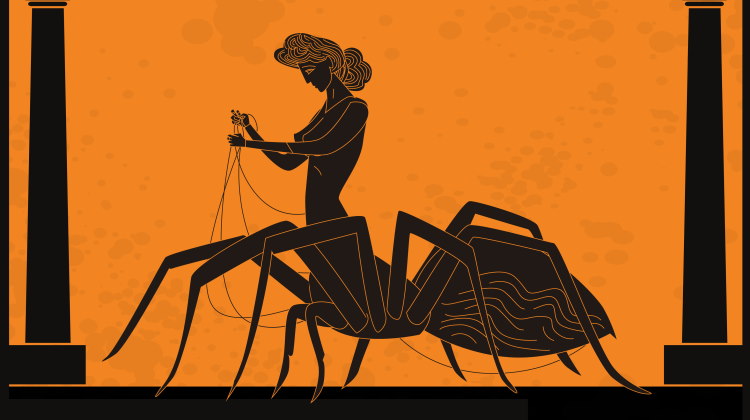 Tarantulas (or Theraphosids) have recently become relatively familiar creatures in Europe and North America. However, despite our familiarity with these large, relatively harmless spiders – they are not really a sufficient part of our history for us to have included them in our myths.

Tarantism, as it occurred in Europe during the Middle ages, had nothing to do with what we call ‘Tarantulas’ today. Nevertheless, the word ‘Tarantula’ stems from Europe and was given to the Theraphosids of America (and other places) by Europeans because these spiders reminded them of their own ‘Tarantula’ – about which a strong body of folklore and mythology exists.

This folklore arose in the 14th century around the Lycosid spider Lycosa tarantula, in the area of Taranto in Southern Italy.

It started with the peasants who worked in the fields. When they thought they had been bittern by a spider, they danced a wild and frenzied dance – to exhaust themselves in order to survive the bite. Later on, this dancing evolved into a cult and there is much controversy over the social forces which were involved in its expression in the following centuries.

Apart from this, modern thought also casts doubt on the role of the ‘Tarantula’. Suggesting that most genuine cases were the result of bites by the European Black Widow latrodectus tredecimguttatus, which lives low in the vegetation; rather than of bites by Lycosa tarantula (which like its Theraphosid cousins, lives in a hole in the ground and is quite shy).

However, the local people of the various parts of the world where Theraphosids occur naturally, have made them a part of their mythology.

One of these groups of peoples are the Indians of Southern USA and Mexico. These mythologies may not all relate specifically to ‘Tarantulas’, as the terminology is often just translated as spider. However, in many cases it is referring to a ground dwelling Theraphosid – particularly Old Mother Tarantula.

A very old belief that is part of several different Indian cultures, is the Pima myth that the world was created by Chiowotmahke the Earth Prophet.

He took the form of a Spider and spun a huge web across the void, creating the Earth in the process. He then changed form again to become a Butterfly. As the Butterfly, he flew down to the Earth and created mankind. Cave paintings can be found in California depicting this scene.

Also in California, Chumash Indian mythology states that the Sun God Kaqunupenawa rests by day in a hole in the ground created for him by ‘Spider Woman’, while his rays warm the Earth.

The Navajo used to live in what is now known as the Canyon de Chelly National Park.

This contains an amazing monolith of rock, 800 feet high, known as ‘Spider Rock’. This rock according to Navajo legends, was the home of ‘Old Mother Tarantula’ or ‘Spider Woman’. Mixed up with this are stories of a spider who would climb down from the rock to catch children and carry them back to the top to eat.

Navajo mothers apparently told their children that the outcroppings of white quartz at the top of the monolith were the bones of disobedient children who were more likely to be caught by the spider!

Another Navajo legend recounts how a Pueblo Indian girl – who was living with the Navajo – was so lonely she just wandered off into the desert. Here she saw a thin wisp of smoke arising from a hole in the ground, on looking inside she saw ‘Spider Woman’ spinning a blanket.

It goes on to tell how Spider Woman befriends the girl and teachers her how to spin cloth. With this new and valuable skill she returns to the village, where she teaches the other woman to spin – with the condition that they must leave a small hole in each blanket to remind them that it was Spider Woman who taught them how to spin. Needless to say she is now accepted by everybody and is much happier.

Another myth shared (in various forms) by several Indian peoples is that ‘Old Mother Tarantula’ saved the 1st man and 1st woman from the wrath of Kukumat.

The story goes that the 1st man and 1st woman spent so much time bickering and arguing, that Kukumat sent a flood to get rid of them because he was tired of listening to the racquet they were making.

As the flood waters rose, the 1st man and 1st woman were eventually saved by Old Mother Tarantula – who span a raft for them to escape the flood on.

Another legend explains how Spider Woman helps the 12 brothers, who were the children of 1st man and 1st woman, hunt down Coyote (who, in not becoming a domestic dog, has disobeyed the hunters).

When they eventually catch and kill Coyote with Spider woman’s help, she takes the skin as a trophy – which she wears on her abdomen. From this time on, all Tarantulas have a patch of rough hairs on their abdomens.

Another group of Indians known as the Zuni have a legend which states that after Winter Thunder (a bad guy) blew Rainbow boy to bits, Spider Woman sent her Spider Girls to rescue Rainbow Boy. The Spider Girls, by spinning and weaving all his nerves and blood vessels back together again, were able to bring him back to life.

After this, Rainbow Boy was able to prevent the other Thunder Beings, Black Whirlwind and Black Metal from destroying all the tribes.

In Mexico, it was believed that the creation of the world was assisted by Tocotl – a Spider God, who spins a huge hammock to hold the world up. The Mayans believed that after death of the body, the soul was destined to wander through the many dark passages of the underworld – until they met a great river which they could not cross on their own.

Each soul can only can only get to the other side of this river with the help of a spider person. The spider people spin a web raft and then one spider person and one soul journey across the underground river, linked in a sort of spiritual bond such that each is totally dependent on the other until they safely reach the other side.

Other Spider Mythology And Folklore

The Bhil and Mat people of India believe that the spirits of their ancestors live on in the bodies of spiders, particularly those that share their houses (See Common House Spiders).

The Chibchas of South America tell us that the souls of the dead need the webs of raft spiders, so that they can cross the river that separates the living from the world of the dead that is at the centre of the earth.

The Hausa tribes of West Africa make spiders into the heroes of folk tales, believing they possess great wisdom.

In a number of West African tribes there are legends that relate how the spider’s thread symbolises our connection with God. This use of the spiders web to symbolise the interconnectedness of life that the people saw in the world around them is very interesting.

No discussion of spider mythology, even as brief a one as this, would be complete without mention of the giant figures dug into the Earth’s surface 2,000 years ago by the by the Inca people of Nazca Peru.

Among the many animals depicted there, is a spider. By far the largest spider image in the world, this incredible piece of art is 50 metres or 160 feet across! Nobody really knows why it was created.

In Borneo, the spider is also a strong creative figure. There is a legend there that Mother spider spun a huge web that covered the whole world – including the original tree. Then, with the help of an insect larvae she was able to stimulate the tree to produce human beings from its leaves.

In China, spiders are part of the ‘Wu Tu’ or five poisonous animals; however they are also revered as the apostles of Confucius – and thus possess much wisdom. In Japan, the spider god is a great tactical genius. In Italy the garden spider Araneus diadematus was honored because of the white cross on its back.

The wisdom of spiders is also reflected in their use in divination. Widely disparate cultures – such as those in Bali, Indonesia and Cameroon in Africa-  used spiders (among other animals) as a means to see into the future.

The British people are renowned for their love, often eccentric, of animals. This probably (at least partially) explains why, in 1936, a policeman controlling traffic on the Lambeth bridge in London stopped all the traffic to let a large spider cross the road in safety.

His actions were much appreciated by the nearby pedestrians who cheered wildly, as the spider made it safely to the other side.

However, this is not the oldest spider image in the world. That record belongs to a splotchy image drawn by an unknown prehistoric artist on the wall of cave in Gasulla Gorge Spain.

This painting is not only interesting because of its great antiquity, but also because the spider is attended by 6 smaller blotches that some people interpret as flies. Since these ancient times, spiders have often featured in human art works.

Well, I hope this has been an interesting glimpse into some of the spider legends and myths out there!

While you’re here, don’t forget to check out our page on spider stories too.