Home
chelicerata
What Do Spiders Eat? Taking A Look Into The Spider’s Diet
Help us spread the word...
TwitterFacebookPinterest

Spiders are living animals and they therefore need to eat – just as you and I need to eat.

For spiders, eating means first catching some other living animal. Most spiders are not fussy, though some have definite preferences and some have hunting techniques that catch them a particular type of prey (see Spider Silk).

What Do Spiders Eat?

Most spiders eat only living or freshly killed food, and most are not fussy about their prey. Having said this, many spiders will take dead prey in captivity; and in some species it is not uncommon in the wild.

In particular, Wandering Spiders are known to be scavengers when the opportunity arises – and the Mouse Spider Scotophaeus is also known to take dead insects in the wild. Also certain social spiders are known to scavenge the dead bodies of other colony members.

Thus, if you keep spiders you will notice that some spiders will not eat certain true bugs (Hemipterans) and ticks (Acari) and even woodlice or rollypollies (Isoptera).

Different species of spider have different ideas about what is good to eat and what isn’t. For instance many spiders won’t eat woodlice, although the house spiders in the genera Tegenaria will.

However there are some spiders that do have particular diets, or prey items, they specialise in.

Among these are spiders in the genera Dysdera specialise who specialise in eating woodlice, preferring them to other foods. 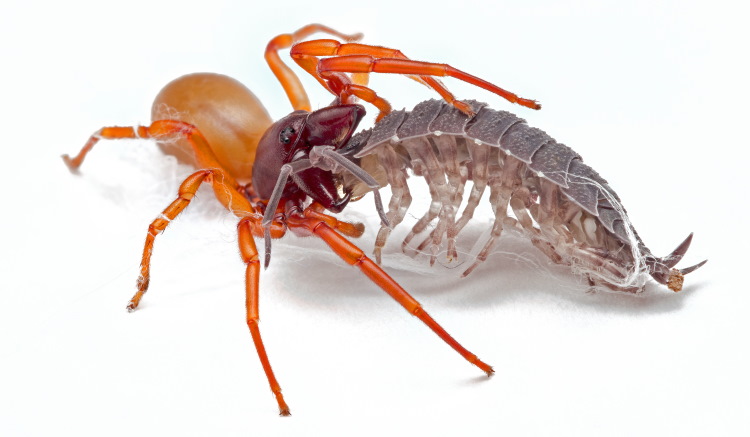 Woodlouse Spider (Dysdera crocata) eating a woodlouse – its only diet.

Pirate spiders protect themselves by having a potent quick acting toxin that immobilises their prey after just one quick bite to a leg extremity. They also trick spiders out of their retreats, by mimicking mates of prey caught in the web.

Ants are also potentially dangerous prey and Zodariids such as those in the genus Zodarium (which attacks ants of the genus Cataglyphis) also attack their prey quickly, making a single bite and then moving away until the ant is overcome.

Ants are very common animals in most environments and it is not surprising therefore, that there are also ant specialists in other spider families: Callilepsis nocturna from the Gnaphosidae (on Formica spp.); and species of Salticidae on Pseudomyrmex spp.

Will Spiders Eat Vertebrates And Mammals?

While most spiders feed on invertebrates most of the time, they will take vertebrates when they can.

Reports of Dolmedes catching small fish several times her own weight; of Leucorhestris taking small lizards up to its own weight; and of Lycosids and Pisaurids catching tadpoles and small fish are fairly well documented. 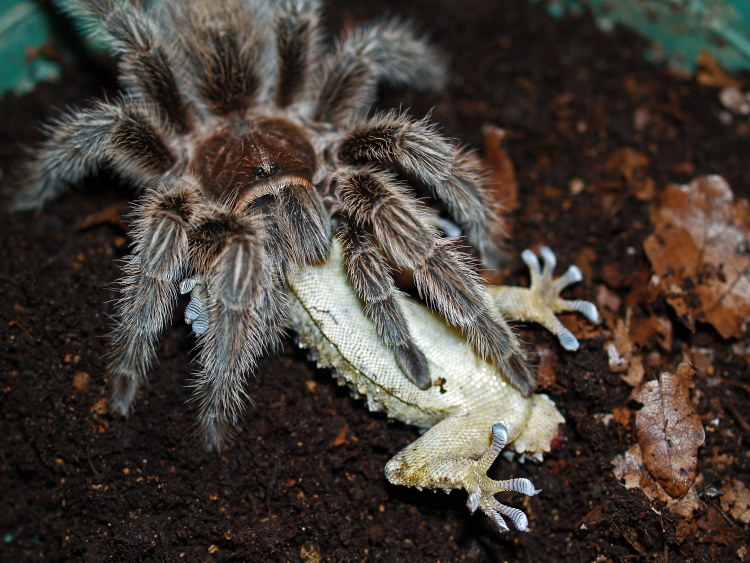 Evidence of large spiders taking small birds is also known in the tropics.

The first tales of tarantulas taking snakes in the wild were written by the Roman Pliny, 2000 years ago – however this was not scientifically verified until 2017. However, they are commonly fed them in captivity.

In captivity, tarantulas have been recorded killing and eating 30cm pit vipers and 45cm rattlesnakes as well as frogs and lizards.

Stranger still, in 1924 Reginald Pocock described finding a Poecilotheria regalis feeding on a rat in India – though no mention is made of whether the spider actually killed the rat.

Strangest of all is a tale from Australia written in 1919 by a Mr Chisholm.

He describes finding a chicken that had been killed and dragged 16 metres (50 feet) to a burrow by a Barking Spider Selenocosima spp. The chicken was much too big to be puled into the hole – and was found with one leg down the hole and the spider hanging on to that leg.

How Do Spiders Eat?

For spiders that actively hunt their prey, the first step in catching dinner is to locate it.

Spiders that chooses to sit outside their burrows or hideaways and wait for some suitable organism to wander past (like some tarantulas and wandering spiders), rely on vibrations to tell them what is going on.

Spiders such as Cupennius can hunt just as effectively with their eyes covered, as with them working. However spiders that go out actively looking for prey and hunt it down (such as the wolf spiders and particularly the jumping spiders), rely much more heavily on sight.

Nearly all spiders use venom to immobilize their prey before feeding. This makes it easy for them to feed on otherwise dangerous animals. Some Crab Spiders will catch Bumble Bees far heavier than themselves. See Spider Venoms. 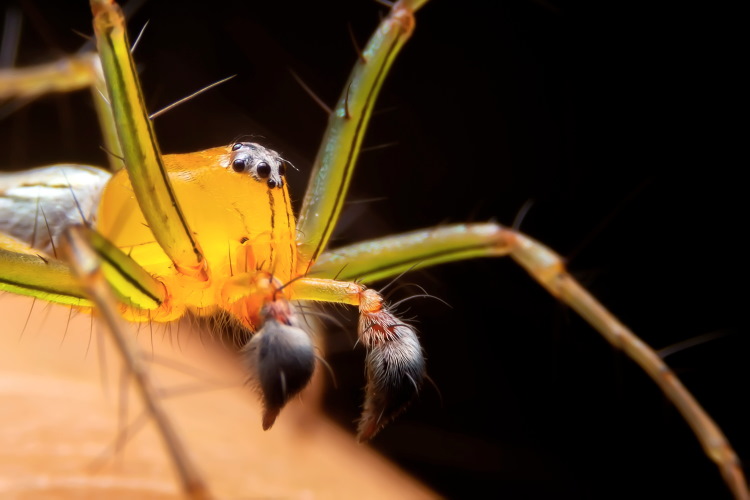 Close up of a Jumping Spider, showing its fearsome looking chelicerae.

However, once the prey is caught, it needs to be eaten and spiders practice what is called external digestion.

This means that enzymes and other digestive juices are injected or spat into the prey’s body.

The soft tissues are broken down by these juices and sucked up by the spider. For spiders, soup is the only thing on the menu. Some spiders, such as tarantulas and many of the orb-web spiders, use the teeth on the basal segment of the chelicerae to mash their prey while they are feeding.

In these cases, all that remains after the spider has finished eating is a small, dark blob of cuticle. Smaller spiders, especially those that feed on larger prey such as the Thomisidae, bite only a small hole in the cuticle of their prey – and suck the juices out through this. In this case what is left is a pretty intact shell of the prey animal.

Well, I hope this has helped you to answer the question of what spiders eat!

Perhaps now you’d like to learn more about spider anatomy.