Any look at spider poems and stories wouldn’t be complete without first understanding the word ‘spider’ itself, where it comes from and what it means.

So with that said, let’s do just that. However, you can also skip ahead using these links:

The word ‘spider’ is of course just the term we use in the English language to describe a certain animal we all perceive – but other languages have their own words to name these wonderful animals too.

The English word spider comes from the old English Spithra for spinner.

*  Lingala is spoken in the western part of the former Belgian Congo (Zaire) and along the Congo river.
**  Kiribati was formerly the Gilbert Is. It is prononced ‘n-tak-ar-ow’; ‘ow’ as in owl.
***  Tagalog is Filipino language.
****  The Maoris do not classify nature in a way that relates well to the Western mind. Hence in their language there are a number of words which can mean spider – but they can also mean something more or even different. Papangu, papanui, papapango, paparangi and tuturi may all refer to spiders (He ingoa ngarara / Insects and Spiders, by Arihia Smith).
!*  Flemmish is not really a language but a collection of dialects spoken in northern Belgium.
!!*  Punjabi is spoken in both India and Pakistan

Please note that many of these words are not normally written in the western alphabet and they have been written here in an anglicised form.

Where two vowels are written together, both vowels should be pronounced; thus Pauk is ‘Pay uck’ – with the emphasis on the last syllable in this case. Also in some languages there is not a single word for spider; in the Gujrati language (from India) for instance, there are two words “Maakdo” for male spider and “Maakdi” for female spider.

In other languages, the word is impossible to render with the English alphabet. Thus in the Cheyenne language of the American Indians, ‘Spider’ becomes Ve?ho?e where the ‘?’ signify glottal stops.

Spiders have been around a lot longer than people, at least human people. However, it is inevitable that humans have known something about spiders for a long time. Spiders are certainly ubiquitous and everybody knows what a spider is! Were I to mention Collembola (Springtails), far less people would know instantly what I was talking about – even though there are more than 6,000 species of Springtail on the planet.

With thousands of cultures spread out across the planet, it is inevitable that an animal both as common and as remarkable as the spider should be become involved in many poems and stories.

Many of these takes the form of myths and legends, but these are dealt with in the Spider Mythology page.

I will only be able to touch on a few poems and stories here, but I hope you can enjoy what I have supplied. Let’s start with a quote from The World of Spiders by W. S. Bristowe, one of the world’s master arachnologists:

The really remarkable feature of all these diverse thoughts and beliefs, of multiple origin throughout the world, is that in every continent and in nearly every country they seem to have yielded one common idea – that it is unlucky or unwise for a man to kill a spider. ….and leads to the sparing of spiders’ lives by Europeans and Mohammedans…

Hence we have the rhyme, common in both the USA and England:

If you wish to live and thrive
let a spider run alive.

We also have the famous poem ‘The Spider and the Fly’ by Mary Howitt, 1821:

Will you walk into my parlour?” said the spider to the fly;
“’tis the prettiest little parlour that ever you did spy.
The way into my parlour is up a winding stair,
and I have many curious things to show when you are there.”
“Oh no, no,” said the little fly, “to ask me is in vain,
for who goes up your winding stair can ne’er come down again.”

This little rhyme originally comes from Mother Goose, but I learned it at primary school in Australia where it was an action song. We used our hands to act out Incey climbing up the spout, the rain washing him away and then the sun coming out… and his final triumphant conquering of the drain pipe mountain (at least that’s how I saw it then).

Finally, I must leave you with one more piece of spider poetry and an unusual tale.

One of the first books published in the English language on spiders was the Theatrum Insectorum by Dr Thomas Mouffet. This book was finished in 1589, but was not published until 1634 – long after Dr Mouffet had died.

Dr Mouffet was fascinated by spiders and thought they were wonderful, not only to look at (he kept many in his house) but also as medicine for many different ailments. He had one daughter called Patience whom he forced to partake of these medicines, including eating live spiders.

Is it any wonder poor Patience suffered seriously from Arachnophobia. It may be that she is remembered in the following poem later published in the Mother Goose anthology:

Little Miss Muffet
sat on a tuffet
eating her curds and whey.
There came a big spider
and sat down beside her
and frightened Miss Muffet away. 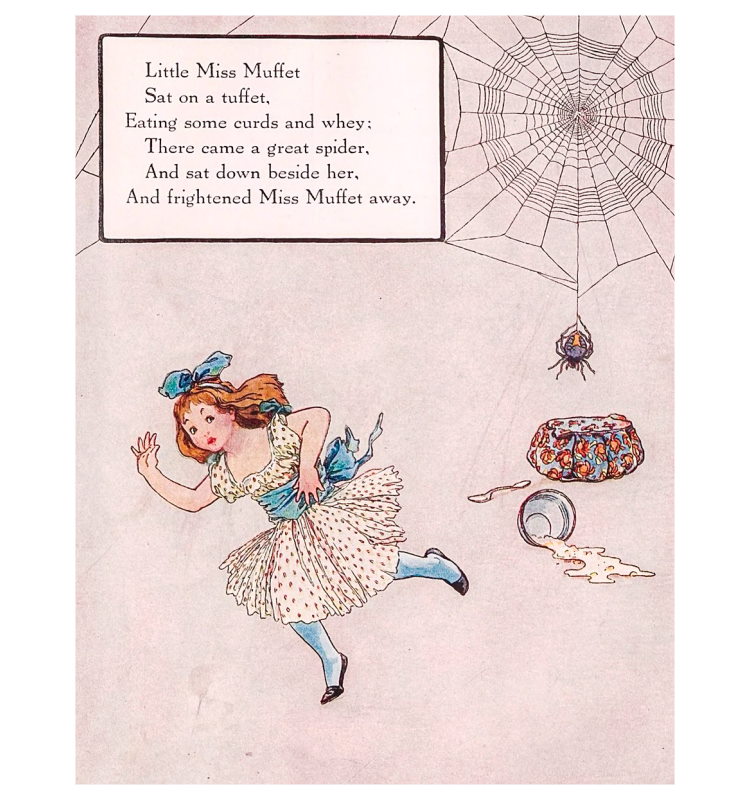 Surprisingly, the Egyptians say little about spiders – though they can hardly have been unaware of them.

Also, most of the Old Testament Bible and the Quran, whose writers were normally good observers of nature, refer to the spider only in terms of the frailty of its webs. Only in the Proverbs of King Solomon do we find some appreciation of the spider.

“There be four things which are little upon the earth
but they are exceeding wise;
the ants are a people not strong,
yet they prepare their food in the summer;
the conies are but a feeble folk,
yet they make their homes among rocks;the locusts have no king,
yet they go forth all of them by bands
The spider taketh hold with her hands,
and is kings’ palaces”

The first is from the Bible, where David was being hunted by Saul. When David hid in a cave, God sent a spider to weave a web across the entrance. When Saul and his henchmen arrived, they saw the web and so assumed nobody could be inside because the web would have been broken.

The Prophet Mohammed is also reported to have been similarly protected from the Coreishites, when he hid in a cave after having been forced to flee Mecca.

Finally a 12th century Japanese hero called Yoritomo is also supposed to have been saved by a spider spinning a web across the opening of a hollow tree he was hiding in.

The most famous story of a spider influencing human history is perhaps the story of King Robert the Bruce of Scotland.

He was involved in a war with King Edward of England, who was trying to conquer Scotland. In 1306 he was hiding out in a cave (or a barn depending on which version you believe); he had already fought 6 battles against King Edward and had been beaten back six times.

While he was taking his rest, he watched a spider trying to set up the support lines for its web. The spider tried and failed six times. He said “Now shall this spider teach what I am to do, for I also have failed six times.”

The spider made its seventh attempt and this time succeeded. Inspired by this, King Robert the Bruce of Scotland set about rallying his troops and in 1314 he defeated King Edward of England and drove him out of Scotland.

Spiders of course have appeared in literature for centuries and Shakespeare used them often. One example from The Merchant of Venice, Act III, Scene II, Shakespeare likens the wiles of women to the web spinning of a spider:

Here in her hairs
the painter plays the spider, and hath woven
a golden mesh t’entrap the hearts of men