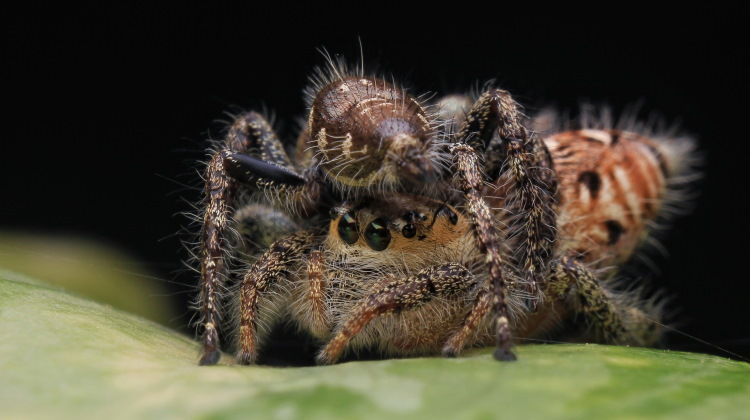 Like all animals, spiders reproduce. The biology of reproduction has two sides to it.

First, there is the anatomy and physiology of the reproductive organs and secondly there is the ecology of “boy meets girl”.

For information on the anatomy of the spider’s reproductive organs, check out the Spider Anatomy page. But to learn how spiders mate, read on.

Within this simple plan, spiders have evolved a wonderful range of strategies and behavioral characteristics.

The greatest diversity of characteristics is found in the moments immediately after contact. Spiders are carnivores and cannibalism is quite acceptable to them. In many species, the male has to work hard to convince the female that he is a potential mate – and not dinner.

In most species in fact, the male is able – one way or another – to leave the female and depart from her web after mating. This idea that all female spiders always eat their mates just isn’t true.

In many species, the males have worked out clever methods to ensure their survival. In others, the male is so small that he is of no interest to the female… and as I just said, in some the two live together quite happily.

Mr Bristowe maintains that most adult male spiders simply die of hunger and exhaustion because they spend all their energy finding and courting females – and never stop to eat.

While the largest and most fascinating aspects of the variation come in the ways that male spiders circumvent the predatory natures of female spiders, there other areas that show variation as well – and I would like to look a little more closely at these first.

How Do Spiders Mate?

When a male spider reaches maturity (and is ready to start looking for a mate) he first spins a sperm web.

This structure varies from family to family, but generally it consists of a few support strands and a small triangle of tight web at (or near) one edge. The male spider then places the epigastric furrow of his abdomen against the triangle and, often rocking up and down, releases a drop of sperm on to it.

Then he dips his pedipalps into the sperm, which absorbs some of the sperm. Often he will moisten the tips of his pedipalps with his mouthparts first, and he may also climb under the web and then reach up and around to load his pedipalps.

The genus Scytodes offers one good example of a variation. Here the sperm web has been reduced to a single thread, which the male draws across his genital opening with his 3rd pair of legs. The drop of sperm collects on this and is then transferred to the pedipalps.

Female spiders also show variation in the way they prepare and then look after the eggs and the egg sac, after mating.

Some spiders, such as Heliophanus cupreus, simply lay their eggs in their own silk retreat – stretching a few strands of silk over them and then guarding them until they hatch. Most species however, spin much more substantial cocoons or egg-sacs to hold the eggs safe.

This is particularly necessary to species where the mother dies before the eggs hatch. Other species spin a protective cocoon and then keep it in their retreat to watch over it until the young hatch. The Orb-web spider Araneus quadratus is an example of a spider that dies as winter closes in, but whose eggs survive the winter to hatch in the following spring or early summer.

When an Orb-Web Spider spins a cocoon, she first spins a circular base plate – for the newly hatched spiders to live in until their first moult (See Spider Molting). Then, from below, she spins a cylinder to make the sides; she then lays her eggs and spins another plate called the cover plate.

The whole thing is then wrapped in one or more layers of protective silk and suspended somewhere.

In comparison, Wolf spiders spin a similar construction but they add the cylinder walls from above. Some spiders hang their cocoon from threads after it is made; others build the cocoon with the base solidly attached to something.

In this way, the clubionid Agroeca brunnea spins its cocoon as an upside-down wine glass; it has two internal sections, one of which holds the eggs. It can also be a good example of a camouflaged cocoon, so it is quite a classy affair all up. The female may adds bits of soil to the outside of the cocoon, to help it blend in to the background.

Finally, as I have already stated, some spiders offer some brood care. The female may tear open the the cocoon so that the young spiders can escape; she may carry them on her back until after their first moult; and in a number of cases, she will feed them with the prey she herself has caught.

The cocoon offers protection from cold, from desiccation and to some extent from predators and parasites. The downside is that some birds collect them to line their nests.

Different species of spiders produce different amounts of eggs per cocoon. Also some spiders produce two or more cocoons in a year; and some such as tarantulas may live for many years producing young every year.

It is not possible, therefore, to state clearly what the reproductive effort of spiders in general is.

Consider also, that the health and size of any individual female spider varies – and this also effects the number of eggs she can produce. As a general rule larger spiders produce more eggs, but there are exceptions.

Here are a few examples of spider eggs per cocoon, from England. The number of cocoons is based on the likely maximum in the wild, though more may be produced in captivity.

The Average Numbers of Eggs per Spider Coccoon

Once a male spider is mature, he charges up his palps and sets out in charge of a mate. His searching involves checking out areas of suitable habit; when close, pheromones and chemotactic responses ensure a female is the correct species.

Male wolf spiders are known to recognise and follow the draglines of females.

Also males often mature earlier than females because they are smaller and go through one or more less moults. In some cases, this allows the males time to find a female before she is mature. In such cases, he will often move in next door.

This not only ensures he will be there after she has gone through her final moult, but also gives her a chance to become accommodated to his presence to some extent.

The biggest problem many male spiders have is letting the female know that they are a mate and not dinner. This is initially done through courtship. As you can imagine, male spiders tend to approach the females cautiously until they they are convinced the female knows who they are (and even then many of them like to have some insurance).

Males spiders have evolved a wonderful array of habits to fulfill these two roles of Spider Courtship and Insurance.

Well, I hope this page has given you an interesting introduction to spider reproduction and helped you understand a little about how spiders mate.