Continental history collides with geothermal and climatic factors to create the extraordinarily unique ecosystem of New Zealand. With only two native land mammal species, birds, reptiles, and invertebrates have evolved to fill the role of mammals developing peculiar adaptations along the way.

New Zealand’s isolated position and late colonization left wildlife without many evolutionary pressures. Some species have remained unchanged for millions of years, making them “living fossils.” The introduction of mammals with European arrival has put species at dire risk. Most are not equipped to deal with terrestrial predators such as cats, rats, and mustelids.

You may be familiar with the oddity of the Kiwi bird, but the strange creatures do not stop there! Check out this collection of 10 amazing animals you may encounter in New Zealand.

The elusive Kakapo is the parrot that defies parrot laws. This bizarre bird is the only flightless, nocturnal, and solitary parrot. They are also the heaviest parrot, weighing between 0.95–4 kg (2–9 lb).

Kakapo is the only parrot that utilizes a lek breeding system. The male can put an incredible amount of work into attracting a mate, losing up to half his body weight in the breeding season, which is only every 2–4 years. He will craft a bowl on the ground with projecting tracks of up to 50m (160ft) long. This court acts as an amplifying theater to project his calls across the forest, calling for 8 hours straight each night for up to 3 months.

Kakapos are critically endangered, with numbers once as low as 17 known individuals. They have since been relocated to three offshore islands, which are maintained as pest-free. The current population is 202 birds. 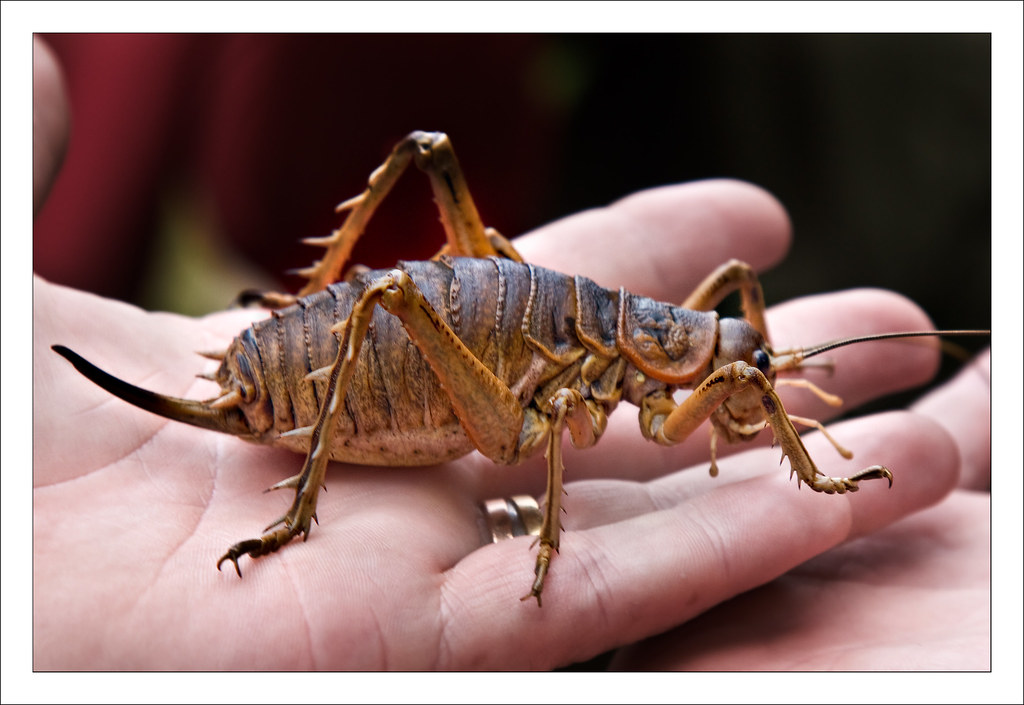 Photograph “A handful of Giant Wepa” by Mike Loche

Fulfilling the role of rodents in the ecosystem are enormous insects. The Giant Weta is one of the largest insects in the world, with the heaviest recorded gravid female weighing in at a whopping 71g (2.5oz). Generally, they average at around 35g (1.2oz), which is heavier than a house sparrow or a mouse.

These colossal creatures were targeted by introduced mammals and, once widespread, are now mainly found on offshore islands. However, in recent times surviving populations were found on the mainland in invasive gorse bushes. This prickly plant protected the weta from mammalian predators. 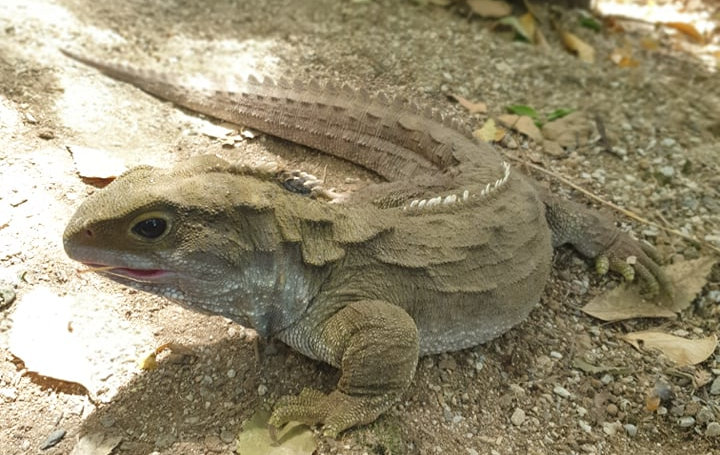 New Zealand’s very own “living fossil” is the tuatara. This miniature dinosaur has remained unchanged since it originated over 200 million years ago. It may look like a lizard, but the Tuatara is distinct. It shares common ancestors with squamates but evolved separately before modern speciation.

The archaic biology of the tuatara gives a unique insight into reptile evolution, and many physiological characteristics are very primitive. Tuatara have rows of sharp bone that act as teeth; these slot perfectly together, not seen in any other reptile.

They also possess a third eye smack bang in the middle of their forehead. This is visible when tuatara are hatchlings but is covered in scales during development. The true function is unknown, but it’s thought to be related to light detection.

The Whio may look like any old duck, but they are the thrill seeker of New Zealand’s birds. Whio have adapted to rapid habitats, residing in areas of fast-flowing water all year round. Ducklings are born pro white water rafters, scaling gushing water with ease only hours after hatching.

Blue ducks are the only duck to have lips. The end of their bill is bordered with rubbery tissue that provides protection as they scrape insect larvae off river rocks.

Identifiable by their whistling, males call to establish territories, attract mates, and assert dominance. At the same time, females respond with a low, guttural growl. No clear link has been made to other duck families, but the closest relation seems to be South American dabblers. 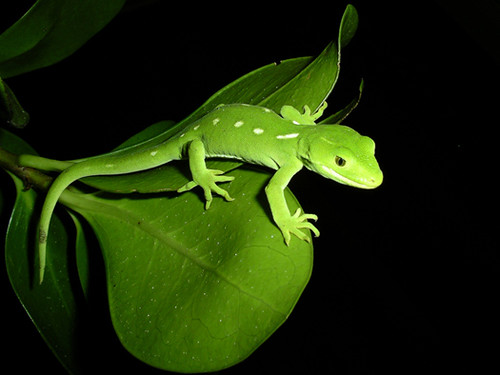 New Zealand is often called the “Land of The Birds.” Although there are remarkable bird species, the lizard species are just as unique. For example, the Wellington Green Gecko stuns approaching predators with bright blue mouths and aggressive barking vocalizations.

Totally arboreal, the green geckos cling to trees with their characteristic yellow feet, feasting on berries and flowers. Their fluorescent green coloration helps them camouflage amongst the foliage. To increase their young’s survival, they are ovoviviparous and give birth to live young, often twins. 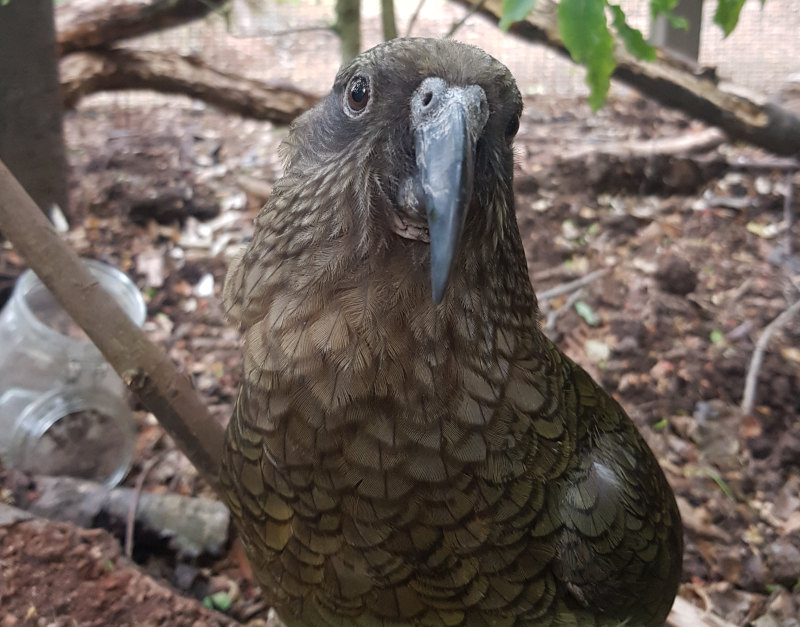 Seeing the magnificent kea in the wild is a bucket list item for many visitors. This notoriously mischievous parrot is known for its intelligence, passing cooperation tests, and displaying tool use.

They are also highly curious, which leads them to getting to no good, such as stealing tourists’ passports or locking a visitor in a national park toilet cubicle. However, it’s not all fun and games. The keas eagerness to interact with humans puts them at risk. Malnutrition is common for kea fed regularly by visitors. They also have a taste for lead flashings on old buildings.

Food can be scarce in the mountains for the world’s only alpine parrot. Kea have a history of predating on live sheep, angering farmers. In fact, the government had a paid bounty on the keas head in the 1800s, which drastically reduced their population. They were the last native bird to be fully protected in 1986. 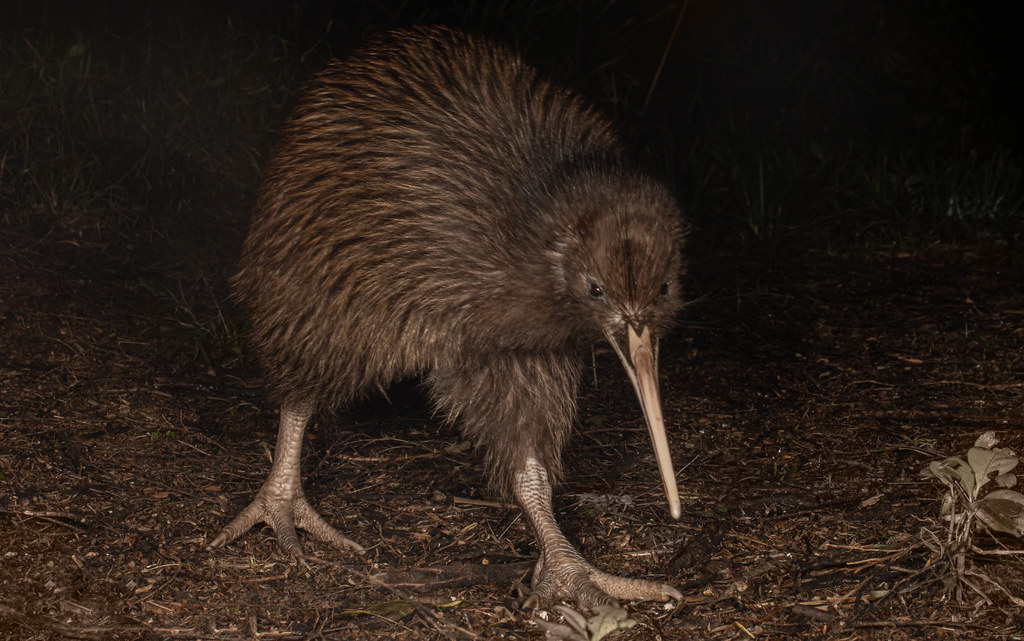 You didn’t think we forgot the kiwi, did you? This New Zealand icon is the poster child for incredible animals. Entirely ground-dwelling, the kiwi is active under cover of night and is famously evasive.

Kiwis have occupied the ecosystem niche of ground mammals so long that they began to evolve mammalian traits such as:

There are five living species of kiwi. The most prevalent is the North Island Brown, with populations estimated at 35,000, while the Rowi has only 500. Kiwis produce the biggest egg relative to body size of any animal. This giant egg allows for the full development of chicks that hatch requiring no parental care.

However, these chicks are extremely vulnerable to introduced predators, with only 5% making it to adulthood. To combat this threat while pest reduction is undertaken, Operation Nest Egg raises chicks to young adults and then releases them to increase survival rates.

Like all New Zealand’s endemic wildlife, the three native frog species are evolutionarily the same as they were 200 million years ago. Young hatch as fully formed frogs that hitch a ride on their father’s backs; they do not have the usual frog tadpole stage. Endemic frog species cannot croak and barely make a peep unless directly threatened.

The tiny Archey’s frog was once widespread but has massively declined in the last 25 years due to the impact of introduced mammals and the prevalence of Chytridiomycosis fungus. They are now found naturally in a tiny far north area, while a translocated population is starting to reproduce in the Waikato. 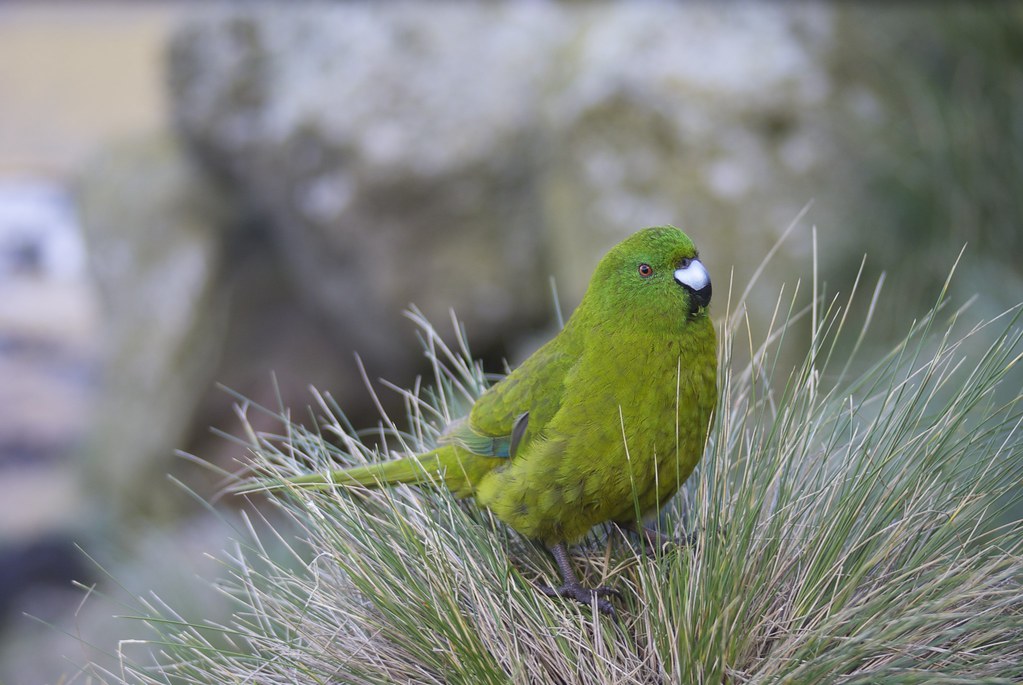 Antips are one of only five ground-dwelling parrots globally despite being excellent fliers. This adaptation helps them thrive in the wild and stormy habitat of the isolated Antipodes Island. To nest, Antips dig tunnels as far as 2 meters deep to protect young from the wind.

Tiny but mighty, Antips are one of two predatory parrots—the other being the Kea—and will kill and eat nesting petrel species to supplement protein in their limited diets.

These tough parrots are known to be inquisitive and mischievous. They can be viewed in a few select facilities where they once championed a breeding program. The captive genetics are now too limited, so they exist as an insurance population. 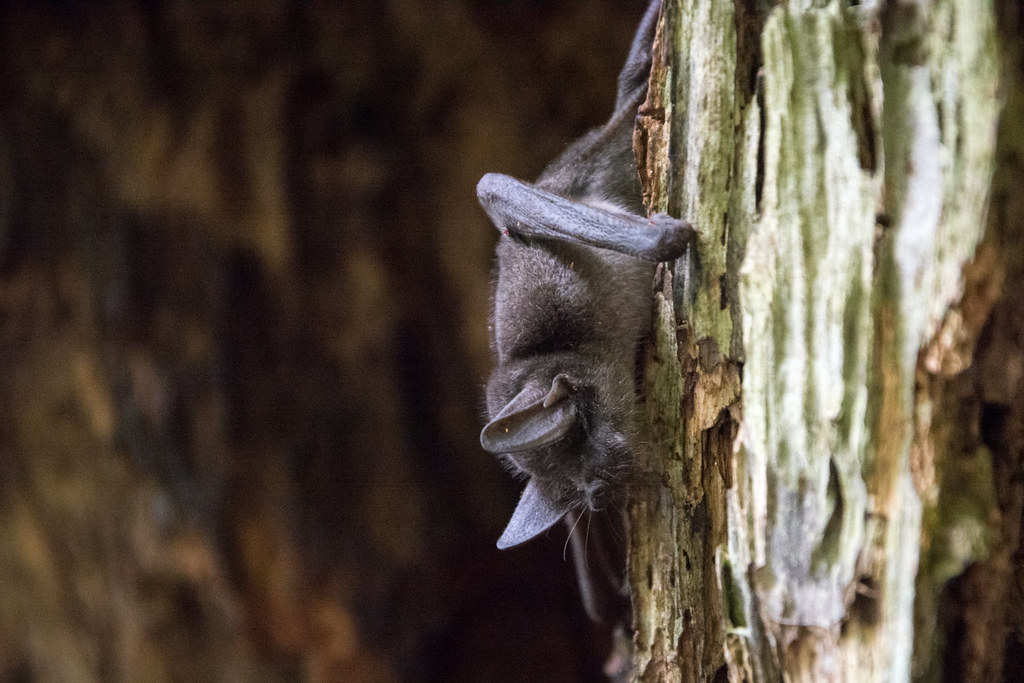 Even the mammals in New Zealand have wings! Two species of bats are the only endemic land mammals—aside from semi-terrestrial seals. The short-tailed bat is unique for its ability to hunt both in the air and on the ground. It’s one of the very few bat species that spend a significant amount of time on the forest floor.

This species is the only pollinator of the ground-dwelling dactylanthus plant, New Zealand’s only parasitic flowering plant. These two species depend on each other to thrive, and both are currently under threat.

Additionally, they are the only known bat species that have a lek breeding system instead of harems. Males compete for singing posts to use as courts to “sing” to attract mates.

Final Thoughts: The Land of The Birds

New Zealand certainly has some astonishing creatures, and to think we barely scratched the surface! Many more insane native species call New Zealand home, each as remarkable as the next.

Some of these critters are shy or uncommon, so viewing one in the wild is a real blessing. Many species can also be found in captive care facilities where they reside as rescues or as part of successful breeding programs. 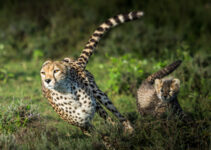 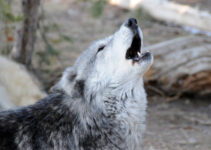 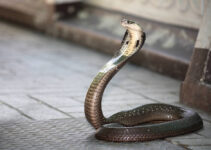 Sophie Herlihy has worked with animals her whole life. While studying Environmental Studies and Biology, she worked part-time in cattery care and veterinary assistance. She then landed a dream role as a conservation educator at Disney's Animal Kingdom. Upon returning to her home, New Zealand, she launched into Zookeeping roles working with exotic and native species, eventually finding her niche with native species of birds, reptiles, and invertebrates. LinkedIn Profile.