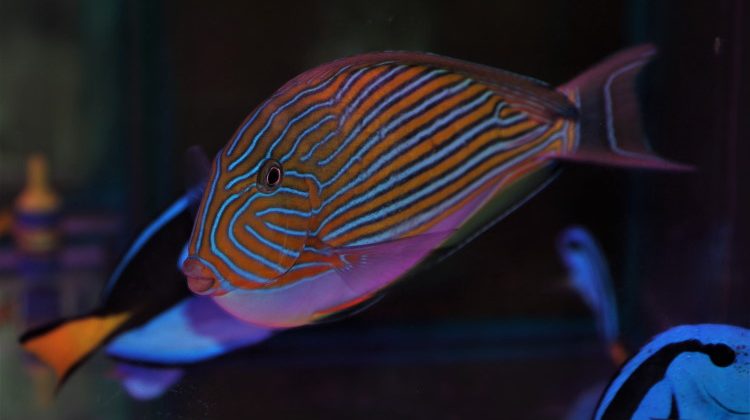 The Acanthuridae is a medium sized family of tropical fish, with 84 species divided between six genera:

They range in length from just under 12 cm, for the Dwarf Surgeonfish (Ctenochaetus flavicauda), to 100 cm for the Whitemargin Unicornfish (Naso annulatus).

Some species are quite dull in their colouration, but others are very attractive and are commonly kept by aquarists. They are also among the fish commonly shown on TV programs about coral reefs.

Acanthuridae are primarily associated with coral reefs and most of them occur in the Indian and Pacific oceans, only 5 species being found in the Atlantic. An interesting aspect of their anatomy is that they posses a sharp spine on either side of the tail, arising from the caudal peduncle.

This spine can be used in self defence against predators and competitors. In some species this spine is immovable, in others it is not and is then generally held recessed into a groove running along the body. However when the fish feels threatened it is quickly raised. Some species have more than one spine and in others the spine has been reduced to a small knob.

Most Acanthuridae species are known as Surgeon fishes because of the razor sharpness of this spin.

Acanthurids normally have their mouth proected forwards and they feed by grazing on benthic algae. However there are some species that feed on zooplankton and even some that feed on detritus.

Some species are a different colour when they are juveniles and when they are mature. The Blue Tang (Acanthurus coeruleus) for instance is Blue as an adult, but yellow as a juvenile. Other species, such as the Yellow Tang (Zebrasoma flavescens), which is bright yellow around Hawaii and brown in other parts of the Pacific, are differently coloured in different parts of their ranges.

Near the equator, Acanthurids will spawn throughout the year. But only a little distance from the equator they have seasonal spawning – from December to July around Hawaii for instance.

In some, if not all species, spawning is linked to the phases of the moon and only occurs when there is a full moon. The young fish hatch from their eggs in about 26 hours but wait another 5 days before they start to fed, during which time they absorb much of the yoke from the egg. They are carnivorous at first, feeding on small crustaceans and fish eggs. However they soon switch to the diet of their parents, which in most cases is algae.