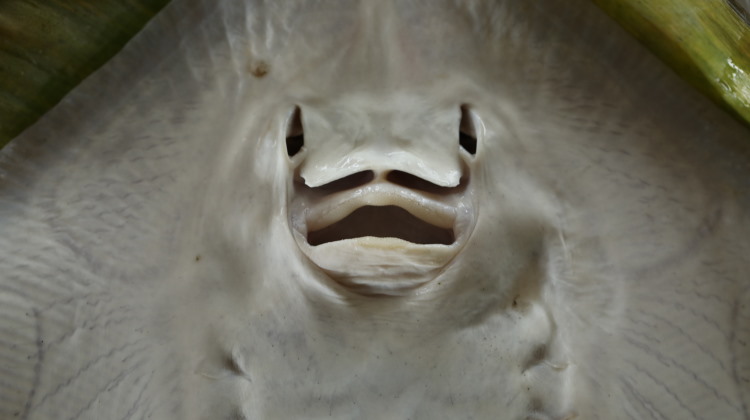 Sense of Smell in Fish

Scents disperse more slowly in water than they do in air, so do fish have a sense of smell is a good question. The answer is yes, the majorty of fish, and other marine organisms have have an olfactory sense.  In fact the olfactory sense may be older that hearing or sight.

Scents are an important source of information for fish. So much so, that many fish have four nostrils: two in and two out.

In this way, they are constantly able to access new scent information.

Do Fish Have Nostrils?

Not all fish have an olfactory pit (a.k.a nostrils, olfactory rosette [O.R.] and connective channels).

Puffer fish and their relatives in the Tetraodontidae have lost theirs completely and so have no sense of smell. Hagfish and Lampreys have only a single central nostril and O.R.

In Hagfish, water goes in through the nostril, over the O.R. and then continues on into the gut (see fish digestive system), but in Lampreys water is pumped in and out of a muscular pocket called the ‘hypophysical pouch’.

Sharks and Rays – and some fish, such as Wrasses and Cichlids – have only two nostrils. In the elasmobranchs and in some of the fish, each nostril is divided into two halves by a flap of skin (an inlet and an outlet half) and water is pumped through, and over, the O.R. by beating cilia.

It is where the scents are actually detected and its surface is greatly folded. Thus allowing a large number of sensory cells to be packed into a small area. These sensory cells are basically the same as those used for taste, however nerves from the O.R. lead to the olfactory center of the brain – a distinct and separate part of the brain from that used to analyze tastes.

How Do Fish Use Smell?

Fish use their olfactory sense in a number of distinctly different ways:

Our oceans, seas, rivers and lakes are all horribly polluted.  The poor creatures that live there suffer a constant barrage of physiological stress because of the poisons we relentlessly pour into the world’s waters, especially this is true of the sea.  One of the byproducts of our unrelenting greed is ocean acidification caused by the rising CO2 levels in the atmosphere.

In 2018 a paper was published showing that rising acidification of the ocean’s waters was impacting the olfactory senses of fish.  They predict that if the current trend continues some species at least will lose 50% of their sense of smell by the end of the century.  Here is a YouTube video on the subject.

Well, I hope this has answered the question of “can fish smell” for you and taught you a few things about fish nostrils!