Home
fish
Genetically Modified Fish: Should We Be Concerned About GMO?
Help us spread the word...
TwitterFacebookPinterest

Genetic modification is an emotive term in our modern world. But what does it really mean?

A direct interpretation would mean that the organism in question (fish for now) have had their genes changed.

That is all it means. The genetic code has been changed to some small degree. However, it is a fact of life that the genetic data bases (the genes) of every group of organisms on the planet are changing all the time.

The existence of this change is one of the central components supporting the theory of evolution. Without genetic change, there can be no evolution – and therefore there would be no diversity of life. In fact, life would never have come into existence at all.

The wonder, beauty and awe-inspiring diversity of life on this planet is totally dependent on genetic change. On the fact that the genetic code that controls all known life is constantly changing.

If this is true, then why are so many people worried about genetically modified organisms?

A large part of the answer may be in the fact that the change in these organisms is directly mediated by human beings. However, a large part human society has been dependent on humanly-mediated, genetically-changed organisms for a long time. For a lot longer than we have known about genes.

Cows, pigs, horses, sheep, goats, dogs and cats (and quite possibly human beings themselves) are all genetically modified organisms. All are creatures that have had their genetic inheritance interfered with by humankind.

Some might say that the changes in these animals are different because they arose as a result of years of selective breeding, not as the result of the direct introduction of a foreign gene into the target animal’s genome in a laboratory under highly controlled conditions.

But is this really relevant?

Nobody would suggest that a Corgi or a Great Dane are not genetically different from the wolf we believe to be their distant ancestor. Modern dairy cows produce many more litres of milk a day than their ancestors did. Modern pigs grow bigger and faster than their ancestors, yet nobody seems worried about eating them.

Why then should we worry about eating genetically modified fish? Fish that have been given a gene from another organism that make them digest  their food more efficiently, and thus grow faster? There is not really any difference.

Some ecologists are worried about what will happen if fish escape the farms.

They claim they will out-compete the wild form and in time replace them. Or breed with them and thus replace the old form with a new one.

But is this a valid worry?

There are several points to this fear. The first is that fish will escape. This is not a theory. We know they will escape because it happens all the time. One sea-based fish farm off Norway lost over a million fish in one year.

The second thread to this fear is the out-competing of the wild form.

In terms of mathematics, this would not be a problem. Even a hundred percent replacement would not change the biodiversity up or down – just shift it a little sideways. 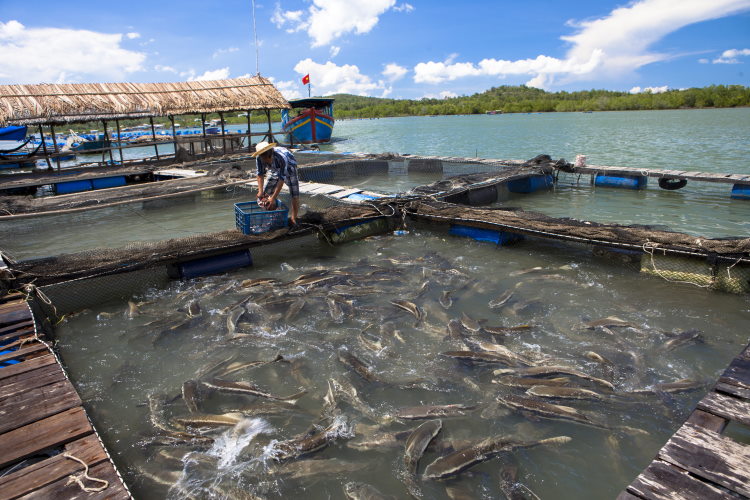 Man feeds his fish on a fish farm in Vietnam

It is a fear linked to Pandora’s box and its source is irrational. Although the higher mind is brought in to ratify and prove what the lower mind, in its darkness, fears (“we don’t really know much about what we are doing”). This is undoubtedly true and we will have to learn as we go along. But the box is open and it will not be closed. Trying to close it only results in blindness.

Science is a never-ending process. Even as I write this, the data I have researched is becoming out-dated. However, some recent research has shown that salmon – genetically modified to grow quickly – do not out-compete wild types.

When the study was finally done, it showed that the GMO form lacked the competitive edge in the wild environment. Pampered and spoilt, the fast growing GMO salmon stopped growing fast when they had to actively find and catch food, rather than just scoop up an overly plentiful supply of food-pellets.

Science is also addressing the third strand of this fear, that of interbreeding.

Researchers are developing techniques to neuter all the fish raised for sale in open water fish-farms. This does not invalidate the lesser fear that GMO fish may interfere with the normal breeding patterns of the wild form. While nature may well find a way to reverse these imposed conditions, it should be accepted that answers are being found  and we should remember that humanity is a part of Nature.

There really is no us and them – it is all us, all one. Humanity is just another thread in Nature’s weave and it is important for us living in the moment to remember the smallness of our point of view and the vastness of Nature’s tapestry.

Why Do We Need GMO Fish?

To recap, genetic modification is an ongoing process. One in which human science is learning to play the role of a catalyst.

We are woefully ignorant of how our actions will play out through time and for the most part our view of the world is distorted and human-centric. I can only advise that we throw away all our preconceived ideas and honestly seek the truth.

Science is not about proving anything. It is the materialistic manifestation of our eternal search for the truth, anything else is attempted manipulation.

However no consideration of genetically modified fish would be complete without considering the purely human perspective.

Why do we want GMO fish?

The human population on this planet is still growing – albeit more slowly than fear-mongers anticipated 30 years ago. And they all need to eat. Fish is an excellent source of protein and other nutrients for most of the world’s people. 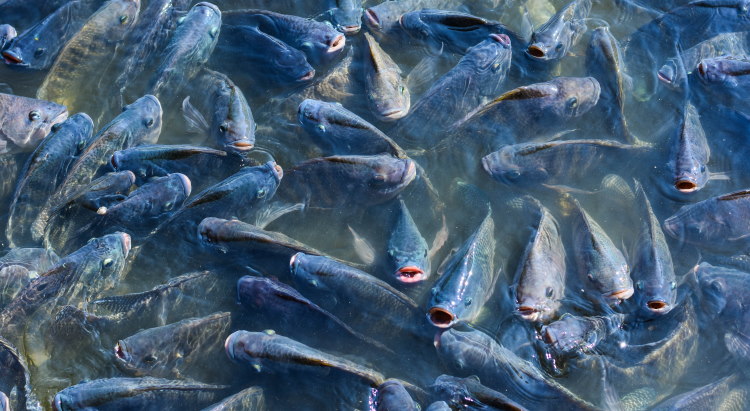 Feeding of tilapia, freshwater fish that were raised in ponds and cages

Fish farming is here to stay and it has many benefits, but it also creates problems. Mostly to do with pollution, but also involving the transmission of diseases to wild forms.

GMO fish with built-in resistance to disease and cold tolerance that would allow them to be farmed away from the habitat used by their wild form, would help alleviate some of these problems.

Farming fast growing fish offers many a potential meal to the future hungry children of the world. However, while it is true that the world today actually produces enough food to feed everybody, humanity’s inhumanity, wars, corrupt governments and rampaging greed in the form of mercantile forces prevent this food from being equitably distributed. The real problems of this world are caused by human greed, not human science.

The real fear should be that the poor and the hungry will not be the ones to benefit. The answer should be to make sure that they do. The situation is not simple. Like the drive to GMO plants, the drive here has been stolen from the scientists by the businessmen – for whom all truth is a dollar bill.

How much we and our children will have to pay in the future, so that a few greedy business men can fly around in their private jets, is a question we cannot answer. Genetically modified fish could do a lot of good for a lot of suffering people, but it will be a failure if its greatest result is be to make a few rich people even richer.

Some Facts About Generically Modified Fish

While a number of companies have produced GMO fish, the one most talked about at the moment is an Atlantic salmon developed by Aqua Bounty Technologies, Inc., which grows 4-6 times faster than the wild form

The gene that allows it to do this was taken from a Chinook salmon. So you need have no fear of what you are eating, in this case it would all be salmon.

As of March 2019, this genetically modified salmon is now approved by the FDA for human consumption.

Other examples include a carp developed in China that grows more quickly. Again, the transgenic gene comes from another species of carp. 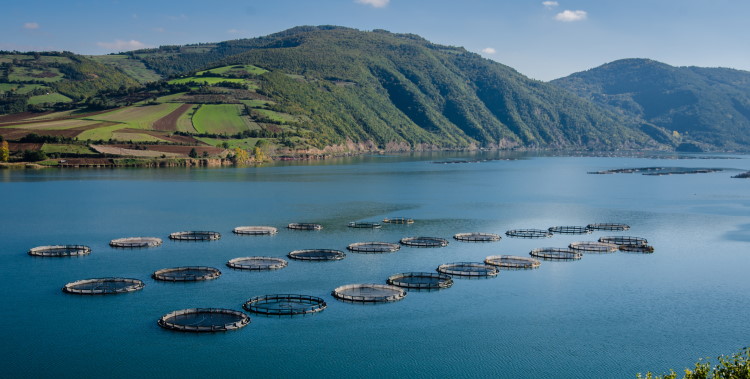 Fish farms on the Kizilirmak River

All the above examples represent improvements in nutrient usage, but this is not the only form a genetically modified fish can take.

Other research involves increased resistance to disease and greater tolerance of cold.

Finally many transgenic or genetically modified fishes have been developed in laboratories around the world to help scientists in their studies.

The now infamous luminescent zebrafish (sold as Glofish) are the only transgenic fish commercially available, as of 2004. It was originally developed in a laboratory in Singapore to be a living indicator of water pollution.

One way of making fish sterile is to make them triploid (have 3 instead of two sets of genes) and thus be sterile through genetic incompatibility. Some scientists have expressed doubts that this will be 100% effective.

Well, I hope this has been an interesting – if brief – glance into the world of GMO fishes. Perhaps now you’d like to learn about fish conservation.