Home
fish
Do Fish Have Ears And Can They Hear?
Help us spread the word...
TwitterFacebookPinterest

Sound travels further and faster in water than it does in the air – about 4.4 times as fast.

Because of this, and because visibility is greatly reduced in water, it is not surprising that sound is an important part of how fish communicate with each other and the world around them.

The seas, lakes and rivers of the world are often alive with a riot of noise – but not all of this is made by fish. Besides other organisms, there is also the noise that water makes as it moves against solid objects, or is moved by the wind. And in our modern world… the noise made by mankind and his machinery.

Many things can effect the speed of sound, including not only the nature of the medium (gas, liquid or solid) but also its temperature and any other additive substances – such as salt in water. Basically sound travels faster through denser and hotter materials. See table below.

Like us, fish produce sound in two main ways: intentionally and unintentionally. Unintentional sounds are produced by fish all the time, mostly by swimming and feeding. However they make a far greater variety of sound intentionally, in their efforts to communicate with the other creatures living in their world.

The sounds that fish make are usually simpler than the complex songs of birds, or the calls of mammals.

Scientists usually describe them as grunts, scrapes, knocks, clicks, squeaks, groans, booms, thumps, rumbles and drumming. Nearly all the species studied so far produce their sounds using either their teeth, their swim bladder or a combination of both.

Those species that produce sounds using their swim bladder usually have special muscles attached to it for exactly this purpose.

Some fish are capable of making very loud sounds. One of the noisiest fish in the oceans is the Oyster Toadfish, Opsanus tau. Because of their noisiness, Oyster Toadfishes were studied by the US Navy after they kept hearing them on their sonar. 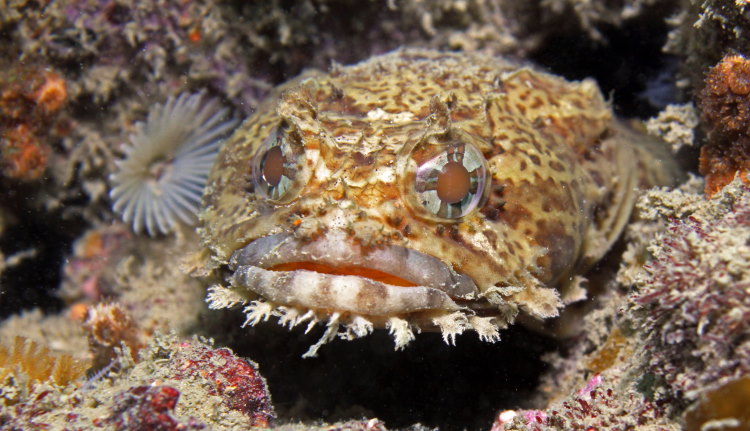 It has been claimed that measured from a distance of 60 cm, the volume of sounds produced by the Oyster Toadfish can reach 100 decibels (which is equivalent to a piece of heavy machinery).

Of course many fish try to take advantage of the sounds other species make. Thus some sharks will use sound to help them locate their prey, while some smaller fish can detect the sounds larger predators make in their hunting.

Recent research has shown that some Clupeid fish (Herrings and Shads) can detect the ultrasonic echolocation sound produced by hunting dolphins from a distance of up to 187 metres.

PinFish hear with their ears, which – although similar to ours in their basic functionality – are missing both the pinna (earlobe) and the middle ear with its eustachian tube. The inner ear, which is responsible for both hearing and balance, is located behind the eye. The modern fish’s ear consists of 3 chambers, called the ‘utriculus’, the ‘sacculus’ and the ‘lagena’.

While this is true for the Osteichthyes and the Chondrichthyes, the more ancient Lampreys have only two canals. The horizontal one is absent and the hagfish have only a single canal.

These canals, which are sometimes collectively called the Labyrinth, have a bulbous area at each end called the ampulla. These ampullae each contain the cupula. Movement of the fish’s body, in any plane, causes movement of the fluid inside the canals.

The movement of the fluid causes the cupulae to move. When the cupulae move they press against sensitive hairs, which in turn send electric impulses to the animal’s brain.

The ‘utriculus’, the ‘sacculus’ and the ‘lagena’ each contain an ‘otolith’ or ear-stone. This is normally calcareous and therefore much denser than the lymph fluid that fills the chambers or even the fish’s flesh (see fish muscle).

Movement in the lymph fluid within the chambers, caused by sound waves, causes the otolith to impact against sets of sensitive hairs within the chambers – which then also send messages to the fish’s brain. Expressed again in a slightly different way: the otoliths hang in their chamber of fluid and passing sound waves cause the molecules of the water to oscillate.

The exact movement is dependent on amplitude and wavelength of the sound waves. This movement of the water molecules causes the fish to rock back and forth in the water a little. Because the otoliths are denser than the lymph fluid, they move less and/or more slowly and thus impact on the sensitive hairs.

Quite why this should be so is a mystery waiting for a scientist to unravel it.

Do Fish Have Ears?

The basic fish ear is fairly limited in its range of use. However, many teleost fish have their inner ear connected to their swim bladder. Either directly, as in fish like herrings, or indirectly via a chain of small bones called Webarian Ossicles. This allows them to use their swim bladder as a sort of drum to detect a greater range of sounds.

In the cartilaginous fish, which have no swim bladder, this is obviously not possible. Instead they have duct, filled with endolymph, that connects the sacculus to the external environment. This duct passes through an area called the parietal fossa. This parietal fossa is covered by a layer of skin which may act as a sort of ear drum.

Nevertheless, Sharks and Rays have a relatively low hearing range. Even though they have been shown to directionally locate sources of low frequency sound pulses from up to 100 ms.

The shark’s ear also contains an organ called the Macula Neglecta, whose exact function is not known. However it is suspected that it may well respond to movements in lymph fluid caused by sound waves contacting the skin that covers the parietal fossae.

Fish can hear a wide range of sounds, however there is a great variety of capabilities between species. The data in the table below has been collected from a number of papers and serves well to demonstrate great variability in hearing potential within the world of fish.

Well, I hope this article has cleared up the mysteries of fish ears for you!

Perhaps now you’d like to know more about fish nostrils.