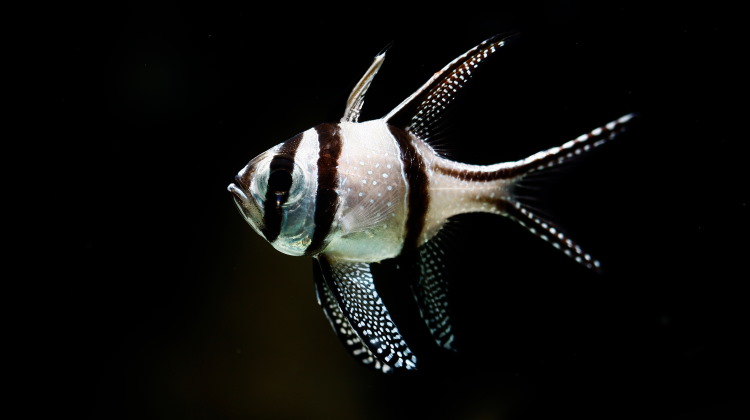 The possession of light producing organs is quite common in fish. Particularly, but not only, in those species that live in deeper waters.

45% of fish that live at depths below 300 metres and 75% of all Bathypelagic fish have some light emitting organs.

Although many groups of organisms (fish, insects, molluscs, etc.) possess bioluminescent organs, they are all normally dependent on bacteria that is maintained in special cells, for the production of the light.

However, some fish do produce a chemical that reacts with water to produce light.

The bacterial light is usually produced as a result of an enzyme (often luciferase) mediated oxidation reaction, in which a molecule (often luciferan) changes its shape and emits a single photon of light in the process.

Luciferan is a large, complex molecule that can later be returned to its original shape through a reduction reaction. During which, it gains an amount of energy equivalent to the single photon of light it emitted earlier.

Because the essential reaction is an oxidation reaction, the host organism (in this case the fish) can control the amount of light emitted, by controlling the blood flow – and hence the oxygen supply to the cells containing the bacteria.

The light glands of different fish species show quite a wide variety in complexity.

The simplest are just a few cells embedded in the skin. More complex systems involve a reflecting layer behind the light source (black or silver), the light producing gland, a color filter and a lens.

In some species, the lens is derived from a modified fish scale.

Most of the species that possess light organs are pelagic. Some exceptions to this can be found in the benthic Macrouridae (Rat-tail fish).

How Do Fish Use Bioluminescent Light?

Many species of bioluminescent fish have lights on the lower parts of their bodies. Scientists believe they use these lights to prevent their bodies becoming silhouetted against the surface.

A fish looking up from below, will see the body of the fish above it against the haze of light that is the surface. By having lights on their underside, fish can break up the pattern of their body and effectively hide in the haze.

Lights along the sides of the body are more likely to be for communicating with other members of their own species – either whilst shoaling, or to attract potential mates.

In other bioluminescent fish, such as the well known Angler Fish, the light organs seem designed to attract prey. Nearly all angler Fish possess luminous baits. The same applies to other types of fish with lights near their jaws or at the ends of fins or barbels.

Malacocephalus laevis has light producing bacteria in a gland near its anus. When it is disturbed, it can eject some of these bacteria into the water through its anus. The sudden appearance of this luminescent mass would easily disorientate a predator.

It is possible that fish with lights distant from the centre of their body – such as on or near their tail – may use these lights to disorientate predators.

Of course it is highly likely that fish use their light organs for more than one purpose.

It is often difficult to unwind time and discern whether or not an adaptation had a single primary cause.

Some bioluminescent fish can actually produce a beam of light and such a beam would obviously help them find prey.

Many bathypelagic fish with light producing organs also have additional light organs that shine into their own eyes.  Scientists believe that this may work to accustom their eyes to a certain level of light, so that when they turn on their main lights they do not blind themselves.

Most luminous fish are teleosts, but there are some luminous sharks as well. For example Euprotomicrus bispinatus, which is also the smallest shark in the world.

Some more examples of bioluminescent fish are: