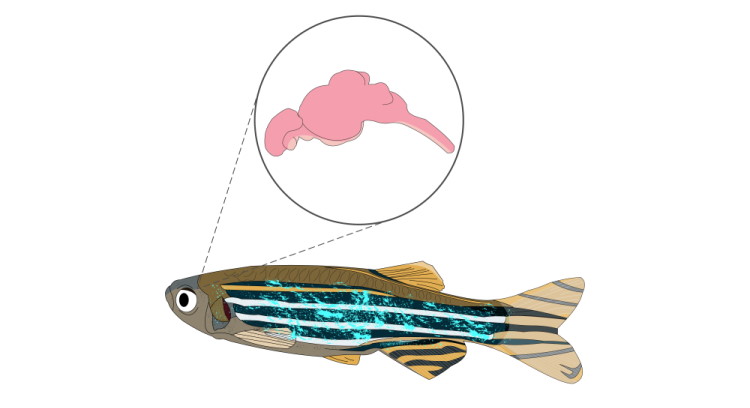 The Brain and Nervous System of Fish

Being highly complex life forms, fish need a brain and a nervous system to control their body’s actions.

The nervous system of fish (much like ours) is composed of a central co-ordinating brain, a spinal cord and many, many nerves.

Generally speaking, fish have small brains in relationship to their overall body weight.

Elasmobranchs (Sharks and Rays) in general have a slightly larger brain for the same body mass as Teleosts (Bony Fish). However there is great variety within the teleosts. Scientists have learned something quite surprising about the Elephantnose Fish (Gnathonemus petersii).

Lurking in the vegetation and then aggressively attacking anything small that comes near doesn’t seem to require much intelligence.

A Pike (Essox lucius) has a brain that amounts to only 0.077 percent of its total body mass. Which means that when you catch a 5 kilogram Pike, you have out maneuvered a fish with a brain weighing 3.85 grams – or one seventh of an ounce.

In comparison, a Burbot (Lota lota) is a little smarter because it has a brain that is 0.13 percent of its body weight. Meaning a 5 kilo specimen would have a 6.5 gram brain, still its is a pretty dumb fish. Most fish have brains that are less than 1 percent of their body weight, but not all.

At the other end of the continuum of fish intelligence is the electric Elephantnose fish. With a brain that is 3.1 percent of its body weight, it is a lot smarter than the Pike. If it grew to weigh 5 kilos, its brain would weigh 155 grams. Which would make it 40 times as large as that of a Pike of similar weight.

To look at it another way, a human being has (on average) a brain that weighs in at around 2.3 percent of body weight. A five kilo human would have a brain of only 115 grams, which is smaller than that of the Elephantnose Fish.

Does this mean Elephantnose fish are smarter than people?

No. Intelligence is more than just brain mass, or even brain to body ratio. While large brains do make it easier to be smart, it is the complexity of the brain and the relative proportion of forebrain that are most important.

The most complex and most forebrain dominated brains on this planet belong to dolphins and humans. Nevertheless we can see that some fish are much smarter than others – and the Elephantnose fish is known among aquarists as the most playful and inquisitive of fish.

The brains of cyclostomes (Hagfish and Lampreys) are simple, but specifically evolved to suit their lifestyles. For instance the optic lobe is well developed in the visually oriented Lampreys, but indiscernible in the blind Hagfish.

The medulla controls the operations of the inner organs such as heart rate (see fish heart), blood pressure, digestion (see fish stomach) and waste disposal. It is also a relay centre for many nerves sending messages to and from the mid and/or forebrain.

The cerebellum controls motor co-ordination (but it does not initiate motor activities). This means it controls the timing and interaction of muscles once a muscular action has been initiated. The cerebellum is also important in maintaining equilibrium.

The mid-brain of a fish consists mostly of the optic lobes, which vary greatly in size between species in accordance with their dependance on sight. In some species the optic lobes may be so large they completely cover the forebrain.

The forebrain of fish is dominated by the olfactory lobes (see fish olfactory system) which extend forwards and may be placed at the end of stalks. These olfactory lobes are large in the cyclostomes and very large in the elasmobranchs, reflecting the importance of smell to these to groups of fish. The teleosts, for whom sight is often the most important sense, have smaller olfactory lobes.

In many elasmobranchs and some teleosts, there exists a cerebrum or pair of cerebral hemispheres. These also seem to be predominantly involved with the sense of smell (in mammals the cerebrum is much larger and involved in planning and learning). The pituitary also arises out of the forebrain, it plays and important role in the regulation of metabolism.

A fish’s brain never completely fills the cranium, the cavity in the skull where it lies protected. The remaining space is filled up with a gelatinous material.

Finally, as in all vertebrates, the brain (plus the gel) are surrounded by a membrane that helps keep foreign matter and micro-organisms from contacting this most important organ.

The spinal cord, or nerve cord, is similar in all fish.

It is a thick sheath of nervous material that runs from the base of the brain, back along the fish’s body through – and protected by – the neural canal of the spinal column.

Normally it extends the full length of the fish’s body, but a notable exception to this is the giant Sunfish (Mola mola) wherein the spinal cord is actually shorter than the brain. It serves as the basis of many simple responses and as the major link to the brain for sensory input and brain-mediated responses.

Apart from the brain and the spinal cord, the fish body is supplied with a vast network of nerves: the electric wires of the body along which messages travel.

Normally there is one pair of spinal nerves (left and right) for each vertebrae. Thus long thin fish with many vertebrae such as eels will have many more pairs of spinal nerves than a much shorter fish such as a gobi. In fish there are 10 pairs of cranial nerves all with well defined roles.

We have a lot more articles on fish anatomy here on the Earthlife Web – if you are interested you can find them here.