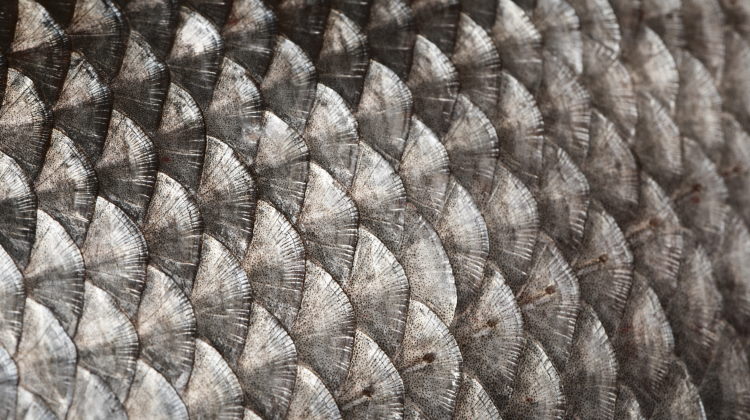 If you have ever been to a fish market, or caught your own fish, you will be aware that fish have scales.

Fish scales are the small, almost plastic, flakes that cover their body. Most fish have scales, but not all. Scales effect the fish’s life through their cost of manufacture, restrictions they impose on body movement and through the protection they supply.

The Cyclostomes (Hagfishes and Lampreys) have no scales at all. However the fossil evidence suggests that their distant ancestors did have some.

Scales evolved separately in the cartilaginous fish and in bony fish. The scales of sharks and rays are made of bone and resemble teeth – in that they have a soft central area called the pulp, a middle layer of dentine and a hard outer layer of enamel. These scales are called denticles and are described as ‘Placoid Scales’, they protrude through the epidermis and are not wholly covered by it.

Such scales have a definite size and do not grow along with the animal. Instead, when the animal’s growth opens up a large enough space between two or more denticles, a new one grows to fill the space. The scales/denticles of cartilaginous fish are discrete – they do not overlap as do the scales of bony fishes.

The images above show that part of the scale which is embedded in the skin of the fish as coloured orange, (however in reality it is not coloured like this) and the part we see as coloured grey. Apart from the placoid scales of sharks and rays, fish scales are mostly flat and thin. They fit into flat envelopes in the skin so there is no need of a side view, as is shown in the placoid image above.

Do Sharks Have Scales?

Most sharks have a complete covering of denticles, arranged in a repeating diamond sort of pattern. Sharks also have a thick fibrous dermis (that part of the skin which is below the epidermis) which supports the scales and helps protect the animal.

Other cartilaginous fish that swim like sharks, such as the Guitar-fish (Rhinobatidae) and the Saw-fish (Pristidae) also have a complete covering of denticles.

However, those species that are dorso-ventrally flattened – such as the rays – tend to have many fewer denticles. In the Skates (Rajidae) they are scattered in patches across the pectorals and on the head. In the Eagle Rays (Myliobatidae) they are very few in number and in the Electric Rays (Torpedinidae) they are absent, except in the modified form of the tail spines. The Devil-fishes (Mobulidae) have none at all.

The scales of bony fishes evolved a long time ago…

In their ancient form, they had four layers. One of dense bone, one of spongy bone, one of dentine and one of enamel. Such scales are called ‘Cosmoid Scales’ and they only exist in the modern world on the Ceolocanth (Latimeria chalumnae), or as fossils.

The scales of the remaining bony fishes have only two layers, a calcified one and a fibrous one. They come in two main types ‘Ganoid Scales’ and ‘Elasmoid Scales’.

Ganoid scales are derived from Cosmoid scales and are the evolutionary older style. They are found on Bichirs, Gar-fish, Sturgeons and Reedfish.

They are hard solid scales.

The most common form of fish scale is the elasmoid scale. It is the thin plate that you find on most fishes. It is often described as coming in two forms: ‘Ctenoid’, which have a set of fine teeth along the posterior edge and ‘Cycloid’, which are simply rounded on the outer/posterior edge.

However there are intermediate forms and these two terms are really just adjectives that represent the extremes of a continuum.

Do All Fish Have Scales?

Not all fish have scales, some species such the Sun-fish (Mola mola) and the Siluroidei (Naked Catfish) have none at all. Other species, like the Common Eel appear to have no scales, but they really have microscopic scales deeply embedded in their dermis. Even in those fish that have scales, they do not always cover the whole body.

The size and distribution of scales over a fish’s body often, but not always, reflect the way it lives.

In some S. American Catfishes, the scales have become modified into bony plates to make armour. This is also the case in Sea horses and Pipe fish. In these cases the added protection is paid for by reduced flexibility and speed. The scales of some fish decrease in size from the head towards the tail (Carp and Herring), reflecting the need for greater flexibility towards the tail of the fish.

While the scales of Tunny (Thunnus sp.) and Mackeral (Scomber sp.) are very small, and those of the Common (Atlantic) Eel (Anguilla anguilla) are microscopic, other species of fish have very large scales. The Tarpon (Megalops sp.) has large scales often reaching 5cm (2 inches) in diametre, which are sometimes made into ornaments. And the scales of the Mahseer (Borbus sp.) of India can exceed 7cm (3 inches) in diametre.

The scales of modern fish are embedded in (and grow out of) the dermis and are covered entirely by the epidermis. They grow as the fish grow – thus, in many cases, they reflect a history of the fish’s life.

Experts in scale patterns can not only tell you how old a fish is from its scales, but also how many times it has spawned and if it has been seriously ill.

Mostly a fish’s scales lie shallowly in the dermis and are overlapping like the tiles on a roof, making them easily removed (Herring Pilchard and Sardines for instance). But in other species, such as Plaice, they are more deeply embedded and do not overlap.

In other fish, some (as in the Flounder, Platichthys flesus) or all (as in the Diamond Flounder, P. stellatus) are modified into bony tubercles. Many other fish also have tubercles, such as Turbot and Black Sea Turbot (Scophthalmus spp.).

In other species of fish, some of the scales have become modified into shields to protect the lateral line or into spines. In Surgeon-fish and their allies (Teuthidae) these spines can be razor sharp. The moveable spines of Porcupine-fishes (Diodontidae) and Puffers (Tetraodontidae) are also modified scales.

Well, I hope this explanation to the humble, yet deeply fascinating fish scale has been useful!