Unlike mammals, the gender or sex of an individual fish is not always fixed from birth.

Gender change is considered a form of hermaphrodism (as mentioned on the page on fish reproduction).

The change is normally triggered by environmental cues, specifically as a response to the gender of other nearby members of their own species.

Most species that undergo gender change live in small schools that are all of one gender, except for a single dominant individual – but not all. Anenome fish live as monogamous pairs and in some Gobies the sex ratio is normally 1:1 also.

The gender change can be from male to female, or from female to male – depending on species.

In Parrotfish and in some Wrasses, the males and females have very different coloration. So much so, that in some cases they were originally described as separate species. Such a species is called dichromatic. Thus in these species, the change of gender involves not only an internal metamorphosis of the gonads and a rapid increase in size, but also a change of colour. 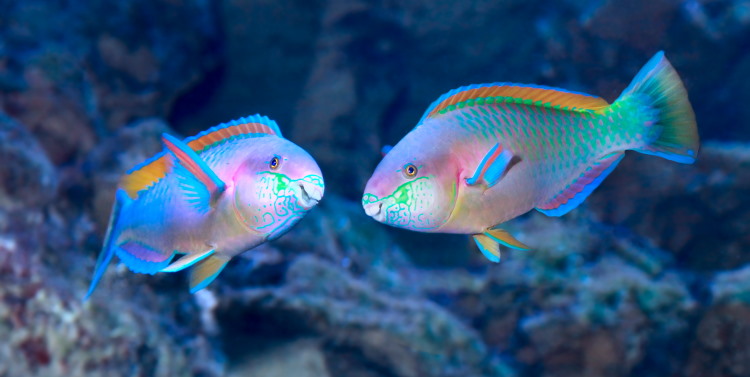 When the dominant male is spawning with a female, they approach slowly… using their female appearance to appease the dominant male’s anger – and then quickly release their sperm at the same time as the female releases her eggs!

Such a male can undergo a size and coloration change to become a dominant male if the opportunity arises.

Not all sexually labile fish species live as harem groups. In some Anenome fish, individuals have the option of a gender change and all juveniles are male – but they normally live in monogamous pairs. However, if the larger female of a pair dies, then a juvenile (all juveniles are male) will quickly move in with the resident male (who immediately changes gender to become a female, thus forming a new pair).

Well, I hope this has been a enjoyable introduction to how sex change in fish works – and that you have learned about the meaning of the terms Protandrous and Protogynous.

Perhaps now you’d like to learn about how fish learn.