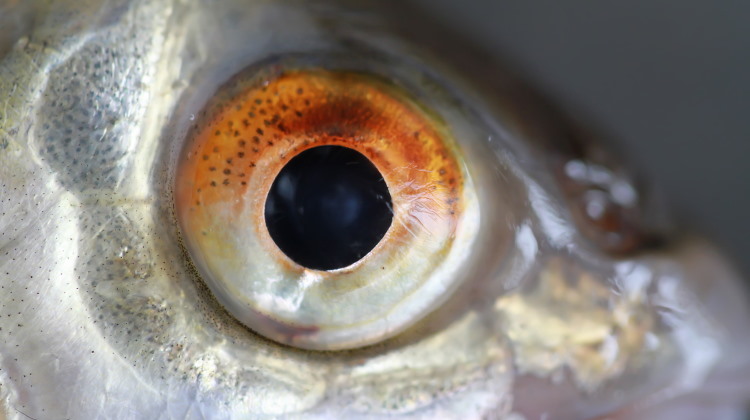 Basically, water absorbs light. This means that the further a ray of light travels through water, the weaker or more attenuated it becomes.

While we who live in the air can often see for several kilometres – sometimes even more than 20 km – a fish is lucky if it can see for 50 metres… and generally it can see for far less than this.

In muddy, algified or turbulent water visibility can often be measured in mere centimetres. Furthermore, because water absorbs light, the amount of light available for fish vision steadily decreases the deeper you go.

At depths of between 150 and 750 metres even the clearest water becomes a twilight zone. And below 1,000 metres you are in the realm of constant night. Nevertheless many fish live some (or all) of their lives at much greater depths than this.

As you know, visible light is composed of a range of wavelengths. With violet being the shortest and red being the longest. Water absorbs the red end of the spectrum more easily than the blue end. At a depth of only 1 metre, 25% of the red light entering the water has already been absorbed.

What this means in practice is that the deeper you go, the less color you can see – and below 100 metres there is no real color vision at all.

Most Teleost fish, however, have color vision. The eyes of the Trout (Onkorhynchus mykiss) have three sensitivity peaks at 455, 530 and 625 nanometres.

It should be no surprise then that sight is often far less important to many fish – as a means of perceiving the world around them – than sound, touch, taste (chemistry) and the lateral line system.

Despite all this, most fish have good eyes. The exception to this rule being the Hagfish, in whom the eyes are vestigial.

Fish eyes are in fact very similar to our own and those of other vertebrates. The main differences being:

The basic teleost eye (see anatomy diagram above) like all vertebrate eyes, consists of an outer case called the sclera, which is only transparent in front of the lens (when it is called the ‘cornea’). The cornea has a constant thickness, unlike ours which is faintly lens-shaped. Hence it does not refract (change the path of) light rays passing through it.

On the inside, the ‘sclera’ lies on another layer of tissue called the ‘coroid’ layer. Inside this, there is the 3rd layer which is the light sensitive part of the eye – called the retina.

The iris of the fish’s eye is normally immovable in Teleosts and very slowly moveable in Elasmobranchs (sharks and rays).

It takes about one hour to change from its most open to its most closed. In comparison the iris of mammals can open or close in a matter of minutes.

The lens of a fish’s eye is purely spherical, unlike ours. It has a refractive index (light bending ability) of 1.65; this is higher than that of any other group of vertebrates. Furthermore the lens is fixed in its shape, meaning its shape cannot be adjusted to facilitate focusing on nearer or more distant objects.

When a mammal wants to change the focus of its eye from a nearby object to a distant one, it uses special muscles to change the shape of the lens. Thus changing the part of the light entering the eye which will be land perfectly on the retina. Because the lens of a fish’s eye is fixed in shape, it cannot do this. So instead, it moves the lens backwards or forwards.

An interesting aspect of the design of the fish’s eye – and its placement on the side of the fish’s head – is that it is bifocal.

Also, because the lens is spherical, it tends to protrude through the iris. This combined with the whole eye tending to protrude from the fish’s head and the normal sinuous nature of a fish’s movement, means that fish often have pretty good all round vision.

Whilst most fish eyes are placed on the upper side of their heads, some interesting variations have evolved.

A deep sea fish called Opisthoproctus soleatus has telescopic eyes that are placed on its head, so that they look straight up towards the sky. The Mud Skippers, Periopthalmus sp., have their eyes placed on prominent turrets allowing good all round vision. When they are out on the mud they can also withdraw their eyes into the turret to clean and lubricate them.

In the young of Idiacanthus fasciola, the eyes are found on the end of stalks projecting from the upper sides of the head. Finally, many of the deepest living fish and those that live deep in caves have very small and often non-functional eyes.

The retina of the fish’s eye is made up of ‘rods’ and ‘cones’. The rods detect only the presence or absence of light and the cones detect colour. As I said above, most fish, except for sharks and rays can detect colour. Rods are much more common than cones, and usually there are 4 or 5 rods for every nerve cell. Whereas cones normally have only one per nerve.

The ratio of rods to cones is very variable between species, but as a general rule, the deeper a fish lives the less cones it has.

Within the cones, the light sensitive chemicals (the ones that actually catch the light and convert it into an electrical impulse) are called Rhodopsins in fresh water fish and Porphyropsins in marine fish. However, fish that live below 500 metres often Chrysopsins instead – as these chemicals are particularly sensitive to the blue end of the light spectrum.

Many Teleosts and most Elasmobranchs possess a ‘Tapetum lucidum’, a layer of reflective material at the back of the eye that sends light back passed the rods and cones.

In Elasmobranchs, the tapetum lucidum is found in the choroid layer of the eye and is composed of guanine crystals. In Teleosts the tapetum lucidum is located in the retina (behind the rods and cones) and is either composed of a) guanine crystals as in Bream (Abramis brama) and Anchovy (Anchoa mitchilli), or b) a melanoid lipid as in Garfish (Lepisos teidae) and Catfish (Siluridae).

In some fish, other parts of the body may be sensitive to light. In Scyliorhinus species, some other juvenile fish and in some sharks the ‘Pineal Gland’ (in the centre of the forehead) is light sensitive. Larval Sea Lampreys have light sensitive cells in their skin and even in their tail.

Some fish, such as Rainbow Trout and Goldfish – and possibly many others – can detect UV light.

Monocular vs Binocular Vision In Fish

Many fish – even when unmoving – have a greater monocular field of vision than man, but much less binocular vision.

Visual Range in Men and Fish

Some deep water fish eyes are very large, with large lenses focusing on small retinas. This greatly increases the eyes sensitivity to light. In Myctophium rissoi, the diametre of the the anterior part of the eye is equal to 50% the length of the head of the fish.

Well, I hope this has been an interesting explanation of the sight and visual system in fish.

Perhaps now you’d like to learn more about fish anatomy.