Home
insects
Terrestrial Amphipods 101: The World Of The “Sand Hoppers”
Help us spread the word...
TwitterFacebookPinterest

The Amphipoda (Latrielle 1816) are an order of the subphylum Crustacea, phylum Arthropoda.

They can be found in the Class Malacostrata in most modern taxonomic schemes, even those in which the group Crustacea is treated as a phylum.

The word Amphipoda comes from two ancient Greek words: Amphi or Amphis mean ‘on both sides’ and Poda meaning ‘feet or legs’.

Amphipods in general are laterally compressed, meaning they are a bit flattened from side to side. In effect they look a bit different to most other crustaceans, which are either dorso-ventrally compressed (flattened top to bottom), or simply cylindrical.

Most Amphipods are aquatic and will be dealt with in the section on Crustacea in the Invertebrates chapter. This small section is here because terrestrail amphipods are often confused with Insects.

Terrestrail Amphipods are found in the family Talitridae. Those that occur in gardens and forests are often called Land Hoppers or Lawn Shrimps.

Although aquatic amphipods are often white, terrestrial species are more often a pale beige or cream colour. However, like their relatives the prawns, they turn red when dead.

Although they live terrestrially, these amphipods are still heavily dependent on moisture and can only survive in damp places. In some parts of the world they are an important part of the leaflitter community. For instance there are 15 known species of Land Hoppers from Tasmania Australia. 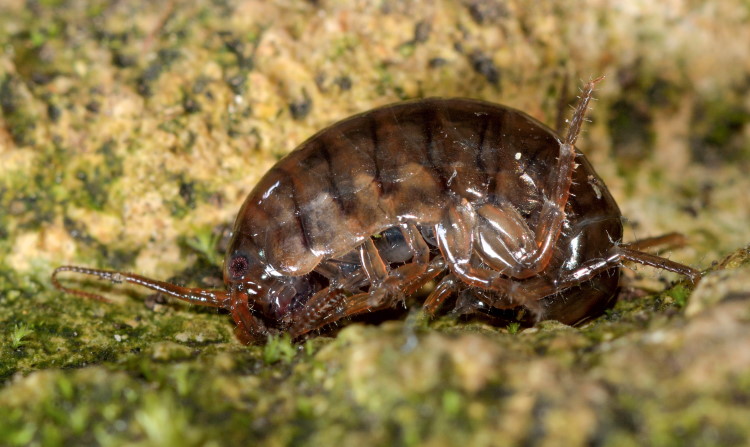 In some cases terrestrial amphipods can become an invasive species. The Australasian species Arcitalitrus dorrieni is now a common invader in the damper habitats of much of the warmer parts of Europe.

During mating, the female extrudes her eggs into a brood pouch on the underside of her body as the male fertilises them. Mating can last for more than an hour or more and pairs are often to be found linked together ‘in copula’.

After mating the eggs are carried by the female, although they are not attached to her body as in many other Malacostra. They hatch in one to three weeks depending on species and temperature. The young undergo their full nymphal development within the egg (unlike most crustaceans). This is a habit that has assisted their adaption to terrestrial habitats; the young look like small versions of the adult and, in some species at least, take a year to reach maturity.