The insect abdomen contains the digestive system and reproductive organs. It consists of eleven segments in most orders of insects, though the 11th segment is absent in the adult of most the higher orders.

PinIn many of the Hymenoptera, and several other orders, the number of abdominal segments is reduced and in the Honey Bee only seven segments are visible. In the ‘Collembola’ (Springtails) the abdomen has only six segments. In the Hymenoptera there is a constriction where the 1st and 2nd abdominal segments meet. This is called the ‘waste’, and the remaining portion of the abdomen is called the ‘gaster’.

Unlike other Arthropods, the insects possess no legs on the abdomen in the adult form – though the ‘Protura‘ do have rudimentary leg-like appendages on the first three abdominal segments.

Many larval insects, particularly the ‘Lepidoptera‘ and the ‘Symphyta’ (Sawflies), have appendages called ‘pseudo’ or prolegs on their posterior abdominal segments. As well as their more familiar thoracic legs, these allow them to grip onto the edges of plant leaves as they walk around.

Do Insects Have Muscles? 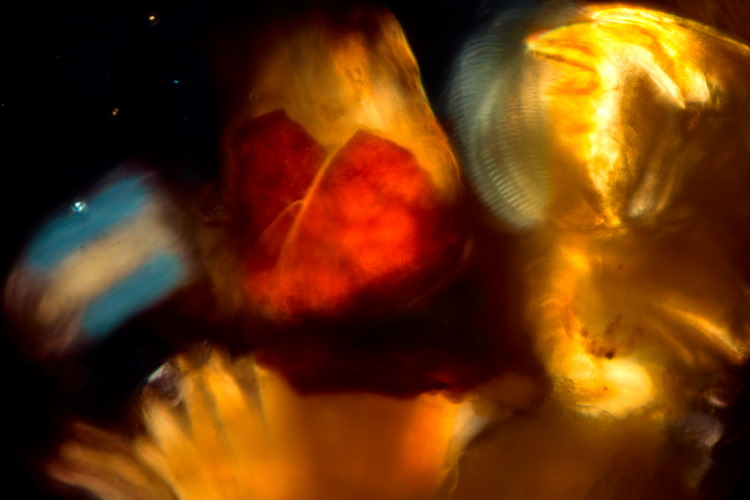 Muscle tissue from a tent caterpillar, Malacosoma americanum. Micrograph at 100x with polarization.

The inside of an insect’s exoskeleton has special contours and bits and bobs on it, which project inwards and allow for muscles to be attached and to help give them leverage – these projections are called ‘apodemes’.

The musculature of even the smallest insect can be as complicated as our own and makes for a fascinating study of design in miniature. The muscles of insects are generally light grey or translucent, unlike ours which appear red. This is because insects lack both the blood system that we have and the haemoglobin that makes our blood – and hence our muscles – red.

The hemolymph (blood) of insects flows freely around the inside of their bodies.

An insect’s hemolymph is not responsible for the transmission of oxygen to its cells (this is the job of the Trachaea)  and therefore does not contain haemoglobin, so is not red. Normally it is a watery green colour, though it is pigmented (coloured) in some species. 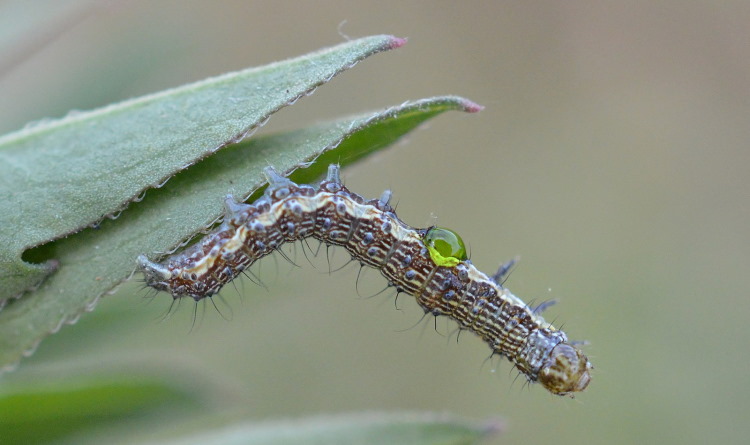 This hemolymph is a sort of soup, rich in nutrients, that flows around the inside of the insect body allowing the various organs to get whatever resources they need – and into which they dump their waste products.

These waste products are later removed from the hemolymph by the Malpighian tubules.

Because insects do not have veins and arteries like us and the rest of the vertebrates (they do not need to), they do not have a complicated heart like ours either.

The insect heart it is basically a tube, sealed at one end, which runs along their back. It beats regularly, thus swishing the blood in and out – and around – the body. In some cases it has inlets, with one way valves, and in others it has outlets as well.

The Aorta is simple, a tube that runs from the heart towards the brain; it is open at the end near the brain. You can get some idea of how the heart of an insect works by cutting the nozzle off the top of an empty washing-up-liquid bottle and taking it into the bath with you. Hold it under the water and squeeze it a few times and watch how the water swirls around.

The Digestive system of an insect is usually a long straight tube, running from the mouth to the anus. It is often divided into the ‘fore gut’, the ‘mid gut’ and the ‘hind gut’.

Immediately behind the mouth are the Salivary Glands. In most species these secrete saliva, generally a watery fluid that lubricates the food and contains a few enzymes to begin the processes of digestion. However in some carnivorous insects, the saliva is composed entirely of digestive enzymes. This applies particularly to those with external digestion of the food.

In other insects, the salivary glands have become modified for purposes that have nothing to do with digestion. In Lepidopteran caterpillars and Caddisfly larvae, they have been converted to the production of silk. While in the Queen Honey Bee they are called the mandibular glands and secrete hormones.

The fore gut is generally considered to consist of four sections: the Pharynx, the Oesophagus, the Crop and the Proventriculus. It is also known as the Stomodaeum.

The pharynx is the first part of the fore gut and, apart from being a tube that connects the interior of the mouth area (sometimes known as the Buccal Cavity) with the more inward parts of the gut, it sometimes serves as a pump to suck up the liquefied food of those insects which feed by means of external digestion.

The Oesophagus is basically a tube leading to the mid gut via the crop and the proventriculus or gizzard. The crop is simply a storage area and the proventriculus, or gizzard, is a muscular extension of the crop. In those insects which feed on solid foods, it is used to grind the food up into smaller particles. It can also serve as a filter to keep oversized particles out of the main digestive tract – and as a valve controlling the flow of food into the midgut. The fore gut and the mid gut are separated by the ‘stomodeal or cardiac valve’.

The midgut (called the Mesenteron in some books) runs from the ‘gastric caeca’, a series of stubby pointed tubes leading off from the stomach, to just before the Malpighian tubules, a series of long thin tubes. In between the two of these is the stomach, or ventriculus, which is the area of most active digestion.

The mid gut is lined by a semipermeable membrane composed of protein and chitin. Like the cuticle, which allows the passage of liquids and dissolved substances to the midgut wall while preventing the passage of solid food particles, it is continually worn away by the passage of food through the gut and replaced by the epithelial cells of the mid gut wall. The mid gut and the hindgut are separated by the ‘proctodeal valve’.

From the mid gut, food passes to the hind gut (called the Proctodaeum in some books). The hind gut comprises the ‘intestines’ which is where much of the diffusion into the the insects body occurs. The ‘rectum’ which compresses the undigested food and waste products, extracts more water from this if necessary, before it is passed out through the ‘anus’ as faeces.

Arising from – and the foremost part of – the hind gut are the Malpighian tubules (named after Malpighi who discovered them), which are not really to do with digestion at all but with elimination. They act like our kidneys and extract metabolic waste products (mostly nitrogenous ones such as urea and uric acid) from the circulating body fluid called the haemolymph and excrete them into the intestines, which is the first part of the hind gut.

Though insects possess a large number of digestive enzymes, they are often helped by the presence of symbiotic micro-organisms. Such as protozoa (in the case of the termites and some primitive cockroaches which feed on wood) and bacteria – in the wax moth Galleria mellonella, which feeds on the wax that honey bees Apis mellifera uses to make the combs in its hives.

Most insect species are bisexual, i.e. there are males and females in most species. These often look very different and have even been mistaken for different species in the past. Some species are capable of reproduction without males; the eggs are unfertilised but develop and hatch into nymphs or larvae that are always female themselves. This is called ‘parthenogenesis’.

Externally the sexual organs, called genitalia, of a female insect generally consist of an ‘ovipositor’ which is often encased in a pair of filaments called a ‘sheath’ and is which is used to by the female to put her eggs where she wants.

Its form vary greatly throughout the Insecta (i.e. the whole order of insects). The ovipositor of the Diptera (True Flies) is functionally similar (i.e. it is used to lay eggs), but is morphologically distinct (i.e. it arises, or is made, from different parts of the insect’s anatomy and should be called a ‘pseudovipositor’). 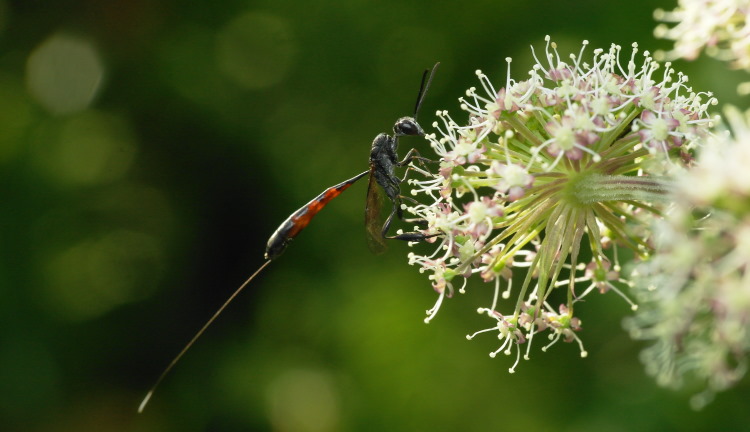 Hymenopteran insect Gasteuruptsion, which has a long ovipositor

The median part of the oviduct which receives the aedeagus during mating is called the ‘vagina’.

There are also various tubes, down which the ova travel on their way from the ovaries to the outside world. Fertilisation occurs in the common oviduct after the the egg has received its shell or the ‘chorion’. To facilitate this the shell contains a very small opening at one end called the micropyle, which allows the sperm to enter.

As well as tubes, there are several important glands some of which (spermathecal glands) allow the female to keep the sperm alive and viable for a long time. As much as 20 years in some social insects (Ants and Bees); and some of which (collaterial glands) secrete the substances which allow the female to stick the eggs where she wants them to stay i.e. underneath a leaf, or to protect the eggs – as in the ootheca produced by the Cockroaches and Mantids

Internally, the male reproductive organs consist of a pair of ‘testes’ containing: the ‘testicular follicles’, where the spermatozoa are made; the ‘vas deferens’, which is the tube down which the sperm travels; a ‘seminal vesicle’, which is where the sperm is stored prior to mating; and accessory glands, which supply seminal fluid for additional volume and to nourish the sperm before (and during) their journey.

Well, I hope this has been an interesting look at the insect abdomen and the many systems that lay between its surface!

While you’re here, make sure you check out insect wings and insect mouthparts.