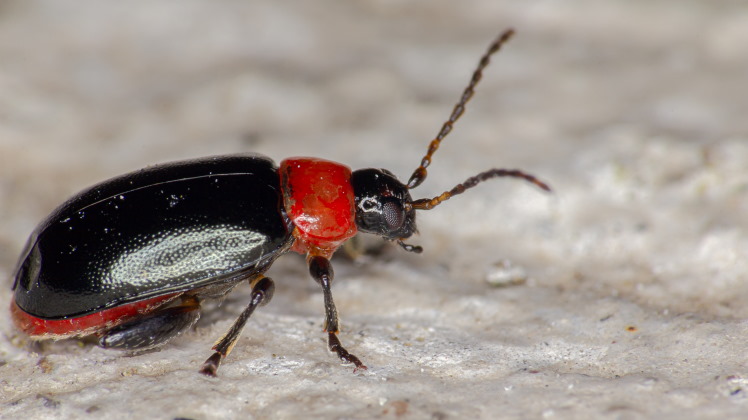 The thorax is the main engine room of the insect. It, like the insect abdomen, is built up of a series of concave upper and convex lower integumental plates. In the Thorax, they are known as the ‘Nota’ (singular ‘notum’) and ‘Pleura’ (singular ‘pleuron’), the whole being held together by a tough yet stretchable membrane.

The insect thorax can be conveniently divided into three separate and normally easily visible sections called (from the front), the ‘prothorax’ the ‘mesothorax’ and the ‘metathorax’.

This leads to the nota and pleura being named ‘Pronotum’, ‘Mesonotum’, ‘Metanotum’ and ‘Propleuron’, ‘Mesopleuron’ and ‘Metapleuron’. Within the whole class insecta, the form and shape of the thorax shows considerable variation – depending on the needs of each species.

In species that are strong fliers, for example, the Mesothorax may become greatly enlarged.

In the adult insects, as well as in the nymphs of those insects with an ‘incomplete metamorphosis’ (those whose life cycle lacks the production of a pupa), each of these sections supports a pair of legs. In the pterygote (winged) insect orders, the first two sections support a pair of wings – except in the Diptera (true flies) where the second or hind wings have become modified into a pair of club-like balancing organs called ‘halteres’.

The typical insect leg, as shown above, consists of six main sections:

Between the claws may be found a special pad known as an ‘arolium’ and which acts using suction developed by large numbers of minute tubular hairs to help hold the insect to smooth substrates.

As in all aspects of insect anatomy, there is an amazing diversity of form to be found in the insect leg. The three examples shown below are colour coded to the same pattern as the labled leg above. Can you remember which part is which?

In many small insects, the veins may be absent and in some very small insects (such as the Thrips, which are only one or two millimetres long) the wings consist of a central midrib supporting a series of fine hairs – these look more like feathers.

Wings are not totally stiff but bend and flex in an amazing manner during flight, greatly improving their aerodynamics.

Most species of winged insect have two pairs of wings and – in many of the more advanced orders – these two wings are held together by a variety of mechanisms to form a single, larger, functional wing.

Insect wings are soft and shapeless when the adults first emerge, but are immediately inflated with blood pressure through the veins before they harden and darken as a result of coming into contact with the air.

Though most insect wings appear bare to the naked eye, many are dotted with minute hairs. In some cases such as the ‘Trichoptera’ (Caddisfly) they are completely clothed in fine hairs, or as in the ‘Lepidoptera‘ (Moths and Butterflies) completely covered in tiny scales.

Though insect wings are primarily concerned with flight, they serve a number of purposes. In the ‘Coleoptera‘ (Beetles) and some ‘Hemiptera‘ (True Bugs) the fore wings have become highly sclerotized and act as armour, protecting the insect concerned. While some very small parasitic ‘Hymenoptera‘ use their wings to swim through the water to their hosts.

The bright colours of many insect wings are there for mating purposes and allow males and females to recognise each other.

In others, the colours perform a role in camouflage, hiding the insect from its predators.

In yet others, they perform a thermodynamic role: the different colours reflecting and absorbing different wave lengths of light, allowing the insect to control its internal temperature. In some insects the wings may perform two or more of these functions simultaneously.

In two orders of insects, one pair of wings has become completely reduced to small balancing organs and they provide no power of lift during flight at all. The most common of these are the Flies (House Flies, Dung Flies etc.), which have the hind wing reduced. Much less commonly seen, but just as interesting, are the Stylops which have the forewing reduced.

Well, I hope this has been an illuminating look into the anatomy of the insect thorax and the legs and wings attached to it!

Perhaps now you’d like to learn a little about insect eyes.