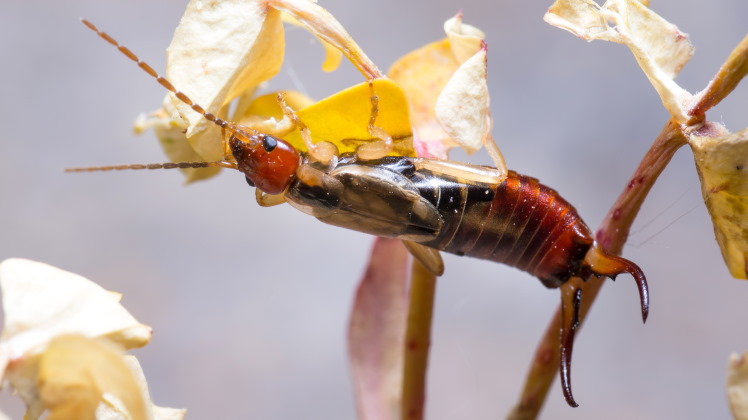 Dermaptera (earwigs) are a relatively common, if little known, insect typified by Forficula auricularia – the common European Earwig. Which can now be found in most temperate and many tropical countries, due to its fondness for potted plants as a home.

The name ‘Earwig’ is possibly a misinterpretation of ‘Earwing’ a reference to the small tegmina (hardened forewings). If this is true, it may well be partially responsible for the mistaken belief that they will crawl into a sleeping person’s ear and then burrow into their brain, thus killing them.

There are around 1,200 species of which the rare (if not extinct) Labidura herculeana from St Helena is the largest at around 8 cm long.

Dermaptera are hemimetabolous (i.e. the larval forms look like small adults except for the lack of wings) and have about 4-5 larval instars. They have biting/chewing mouthparts, very reduced forewings (Tegmina) and much folded hindwings which are hidden beneath the reduced forewings or else no wings at all.

The antennae are filiform (long and thin) with 10 to 50 segments and the compound eyes are well developed, except in the Arexeniina, while ocelli are absent. Dermaptera have a generally narrow body with the abdominal cerci enlarged and sclerotized to look like a pair of forceps except in the Arexeniina and Hemimerina. Despite belief to the contrary, these have no poison glands attached to them.

Earwigs are unusual among insects, in that the females of all species studied so far exhibit maternal care – of both the eggs and the early instar nymphs. Adults over winter, at least in temperate climates, in the soil. In Spring the female, sometimes assisted by the male, builds a brood chamber or nest underground or within a mound of rotting vegetation (or in some species such as Forficula auricularia, often under a rock).

After mating the eggs are laid, commonly at night and generally before the eggs hatch, the female evicts the male from the nest. The female attends the eggs carefully, turning them regularly and cleaning them until they hatch. After the eggs have hatched, the female leaves the nest to forage for food – some of which she feeds to the newly hatched nymphs.

The dermaptera nymphs remain in the nest in a huddle while she is away. The length of time that the female continues to brood and protect her young differs between species and it often ends when the nymphs start to forage for themselves. Though it may last into the nymphs third instar in Forficula auricularia.

Earwigs are omnivorous, and will feed on dead plant material and dead or slow invertebrates. At least two families are known to be commensal or ectoparasites with mammals, one with about 10 species (Hemimeridae, i.e. Hemimerus talpoides) on different species or subspecies of Rats in South Africa; and one with only two species (Arixeniidae Arixenia esau and Arixenia jacobsoni) on a species of Bat in South East Asia.

Well, perhaps now you’d be interested to learn a little about springtails.