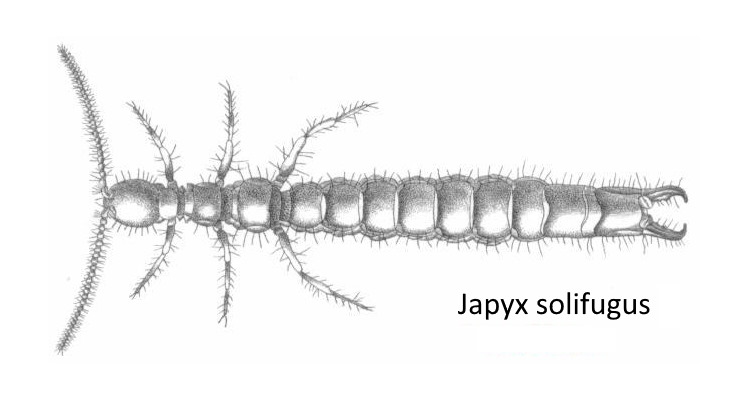 The Diplura or two pronged bristle-tails (from diplos = double and oura = a tail) are a group of soil and leaf-litter insects of ancient origin. They are mostly small (the largest being about 5cm long), often white in color and occur all over the world.

Diplura are endopterygota, flightless hexapods that are not considered to be true insects.  They have entognathous mouth-parts, (their mouths are inside their head) many segmented antennae, ten large abdominal segments followed by one small abdominal segment which carries the variably formed paired cerci. They have no eyes at all.

There are around 800 known species, 11 of which occur in Great Britain and 70 in North America. The cerci (or tails) are often long, but may be short and stubby or even pincer like.

Diplurans are often quite common in moist soil, leaf litter or humus.  However most people never notice them because of their small  size and subterranean lifestyles.  They have biting mouthparts and can be either carnivorous – feeding on a variety of live prey or herbivorous feeding on usually dead (occasionally live) organic matter.

Diplurans continue to grow throughout their life and continue moulting after reaching sexual maturity.  Moulting may occur up to 30 times throughout the life of a dipluran  Diplurans are believed to live for about one year.

The diplura are found on nearly all land masses, except Antarctica and occasional oceanic islands.  Their role as soil-dwelling organisms allows them to be indicators of soil quality where their absence can be seen to indicate lower or reduced soil quality, either as a result of too many anthropogenic chemicals or because of depletion of the organic matter content of the soil through poor farming techniques.

Like all entognathan hexapods, diplurans reproduce using external fertilisation. Males lay spermatophores which are held off the ground by short stalks.   The female collects the spermatophore with her genital opening, and later lays eggs in the moist soil.  Males may lay up to 200 spermatophores a week,

The larval forms do not undergo metamorphosis, but resemble the adults.  However they are considerably smaller and possess fewer setae.  They also lack reproductive organs until they have grown and moulted sufficient.

The image above is a lovely paintings of some diplura done by A.T.Hollick in the 1860s, part of John Lubbock’s 1871 monograph on the Collembola and Thysanura.

According to Page (1959) the Diplura are divided into two suborders and six families, but have a look at the more modern cladistic view at the Tree of Life.