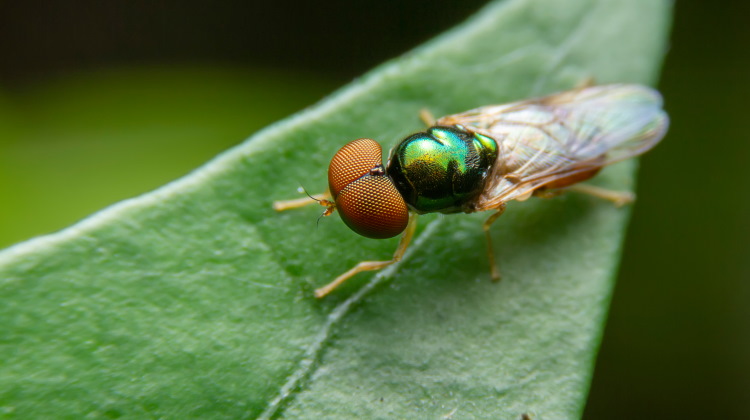 The Diptera or true flies are an amazing order of insects, which can be readily recognised in their adult forms because those which have wings (and most of them do) have only two. Nearly all other flying insects have four wings.

In the true flies the hind wings have become modified into a pair of small balancing organs called halteres. The only other insects with two wings are the Strepsiptera.

Strepsiptera are quite small and difficult to find and can be easily distinguished from true flies because they have the forewings reduced to balancing knobs – and fly with their hindwings. The opposite arrangement to flies.

Diptera are one of the major successes of the insect world. There are about 160,591 species (in about 160 families), as of March 2021 according to The Catalogue of Life.

Although not as speciose as the Coleoptera (550,000 species world wide) in the tropics, in the cooler parts of the world flies are the dominant insect group – both in terms of species and in number of individuals.

In the UK, the known number of Beetle species is about 4,000 and the known number of Fly species about 6,500. They are an incredibly diverse group with a wide variety of fascinating life cycles and ecological adaptations – studying even one family of them is a life-time’s work.

Although the taxonomy of the diptera is under constant revision at the moment, the consensus seems to be that they should be divided into two sub-orders: the Nematocera and the Brachycera.

These sub-orders are then divided into a series of Infra-orders; five for the Nematocera and four for the Brachycera.

However, for convenience I will deal with them as three separate groups:

The Nematocera are the Craneflies (Mosquito Hawks in the USA), Mosquitoes, Water Midges and Fungus Gnats as well as the No-see-ums. (Larva with a complete head and horizontally biting mandibles, pupa obtect, generally free, antennae of adults usually many segmented, pleural suture of mesothorax generally straight).

The Brachycera therefore are all the remaining flies.

The Brachycera: Cyclorrapha are the Fruit Flies, Hover Flies, House Flies, Stable Flies, Dung Flies, Blowflies, Bots, and many other families of smaller flies (larva with a vestigial head, pupa exarate, usually in a puparium, antennae of adult with three segments, pleural suture twice bent, head with frontal lunule and a ptilinum).

Flies can be found in most places in the world, and the common house fly Musca domestica has followed mankind to every corner of the earth.

Diptera have a holometabolous life cycle, this means that the egg hatches into a small grub like creature which doesn’t look anything like a fly at all. You have probably all seen maggots and mosquito larvae.

The larvae eats and grows and occasionally sheds its skin until it is big enough to make an adult fly, then it pupates; in the more advanced forms, inside its old larval skin (unlike most insects and the less advanced flies which shed their larval skin before they pupate) and changes into and adult fly.

Because there are so many species of flies with so many different life styles, it is difficult to generalize. However, larval flies live nearly everywhere; in the soil, the ponds and streams, the sea, in plants and animals. And they eat nearly everything: from dung and decaying plant material, through living plants to animals (including us) and even other flies.

True Flies are great opportunists and as adults they also eat a great variety of foods, though some don’t eat at all.

The mouth parts of adult flies are all designed either for sucking and sponging, or piercing and sucking. No adult fly can chew its food; biting flies actually should be called stabbing flies.

Diptera have been of incredible importance to mankind all over the world and it is possible to say that – on many occasions – it has been a fly which has changed the course of history. This is because many of the primary diseases of humanity are transmitted by flies

This means the disease is actually caused by a bacterial, viral or protozoan agent which spends part of its life in a fly and gets into the person when a fly pierces that person’s skin.

Two examples are Malaria (transmitted by mosquitos, which is believed to have killed more human beings than any other known disease and is still a major cause of illness in many countries) and Yellow Fever. It is well known that the assault of the tetse fly on both people and livestock has been the main obstacle to European colonization of North Africa.

True Flies are beautiful, often very beautiful, and always fascinating. But a few species, for one reason or another, are a nuisance to us in our daily lives and particularly in our homes. Because a housefly type of fly tastes a potential food item with its feet, it is always landing on anything that looks tasty to check it out.

Unfortunately it does not wash its feet after visiting a rotten peach or a piece of dog dung – and so bacteria can be easily exchanged from one medium to another.

Fly control is a large and varied industry and while it is obviously a good idea to have flyscreens on your doors and windows, some flies will still get in. Personally I have a great dislike of spraying chemicals around my home – or any enclosed space I am living in. Fortunately chemical sprays are not the only method of fly control available. Electric Fly Killers are not only efficient, but healthier and more ecologically friendly than any chemical control measures.

Though everyone thinks of spiders feeding primarily on flies (and it is true that spiders eat an awful lot of flies), the spiders don’t always get it all their own way.

A Dance Fly Microphorus crassipes (Empididae) steals much of its food from the spider’s own web. Robber Flies (Asillidae) have been observed catching and eating spiders which were sitting on a blade of grass.

Other families of flies the Acroceridae and Cyrtidae are all internal parasite of spiders during their larval life. The eggs are laid on the ground and the first instar larva wait on damp vegetation for a passing spider. They leap up and attach themselves to the spider’s body, where they slowly eat their way through its cuticle before eating the spider from the inside out.

Not all flies can fly. Some have given up their wings and in some cases their halteres as well.

This has occurred in a number of families, including the some Gnats (Mycetophilidae and Sciaridae) i.e. Epidapus venaticus; Midges (Chironomidae) i.e. females of the genus Pontomyia; Crane Flies (Tipulidae) i.e. the snow-fly Chionea sp which lives above the snow line in Europe in temperatures as low as -10 C; Coffin Flies (Phoridae); some species of Louse Flies (Hippoboscidae) i.e. the Sheep Ked Melophagus ovinus; and the Bee-louse Braula caeca (Chamaemyiidae).

Although some flies are very common and can be found all over the world, some are very rare i.e. Mormotomyia hirsuta a largish fly which lives in a crack about a meter wide in the rocky outcrop at the top of Ukazzi Hill in Kenya.

The larva feed on the dung of the bats, which also live in this rocky crevice. It is believed the adults feed on the sweat and other body secretions of the bats. This is the only place in the world where this fly has ever been found

Because of the large number of species of flies in the world (around 160 different families) it would be impossible to tell you about them all. So I’ve tackled the major Diptera sub-orders in the pages below for you to explore.

For more detailed taxonomy you can also see the Australasia – Oceania Diptera Catalog.

The Dipterists Forum was launched at Dipterists Day on 12th of November 1994 at the Natural History Museum, London. It arose out of the old Diptera Recording Schemes’ Central Panel and is now a fully fledged society, dedicated to the study of the Diptera of Britain.

It produces a number of publications and organizes a large number of workshops and meetings, both indoors and out. See also the web forum Diptera.info, which (while not related) is more international.

The Bulletin allows communication of information of all sorts – apart from actual papers which should be submitted to the Journal – between Dipterists both professional and amateur. As well as serving as a broad sheet to advertise the various meetings and workshops, both indoors and outdoors, organized by the various aspects of the Society.