In Praise of Dung Beetles

Working late the other night, I was pleasantly surprised to receive a visit shortly after sunset from several Aphodius rufipes.

Being attracted to the lights of the lab I was working in, which is on a dairy farm, they simply flew in the open window to say hello. I though this might make a good excuse for me to role a small ball of dung beetle facts your way.

Dung beetles are a relatively modern group of beetles and their fossils only extend back to 40 million years ago. This means, as far as we know, they were not around when the dinosaurs were around – though many other beetles were.

This leaves me wondering what happened to all that Dinosaur dung… it must have been pretty messy back then.

As beetles go, dung beetles do not form a spectacularly large group; there are about 7,000 species world wide. When you compare this with 44,000 weevils, you can see that some other beetle families contain far more species. We have about 60 species in Britain and most (50) of these are in the genus aphodius. 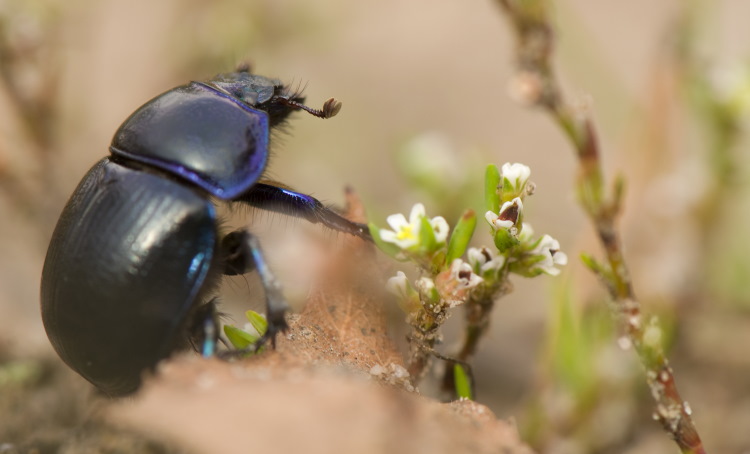 Dung beetles are never excessively common in Britain and – as most of them are small and nocturnal – few but the larger Dor Beetles (Geotrupes spp.) and the Minotaur Beetle (Typhaeus typhoeus) get noticed by anybody not playing around in a cow pat.

Why Are Dung Beetles Important?

However, in tropical climes they can be extremely numerous and busy workers. In 1973, a guy called Jo Anderson recorded the action as it happened at a small 1.5 Kg pile of Elephant dung on the African savannah. In two hours that small pile of dung attracted 16,000 dung beetles of various shapes and sizes, who between them ate and/or buried that dung completely in just those two hours.

This is why dung beetles are so important: because they get rid of so much dung in such a useful way.

This not only makes the world a nicer – and distinctly less smelly – place to live in, but also reduces the numbers of other insects like flies – which also like to breed in dung and help in the recycling of soil nutrients.

Most of the dung in the world is produced by what we call ‘Megaherbivores’ i.e. Cows and Wildebeest etc. (a caterpillar is a microherbivore). It is not surprising therefore that most of the dung beetles in the world use herbivore dung; though many are not very particular and will use many different forms of dung. Aphodius fimetarius a common species in Britain and Europe can be found in sheep, horse and cow dung. 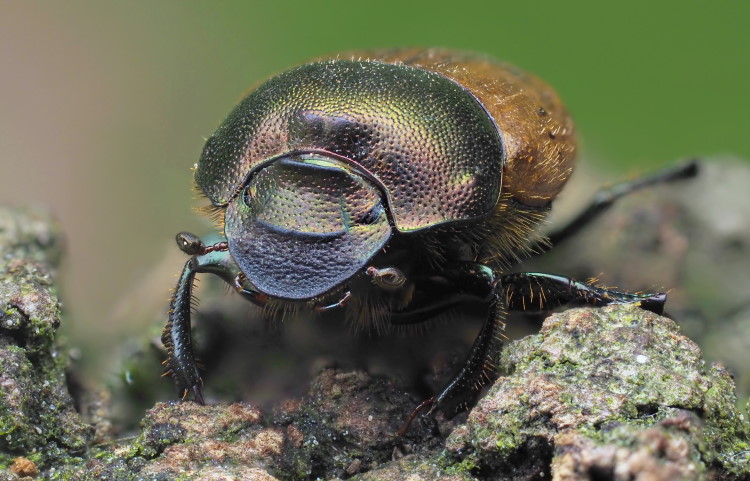 Some species have definite preferences for one type of dung only. Geotrupes stercorarius is only commonly found in cow dung; while in Southern Europe Aphodius bonnairi is a specialist on rabbit dung; and Onthophagus caenobita is mainly found feeding in human faeces.

Just about every sort of dung is used by some dung beetle somewhere. Reptile, Amphibian, Bird and even other insect dung is rolled up and buried or eaten by these industrious little workers. Strangest of all (to my mind) though is a dung beetle in South America called Zonocopris gibbicolis, which feeds on the faeces of large snails on whom it rides around.

Dung beetles can be conveniently divided into 3 groups, Rollers, Tunnellers and Dwellers.

Rollers are far more successful in the tropics than they are in temperate areas. Rollers are species who make a burrow some way away from the dung they are going to use – and then collect small to medium sized lumps of dung to role away from the source and into their burrows.

We only have one ‘Roller’ in Britain, this is Typhaeus typhoeus the Minotaur Beetle; this amazing animal can dig burrows up to one metre deep. Mostly it likes to work with sheep and rabbit dung. It is very active through the wet winter months, but spends the hot summer dry asleep under the ground. 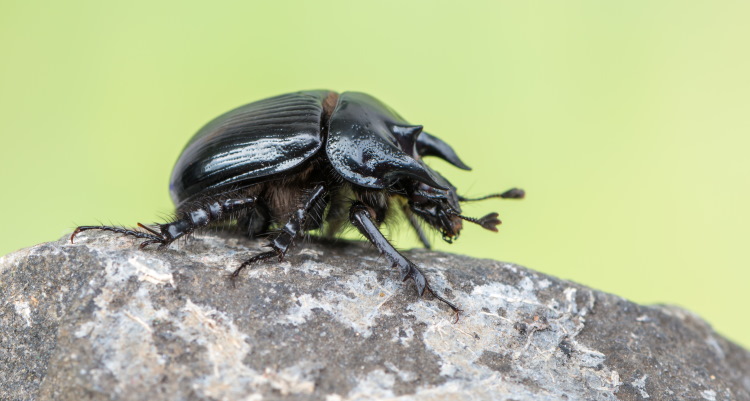 Generally the female does most of the digging and the male spends most of his time collecting the dung for her. Down in her tunnel she digs a number of side burrows; each of which she fills with dung and then lays one egg in – before back filling the burrow a bit more with soil.

The well known ‘Dor Beetle‘ Geotrupes stercorarius is a classic example of a tunneller. Generally speaking dung beetles are good fliers and the single Dor Beetle flies along until he or she finds a nice fresh cow pat into which she/he dives.

Once a pair have got together, they dig a tunnel beneath the pat and then drag as much dung as they like down into it. Again it is mostly the female who stays in the burrow, sorting out the dung, and the male who goes out to get it.

The most common, but least seen, dung beetles in Britain are in the very successful genus ‘Aphodius‘, which contains over 1,000 species world-wide; we have about 50 species of Aphodius here in the UK.

All species of Aphodius are ‘Dwellers’. That is, they spend as much of their lives as possible digging around inside some sort of dung. They lay the eggs straight into it and the larvae live in it – where it is happily eating their way through it. 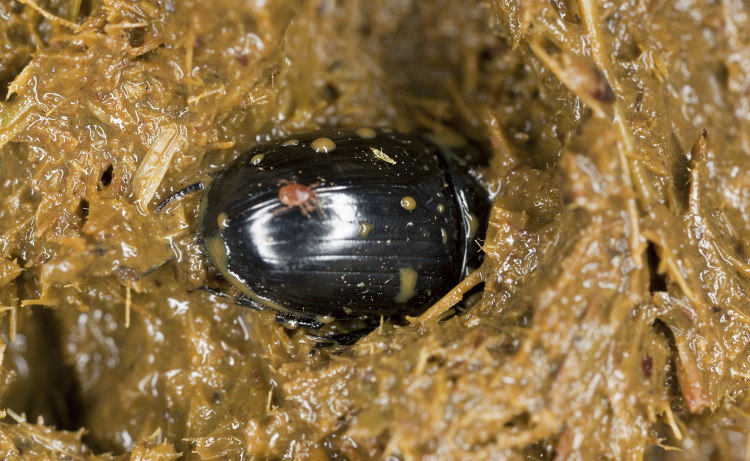 Cows and other megaherbivores are not very efficient digesters of grass and their dung is mostly composed of half digested grass and the smelly liquid portion. It is this smelly liquid portion that the adults like to feed on. Some of them have specialised mouth parts, designed to let them suck out this nutritious soup (which incidentally is full of micro-organisms which the beetles can digest).

Though most dung beetles are very useful and hard working, a few are thieves or ‘Kleptocoprophages’.

All dung beetles are Coprophages, that just means “feeding on dung”. A Kleptocoprophage is a dung beetle that eats and lays its eggs on dung that some other beetle has collected. This is a form of Kleptoparasitism, as the thief often eats the legitimate dung-owner’s eggs as well as stealing their dung.

Aphodius porcus is a Kleptocoprophage / parasite of the common Dor Beetle… these are definitely not nice guys.

Dung beetles have an amazing variety of life cycles and the females of many of the larger ‘Rollers’ stay inside their burrows and care for and protect their eggs and young. These species can live for up to 3 years. Some of these larger dung beetles are incredibly strong and move balls of dung up to 50 times their own weight.

In Australia, dung beetles are considered to be real heroes.

Before 1788, there were no cattle in Australia. Therefore the dung beetles there had not evolved the ability to deal with all this wet, smelly cow dung. They were used to nice, clean, dryish kangaroo and other marsupial dung; most of them would have nothing to do with this modern import.

There are about 20 million cattle in Australia and each one drops about 12 pats a day; this is a huge amount of dung with no beetles to get rid of it.

What was happening was 2 things: first the dung fouled millions of hectares of grazing land, causing the growth of rank grasses which the cattle did not like to eat. Secondly, the flies moved in: two species of them, The Buffalo Fly a pest of the cattle; and the Bush Fly, a pest of everyone. 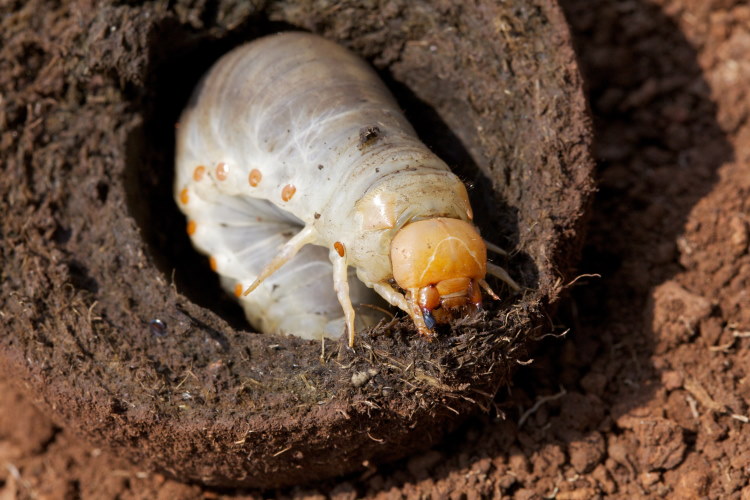 When you think that every one of those cowpats I mentioned earlier can produce 2,000 flies, you will be able to work out that about 480 thousand million new flies were emerging everyday in Australia.

That is just freaky. No wonder they invented special hats just to keep them away!

So what else did the Australians do? What they did was really very clever: they imported 45 species of dung beetle from various parts of the world (mostly Europe and Africa). Of these, 20 are doing very well; and the problem, much to everyone’s enjoyment, is just about solved.

Dung beetles are often referred to as ‘Scarabs’, hence the classification Scaraboidea. At least those of the roller persuasion have been noticed by mankind for a long time; in ancient Egypt, the scarab or dung beetle was their most important religious symbol.

In some Indian tribes from South America, a scarab beetle named Aksak is supposed to have modeled the first man and woman from clay (an oblique reference the dung beetle’s habit of shaping the dung into balls).

An ancient Taoist text, The Secret Of The Golden Flower, contains the following quote:

“The scarab rolls his pellet and life is born in it, as an effect of non-dispersed work of spiritual concentration. Now, even in manure an embryo can develop and cast his ‘terrestrial’ skins. Why should the dwelling of our celestial heart not be able to generate a body too, if we concentrate our spirit on it?” 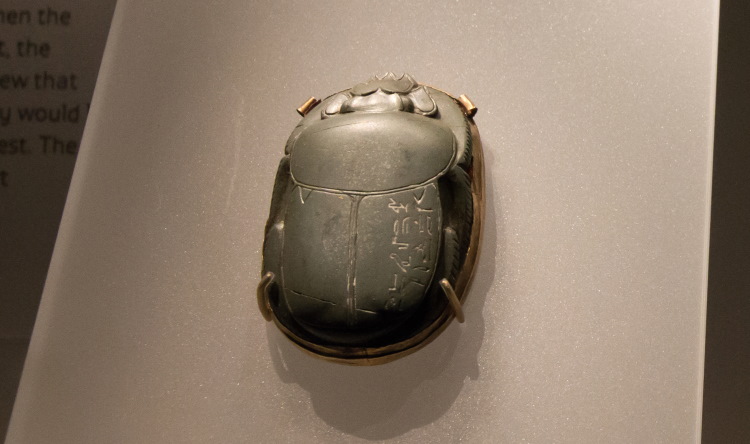 In Egypt, the center of scarab worship, the beetle which inspired the locals at the time was probably originally Kheper aegyptiorum (a brightly coloured species, which is now rare there because the climate has changed). Later it passed to the black Scarabaeus sacer. In more modern times, reference is only made to S. sacer.

Khepri was a scarab god of the sun and the important symbolism came from the scarab’s rolling of his ball of dung, then taking it down into the soil from where new life later emerged.

They reasoned that if both the sun and a scarab beetle could be reborn in a special container in the ground, then why couldn’t people. It is now believed by some modern scholars that the Egyptian mummy in its tomb/pyramid was a representation of the pupa of S. sacer, in the remains of its ball of dung in the earth.

Scarab amulets became immensely popular and remained that way for centuries; they are the most common archeological relics from the N. African region.

Well, I hope this has been a curious introduction to the wonderful world of the Dung or Scarab beetle. An insect most certainly worthy of our sincere study!

Perhaps now you’d like to learn a little more about the humble ladybug.