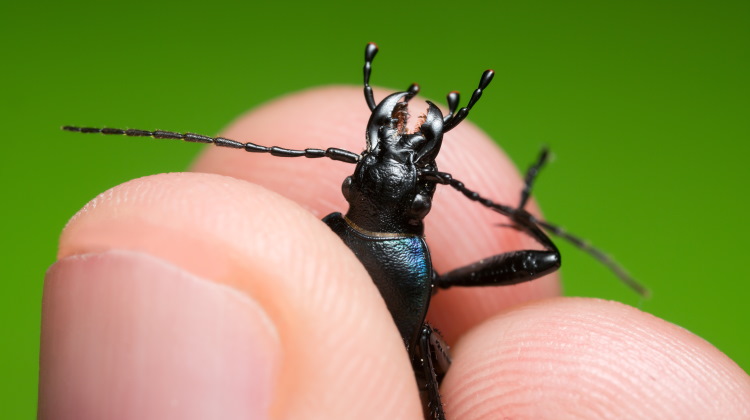 Ground beetles (Carabidae) are one of the largest and most successful families of beetles in the world.

There are more than 40,000 species of Ground Beetles in the world, most of which are found in the tropics. Britain has around 350 species.

Not only they are fascinating and easy to find, but they are relatively easy to keep in captivity and will readily reproduce – so that you can study all of the life cycle. The largest species in Britain is Carabus intricatus, which is very rare and can only be found in a couple of places on Dartmoor.

Plastic storage boxes or washing-up bowls make suitable cages to keep your pet beetle in. A layer of peat (or coir compost) or sand needs to be put in the bottom. This must be kept moist (but not wet) at all times. A shelter must be provided; this can be a large stone or up-turned flower pot saucer.

Most Ground Beetles are omnivorous and can be fed on a variety of foods such as fly larvae, small seeds, ant pupae (sold as ant eggs for fish food), aphids or any other small insects.

Some species however are specialist feeders, i.e. Harpalus rufipes (the Strawberry Seed Beetle) on seeds; Loricera pilicornis (the Springtail Beetle) on Collembola; and Abax parallelopipedus (ater) and Cychrus caraboides on slugs and snails.

The larvae are generally carnivorous – and always so, if the adults are. Most species of Ground Beetles are cannibalistic.

This isn’t too much of a problem if they are kept well fed and not overcrowded, but it may be a good idea to take out any larvae found and keep these in a separate container to prevent cannibalism.

Abax parallelopipedus is a species which is not cannibalistic and therefore makes a very good pet beetle or study animal. It can often be found under rotten logs in woodlands.

In general the number of eggs produced depends on nutrition, environmental factors such as moisture, temperature, and the age of the beetle.

Research indicates that Carabids in the wild seldom reach their reproductive capacity. As in most predators, egg production is related to food supply. It has been found that the number of eggs produced is inversely related to body mass; hence large species lay less eggs and that autumn breeders tend to lay more eggs than spring breeders.

Also members of a given species tend to lay more eggs in disturbed conditions than in stable ones. In the first year females will lay 5-10 eggs per female (in those species with egg guarding behaviour), but up to several hundred in those that don’t.

Eggs are laid all in one batch, as several batches per season and in some species over several seasons. Whilst in the second year, in most species, far fewer or no eggs are produced. Some species lay their eggs individually on the surface of the soil, while others dig holes and lay their eggs in these before covering them over with soil.

A few species dig nests with chambers and provide brood care in the form of guarding the eggs and licking them to remove fungal spores (e.g. Harpalus sp.). The eggs normally take at least five days to hatch depending on the species and environmental conditions.

There are usually 3 larval instars before pupation, however species of Harpalus and Amara have only 2 larval instars; while other species, particularly those which are ant or termite symbionts, have four larval instars. Many species diapause (overwinter hibernation or summer aestivation).

Generally development takes about a year from being an egg just laid, to laying eggs – though it can take up to 4 years in harsh conditions, i.e. Carabus problematicus is univoltine up to 800 metres in height but semi-voltine above that.

Other species such as Carabus auronitens are more flexible and adapts to the prevailing conditions. A pupal chamber is constructed in the soil. They normally take at least 5 or more days to emerge from the pupa.

By Liz Asteraki and Gordon Ramel