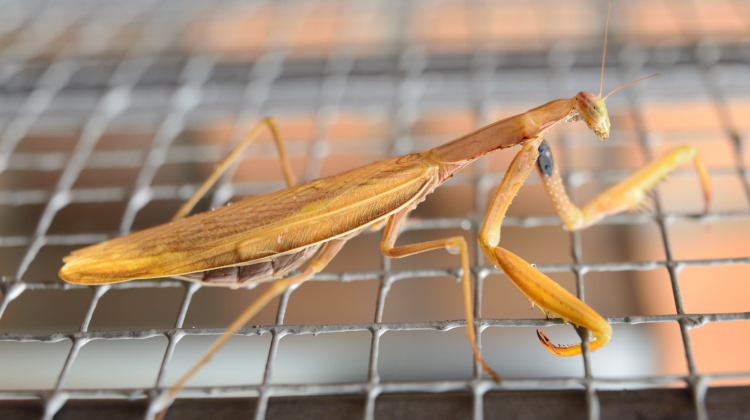 The Mantids are a group of 1,800 carnivorous insects. Most mantids are from tropical countries, although a few do occur in cooler climates. Their closes relatives are the stick insects, grasshoppers, and cockroaches.

Like their relatives, mantids undergo simple or incomplete metamorphosis; they do not have a maggot or caterpillar but go through several stages all of which look like miniature, wingless adults.

Because of their tropical origins they need to be kept warm, as a general rule 20C to 25C will be ideal. Initially a small container such as a yoghurt pot, 3 by 1 inch entomological tube or any other small container will make a suitable cage.

As the mantis grows, it will shed its skin several times, becoming larger at each stage. It can progress into a jam jar or milk bottle and finally into a sweet jar.

The top of the yoghurt pot can be covered with several layers of clingfilm, with a strip of sellotape over the top. A small hole can be made through the sellotape and clingfilm, to allow food to be put in. The hole can be plugged with a piece of sponge which can be wetted to maintain humidity.

A similar plug can be used in the neck of a bottle or a hole drilled in the lid of a jar. Whatever type of cage is used, a stick or branch should be provided for the insect to hang from when it sheds its skin. The distance from the top of the branch to the floor must be at least three times the length of the insect.

The eggs are produced in an eggcase called an ootheca, this may produce 30 to 300 young mantids depending on the species. Hatching usually takes between 3 and 6 months. The young may hatch all at once or in batches over a period of several weeks.

The ootheca should be suspended at least 5cm above the floor of the cage. When the young hatch they hang by a thread from the ootheca until their skin hardens off. The young should be fed on fruit flies (Drosophila sp.), aphids or other small insects.

They do well if supplied with as much food as they can eat, although they can last quite a while without food.

Many species are very aggressive towards each other and, if kept in groups, they will eat each other – especially as one or two become slightly larger than their brothers and sisters.

Some species will happily tackle prey as large as themselves. As they grow they can be given larger prey, almost any insects will be eaten.

Most Mantids do not usually need to drink, though this will reflect the humidity of the atmosphere you keep them at. However if you mist the inside of the cage, you may observe them drinking. They need a certain amount of humidity to help them moult successfully, so supplying a small container of water filled with pebbles or cotton wool (so they can get out if they fall in) is a good idea.

Sexing mantids is difficult when they are small, but fairly easy when adult. Eight segments can be counted on the underside of the male’s abdomen and six on that of the female (in some species the end segments are difficult to see and only seven or five can be seen).

After two or three weeks as adults the mantids can be mated. Both should be fed as much as they will eat for several days before the male is introduced to the female’s cage. It is advisable to use a large cage for the mating and feeding them well before hand is essential, otherwise the female will eat the male.

Mating may occur immediately or it may take the male a day or so to make his approach. Mating may last a day or more, so it is a good idea to keep the cage supplied with food so the female can eat while mating. The male should be removed as soon as mating has finished.

The female will eat a lot and become very fat before laying an ootheca on a branch or side of the container. If she is already fat, she may well lay her first ootheca the day after mating.

She will lay several others, usually about six, but only needs to be mated once. Hatching usually takes between 3 and 6 months. The young may hatch all at once or in batches over a period of several weeks depending on species.

Young Mantids like young Cockroaches, Grasshoppers and Crickets hatch as a pronymph surrounded by a protective membrane – within which they move like grubs to the surface of the ootheca. In some species there is a single exit tube along the bottom of the ootheca, from which the young Mantids emerge individually. In others, the young emerge through the oothecal wall nearest there particular egg cell.

In either case, they will hang suspended from the ootheca on silken cords secreted by a pair of papillae on the lower side 10th abdominal segment. In those species where they all emerge from a single exit tube, these cords will get pretty tangled but the young mantids seem to extract themselves OK. They rapidly escape their protective case and climb up the silken cord to the ootheca.

Sphodromantis viridis from West Africa is an easy species to keep as a pet praying mantis; very suitable for beginners.

They are about 8cm long and either bright green to light brown in colour. They will happily take food of their own size and they will also take pieces of meat if it is offered on a pair of tweezers. Their ootheca can contain up to 300 eggs.

If you enjoy taking care of your Praying Mantis pet then why not join the Mantis Study Group.