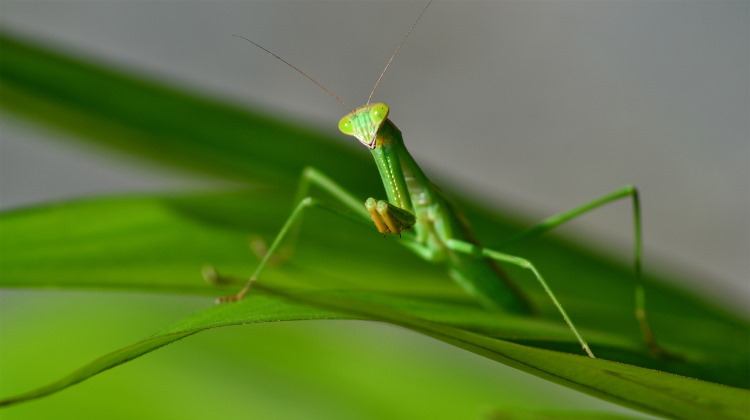 There are about 2,000 named species in the world at the moment, most of which are tropical. They occur throughout the tropics and in many of the sunny temperate zones of the world, such as Southern Europe, North America, Canada and South Africa.

Praying Mantis have attracted mankind’s attention for centuries and there are even several martial arts styles named after them.

The name derives from the Greek word for a prophet or seer; an early reference to the Mantid’s habit of standing still for long periods of time with its forelegs held folded up before it (an attitude reminiscent of a person in prayer).

Did you know Praying Mantis are commonly kept as pets and are relatively easy and great fun to rear?

Like their relatives the Cockroaches, Mantids undergo simple or incomplete metamorphosis; they do not have a maggot or caterpillar, but go through several stages all of which look like miniature, wingless adults. The number of nymphal stages varies between species and possibly as a result of food intake.

Males and females can be distinguished on the basis of the easily visible abdominal segments; there being 6 in the female and 8 in the male.

Most Mantids are medium sized insects, though some are very large. There is a species of Heirodula in Sri Lanka which can reach 25 cm in length and, like other very large species from South America, will feed on small birds and reptiles as well as on other insects. Some can also be quite small, never reaching more than 1 cm in length.

Though most species hunt amongst vegetation, there are a few species that live on the forest floor and hunt among the leaf litter.

Praying Mantis generally have an elongated prothorax (the first thoracic segment) which facilitates both their ability to look around them and to follow a moving insect without moving the rest of their body (and thus giving away the fact of their presence). As well as the ease with which they can eat their prey once it is firmly held in they raptorial forelegs.

Most species are winged, though to the best of my knowledge no Praying Mantids migrate and the females tend not to fly once they have been mated and are heavy with eggs. Mantids tend to fly more at night than during the day, which brings them to the attention of Bats who see them as a source of food.

Some species have learned to hear the sonar used by the bats to navigate and to stall their flight – dropping ‘out of sight’ of the bats perception and thus escaping being dinner.

The mantids hear the bats with a single mid-line ear on their metathorax. This possession of only a single ear, as compared to the more normal pair of ears, is unique to Mantids.

Bats are not the only animals that will eat mantids; many mantids are cryptically colored and adorned with cuticular outgrowths that result in them looking like grass, leaves, flowers and/or pieces of stick or twig.

Praying Mantids are all carnivorous, living on the bodies on other animals; mostly insects which they catch with their powerful forelegs and then devour using their equally powerful jaws (generally only the wings are left).

A hungry Mantid, faced with several smaller prey items, is quite capable of holding the first prey it catches in one forelimb; and striking and catching a second prey item with the other (which is devoured after the first is finished).

As far as I know, no-one has studied whether or not they make a choice about which foreleg to use to hold and which to use to make the second strike. I have only seen it twice myself and it was the right foreleg which was used to hold and the left to strike in both occasions.

Though mantids will eat many different things, they are quite capable of rejecting an item which is unpalatable.

Praying mantis eggs are produced in an egg case called an ootheca; this may produce 30 to 300 young mantids depending on the species. A mated female produces more than one ootheca, depending on how much food she gets and how long she lives. Some Miomantis species have been recorded laying as many as 22.

The ootheca is a sort of polystyrene egg box which is secreted by the female as a liquid and then whipped into a froth around the egg cells; it varies in structure between species. For many temperate species, the ootheca is the overwintering stage.

The ootheca provides some protection against the environment and hides the eggs from many predators. However, many are still parasitised by members of the Hymenoptera Parasitica (Parasitic Wasps), whose long thin ovipositors allow them to lay their eggs inside the cells hidden within the hardened foam of the ootheca.

Hatching usually takes between 3 and 6 months. The young may hatch all at once or in batches over a period of several weeks. Young Mantids (like young Cockroaches, Grasshoppers and Crickets) hatch as a pronymph surrounded by a protective membrane, within which they move like grubs to the surface of the ootheca.

In some Mantodea species there is a single exit tube along the bottom of the ootheca, from which the young Mantids emerge individually.

In others, the young emerge through the oothecae wall nearest their particular egg cell – and hang suspended from the ootheca on a silken cord secreted by a pair of papillae on the lower side 10th abdominal segment.

They rapidly escape their protective case and climb up the silken cord to the ootheca. Young Mantids are extremely active and disperse rapidly from the vicinity of the ootheca. Though many are caught and eaten by ants, or fall prey to spiders and other predators at this stage (or while they are still struggling with their protective hatching suits), they soon become the predators and take to standing still – waiting for their prey to come to them.

Praying Mantids are renowned for the female’s tendency to eat the male during copulation.

Though this does not occur in all species; many smaller species such as Ameles spallanzania are not cannibalistic at all. In some species it is obligatory and the male can not pass on the spermatophore containing his sperm until he has had his head removed.

From an ecological point of view, for a species which lives thinly spread throughout their habitat and in which a male is therefore unlikely to encounter more that one female before something eats him (and in which the females are very fecund – in some species a mated female can produce as many as 6 ootheca, each containing up to 300 ova i.e. Tenodera aridifolia sinensis), the male most enhances his chances of leaving offspring behind by mating with one female only and having his body then supply her with nourishment for the development of the first lot of eggs. Female mantids only mate once.

Some study has been done on Mantis religiosa the common European Mantid, which suggests that some of the time at least, the female attacks and eats the male simple because she fails to recognize him.

The male is capable of successfully mating with the female after his head has been removed because copulatory activity is under the control of his last abdominal ganglion. Thus copulation is either not affected by or (in cases where the sub-oesophageal ganglion of the head secretes inhibitory substances) is actually stimulated by the removal of his head.

The Suborder Mantodea is divided into 8 families of which 3 (Chaeteesidae, Metallycidae, and Mantoididae) contain only one small genus and 1 (the Mantidae) contains the majority of the species.

There is a Taxonomic Key to Praying Mantis Genera, courtesy of David Oliviera, also available.