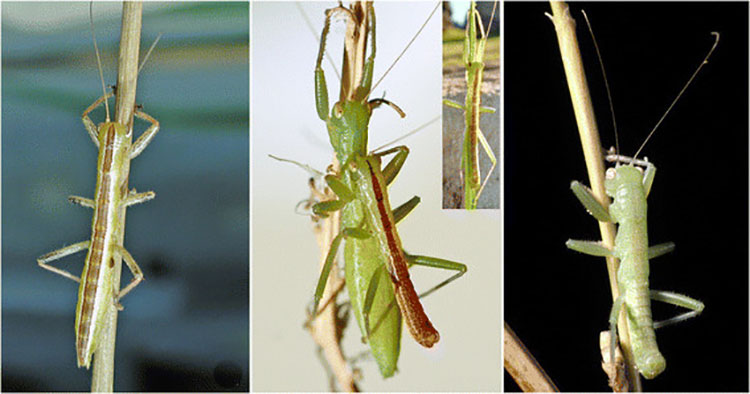 Mantophasmatodea is an order of insects that was only officially discovered this century.  They were first described in 2002 and since then at least 19 species have been discovered according to the online database The Catalogue of Life.

They are commonly known as Gladiator Bugs, African Rock Crawlers or Heelwalkers. In colour they vary from dark brown through reddish brown to green, they may be adorned with black or red spots.

To some extent they look like a cross between  Mantids (order Mantodae) and Stick Insects (order Phasmida) though they are not apparently closely related to either order.   They often hold up the last segment of their legs, which makes them look as if they are walking on their heels (which is why they are sometimes called Heelwalkers).

All the mantophasmatodea are small to medium sized insects that are wingless and predatory.  Although they are wingless, certain anatomical features prove that they do really belong in the Pterygota – the winged insects – and that they must have lost their wings millions of years ago.  The oldest known fossil species dates from the Eocene (45 million years ago) and was found in Baltic Amber.

Gladiator bugs are all carnivorous and predatory, meaning they hunt for their dinner.  Some species feed on insects as large as themselves, others only tackle smaller prey.  They have modified raptorial legs with numerous spines that allow them to catch and hold their prey.  Many of these insects are nocturnal, emerging only at night to hunt and feed however other are active during the day.

The Mantophasmatodea are restricted in their distribution to parts of southern Africa; Tanzania, Namibia, and the southwestern corner of South Africa.  Across this area they occupy three biomes nama karoo, succulent karoo, and fynbos. All of these habitats are linked by being fairly arid regions with no trees but an otherwise diverse flora and a large range of temperatures between day and night.

Gladiator bug eggs, which have been laid in special cases, hatch into nymphs which look like miniature versions of the adult.  Hatching is triggered by the commencement of the rainy season.   These nymphs roam around eating whatever they can catch and molt several times.  Typically they reach maturity towards the close of the wet season, and die, after mating, during the dry season.

Reproduction is simple but prolonged in these interesting insects.  No courtship has yet been observed. To achieve copulation, the male simply jumps onto the female and bends his abdomen aside, around and down to bring his copulatory organs into contact with the hind part of the female’s abdomen.

The pair may remain in-copula for up to 6 days. Once the copulation is over the female will produce several sausage-shaped egg pods. Each of these will contain about 10–20 long, oval eggs covered by a hard envelope made from sand and glandular secretions. The ovipositor is used to shape the egg pod and for correct positioning of the eggs.

In the females, segments eight and nine of the abdomen carry three pairs of processes (valves) that work form a short ovipositor. The second and third valves are usually fused, and the third is very hard and claw-shaped. The genital opening is found behind the eighth sternite, which forms the subgenital plate. In the male, the ninth sternite is elongated to form the subgenital plate

The male genitalia are largely membranous. For copulation they become everted and display two or three small sclerites and two small sclerotized hooks.  The males also use their enlarged and curved cerci to grasp the female.

Recent phylogenetic studies using both morphological features and genetic data from deoxyribonucleic acid (DNA) sequence analyses have shown that the Mantophasmatodea are most closely related to species in the order Grylloblattodea (ice bugs).  It is perhaps a coincidence that they Grylloblattodea was the last order of insects to be described (1914) prior to the discovery of Mantophasmatodea.