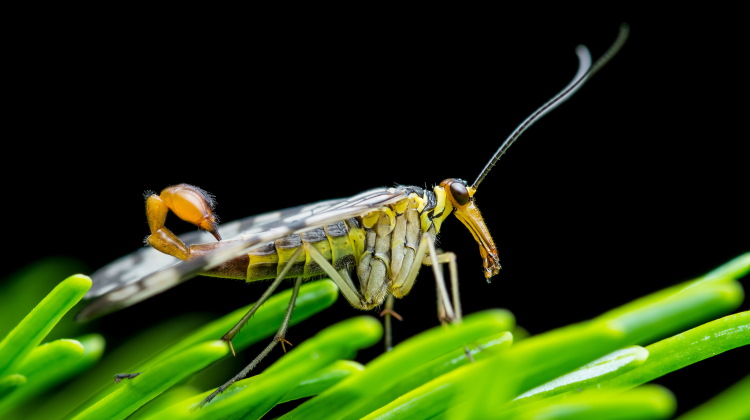 The name Scorpionfly applies to the fact that some male Mecoptera tend to carry their genitallia in an upturned position, giving it some resemblance to the tail of a Scorpion, i.e. Panorpidae and Boridae.

Besides this, Scorpion flies are recognised by their beak-like head and clear spotted wings. They are also known as ‘hanging flies’ because some species, such as Bitticus italicus, hang from the vegetation with their front legs and catch the small insects they prey on in their hind legs.

There are more than 769 named species of of Mecoptera according to The Catalogue of Life.  They are among the oldest of they holometabolous (having a complete metamorphosis i.e. egg, larval instars which does not resemble the adult, pupa and then the adult or imago) insects, dating from the Lower Permian 250 million years ago.

Scorpian Fly are described as small to medium sized slender insects with long filiform antennae. The head is extended into a deflexed rostrum or beak, with biting mouthparts at its end, and is not broader than the front of the thorax. The eyes are prominent and semi-globose. The legs are long and slender, as are the 2 pairs of nearly equal wings which are also membraneous and clear with various dark patterns.

The larva are generally eruciform (like a catapillar), but may be modified scarabeiform (grub like, with a well developed head, a thick cylindrical body and 3 pairs of thoracic legs, but no prolegs) i.e. Boridae and Panorpidae, or campodeiform (elongate and flattened with well developed legs and antennae) as in the Nanochoristidae.

They have biting mouth parts and 3 pairs of thoracic legs. The pupa is exarate (having its appendages i.e. legs antennae etc. free outside of the main body of the pupa) and dectitious.

Scorpionfly eggs are unusual in that they expand as the embryo develops within – by as much as 100% in some genera. Egg development can be as short as 5-10 days (below 1,000 metres) in some species of Panorpa and Neopanorpa, or many months long in those species which overwinter as an egg i.e. Bittacus stigmaterous.

The larvae of some Scorpionfly (i.e. Panorpa, Neopanorpa and Chorista) are unusual among the holometabolous insects, in that they have truly compound eyes with 30 or more omatidia (one lens and its accompanying bits and pieces in a compound eye) rather than the simple ocelli more normal of the higher insects.

Larva are believed to be saprophagous (feeding on dead and decaying organic matter) on dead insects in general, often from a burrow excavated underneath the dead insect. The Nannochoristidae have aquatic larvae which prey on Chironimid larva. Some species are known to be herbivorous or partly so; the larva of various Boreids have been observed feeding on mosses,

Scorpionfly Larva pass through 4 instars before excavating a whole in the ground and becoming inert in it, as a prepupa.

The prepupal stage may last only a month in those species which are semivoltine (having 2 generations a year) to many months in those which are univoltine (having one generation a year) and which overwinter as the prepupa. Pupation occurs in the cell in the soil excavated by the larva and. after about 10-50 days. the adult or imago emerges.

The Imago Scorpionfly (or Adult)

Adults of most Mecoptera species feed on soft bodied insects, either saprophytically as in various species of Panorpa, or by actively catching them i.e. Bittacus species.

Diptera (Flies) account for over 50% of the food items of some Panorpids. Panorpids may also feed on nectar, pollen, fruit juices and the bodies of other dead animals besides arthropods.

Many Panorpa sp. feed on the insects trapped in spiders webs, walking around the web themselves quite freely. This is not to say that Spiders do not catch their share Mecopterans, but presumably ones which weren’t looking where they were flying.

Most Panorpid species feed both at day and at night, but some species such as Panorpa nuptialis only feed during the day. Species of Bittacus catch their prey either in midair, or snatch it off a plant while they are flying – or as it passes when they are hanging down from a piece of vegetation.

Mating in the Mecoptera is complex, varied and fascinating.

It is hard to generalize about the whole Order, except to say that it all starts when a male emits a pheromone which attracts females – and in some cases other males as well. Here are a few scenarios to wet your appetite.

The genus Panorpa choose one of three different mating strategies:

Males compete for the arthropods, both for their own use, or to use as gifts. It has been shown that only males which lose out in these competitions resort to forced copulation. Further, it has been shown that females prefer males with food gifts – and that females mating with males that supply gifts lay more eggs than those mating in forced copulations.

In the genus Hylobittacus, males first acquire a dead arthropod and – after feeding on it briefly – either discard it (in which case he will seek out another one) or, holding the prey with his hind legs, fly around from place-to-place. Each time he stops, he emits some of his pheromone and waits a short while for a female to respond.

An attracted female then starts to feed on the arthropod; if it is suitable she stays and copulation occurs. If for some reason she finds it unsuitable, she flies of and looks for another male either immediately (or after copulation has started, but before sperm transfer has occurred).

Male scorpion flies actively steal prey from one another – and one of the variety of tricks males use to successfully pillage from each other is imitating a female!

Boreids lay their eggs singly among moss, while female bittacids drop theirs to the ground while hanging by their for limbs from the vegetation.