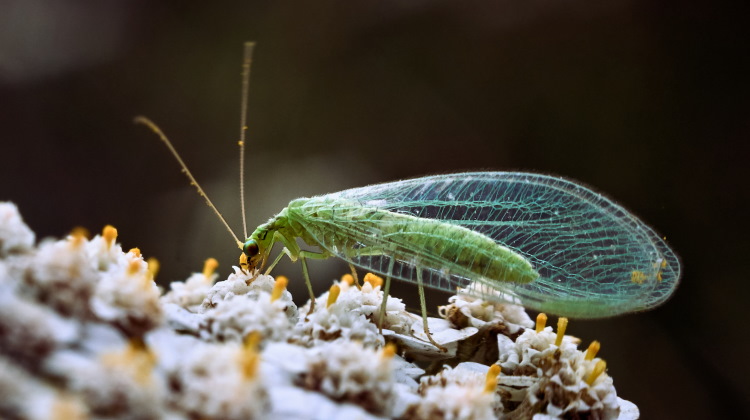 The Neuroptera are a diverse yet fascinating group of about 5,400 species of insects, which seem so often to miss out on the attention they deserve.

They are often easy to find and are well known as gardener’s friends. I hope the brief introduction to them that you will find below will leave you a little more aware of – and interested in – them.

They are described as soft bodied insects of variable size, usually with longish antennae. They have biting and chewing mouth parts both as larvae and as adults, though some of the adults do not feed. They generally have 2 pairs of wings, of which the hind pair are usually larger to some extent. The wings are normally held tent-like over their abdomen when not in flight. They have no cerci.

They have ten segments to their abdomen and 5 to their tarsi. They have large compound eyes. Their legs are all similar, except in the mantispidae which have raptorial grasping forelegs. Those adults which feed do so on dead insects, nectar and other liquids. The larvae are all carnivorous.

Many of the adults are relatively weak flyers and the larvae of some species attach the empty skins of their prey to their backs as a disguise.

The 300 odd species of Megaloptera are distinguished by the large pleated fan-like section on the hind wing of the adults.

Adult Dobsonflies can be quite large, 3-4 inches (1-10cm) long and the males have very large mandibles – which the males use to fight each other. Dobsonflies and Alderflies do not feed as adults.

The eggs are laid in compact masses on leaves or other objects near to water. Alderfly females lay between 200-500 eggs, but as several females may lay on the same leaf you can often find thousands of eggs together. Dobsonfly females often lay far more eggs, up to about 3 000.

The first thing the larvae do on hatching is to seek water. Dobsonfly larvae like to live under stones in fast flowing streams, and they can survive the stream drying out for some time. Alderfly larvae prefer to live in slower flowing or still water which has a muddy bottom.

The larvae are actively predatory and feed by sucking up the body fluids of their prey, through a hollow tube formed by a groove on the inside of their mandibles and their maxillae.

Alderflies occur all over the world, but Dobsonflies are restricted to North America and Asia. Most species have a univoltine lifecycle.

Snakeflies (Raphidiidae) are so called because of their elongated prothorax which imparts a snake-like image to them; they also tend to strike at their prey in a snake like manner.

The larvae are terrestrial and the eggs are inserted individually into cracks in bark by the female, who has a long thin ovipositor ideally suited for this action. The larvae live under loose bark where they feed on other invertebrates. There are about 175 species of these fascinating animals.

The larvae usually take two years to finish their development and go through 10-15 instars in the process.

Green Lacewings are by far the most common of the neuropterans, at least in northern temperate zones. Like the closely related Brown Lacewings, they are the gardener’s friends because of the large numbers of aphids they consume.

The larvae are all terrestrial. They have their ears in the large veins of their wings which allows them to detect the sonic of bats, the main predators of nocturnal flying insects (apart from spiders of course.) The eggs of green Lacewings are laid on the end of a thin stalk.

In some species, such as the cosmopolitan Chrysoperla carnea, the male attracts the female by vibrating his abdomen rapidly. The vibrations are transmitted down his legs to the leaf he is standing on (usually on the underside). A nearby female (up to 15cm away) will answer back in a similar fashion.

The male will then search out the female, at the same time he will keep signaling. When he finds her he will bow low, before her holding his antennae back beside his wings. She responds by quivering her wings against his head, while they both twitch their bodies vigorously.

The female then kisses the male, then they both hang down by their forelegs prior to mating. Other species of Lacewing have similar but subtly different courtships.

Mantidflies, often referred to as Mantispids are notable in that they possess raptorial forelegs much like those of the similarly named praying mantids – which they use in the same way. There are about 400 species. The larvae are all terrestrial. Many of them are excellent wasp mimics.

The males use pheromones instead of sound to attract the females. During courtship, the male rows his forelegs in the air while raising and lowering his wings. The eggs, like those of the Green Lacewings, are laid at the end of a thin stalk. The eggs soon hatch and immediately enter a state of diapause.

In Spring they seek out an eggsac of a Lycosid spider which it enters. After eating all the young hatchling spiders, it spins a silken cocoon inside the eggsac.

The 350 species of Ascalaphids or Owlflies are very similar to Dragonflies whom they both look like and hunt like. The eggs on grass stems. The larvae live freely amid the leaf litter in and around stones. They are actively carnivorous feeding on what ever comes their way.

Antlions are weak flyers as adults, but are best known for the trap/pits the larvae (known as Doodlebugs) in America dig and live in. The pits are dug in loose sand and, as their name suggests, their main food items are often ants.

The antlion larvae will interfere with any ant that looks like it might be getting out of the pit by flicking grains of sand at it to make it loose its footing – and thus fall into the waiting larvae’s jaws. There are about 2,000 species of antlions in the world.

There are quite a few other groups within the Neuroptera, three of them are:

The Spongeflies Sisyridae, are small brownish insects who lay their eggs on vegetation bordering water and whose larvae feed exclusively on freshwater sponges.

The 140 species of Nemapteridae, whose adults have very elongated hindwings and lay their eggs in dust, whose larvae feed on other invertebrates such as Barklice (Psocoptera).

The unusual Pterocroce storeyi from caves in the middle east has such an elongated prothorax that it effectively has a neck as long as the rest of its body.

And the Coniopterigidae, of which their are about 300 known species, which are very small and often look like aphids or whitefly. They lay their eggs on trees near aphids, on which both the adults and the larvae feed.

Well, I hope this was an interesting introduction to the order Neuroptera.

Perhaps now you’d like to learn about the scorpionfly.