Burying Beetles (Nicrophorus) are the undertakers of the natural world.

They spend their time tracking down and burying the dead bodies of small animals, mostly birds and mammals.

However, they do not do this out of any misplaced sense of tidiness. Their real aim is to use the bodies they bury as food – on which to raise their young.

Burying Beetles are fascinating. Not only because they are large, often attractively colored beetles – or because of their gruesome interest in small vertebrate corpses – but because they go in for a great deal of parental care of their young.

In the insect world, for adults to stay and protect their eggs all through their larval growth (until they are ready to pupate) is highly unusual. For the male to stay with the female, sharing the work load with her – and even standing in for her if she dies, as some male Burying Beetles do – is truly amazing. 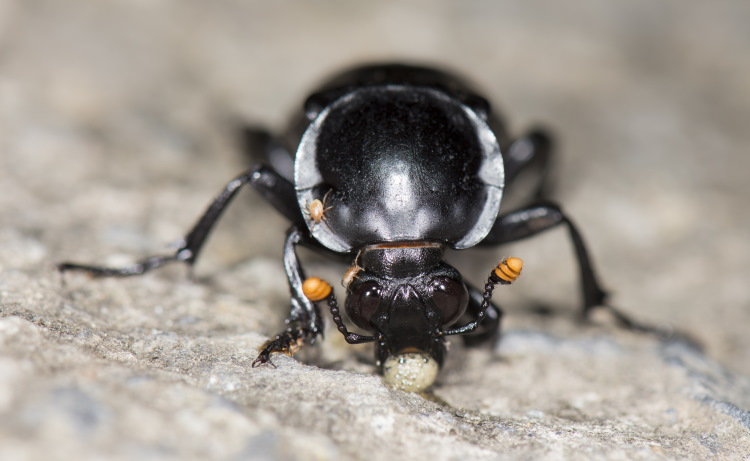 Burying beetles are much more common in temperate and/or alpine environments; and do not occur at all in Africa or Australia. There are about 75 species world wide, all in the genus Nicrophorus and the family Silphidae. The largest species in the world is probably Nicrophorus concolor from Japan and N. montivagus.

Burying beetles locate carcasses by smell. They have the end segments of their antennae enlarged and flattened, to increase their surface area – which enhances their ability to detect the odors of decay.

This special section of the antennae occurs in a number of beetle families and is called the ‘club’. 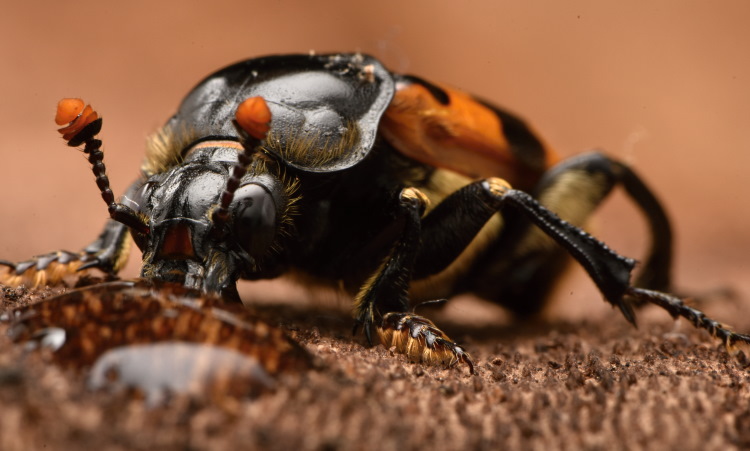 If a male locates a carcass that does not already have a female on it, he waits for a short while to see if one will arrive. If no females arrive, soon he adopts a special posture on top of the carcass and emits a pheromone which attracts females.

Some males will cheat by adopting this posture without having found a carcass. Though they generally succeed in getting a female to mate with them, they generally do not end up fathering much of her young.

This is because the female will mate again at a real carcass… and the last male to mate with her normally is the father of most of her young.

When the pair are finished, the carcass will be in its own special burial chamber beneath the leaf litter or soil; sometimes as much as 60 cm below the surface. 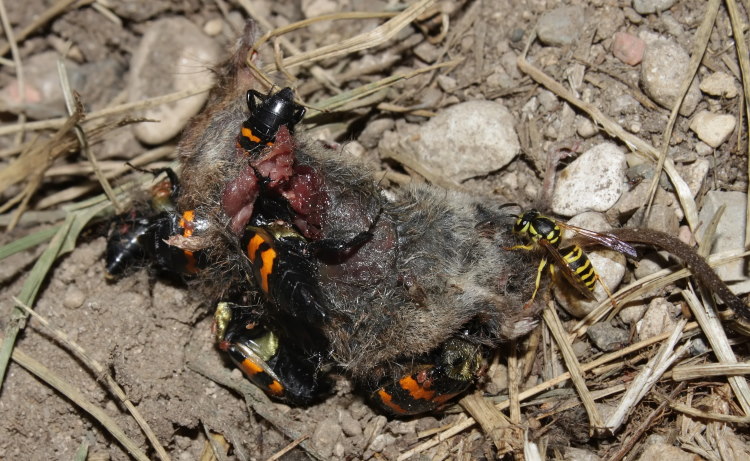 Females begin laying eggs between 12 and 48 hours after the carcass is first discovered. The eggs are laid not on the carcass, but in the soil immediately above the carcass. The eggs hatch about 56 hours later at 20C, but take longer at lower temperatures.

Just before the eggs hatch, the adults make a special ‘feeding depression’ in the top of the carcass and the larvae are fed by the adults; or can feed directly from the carcass.

Large species such as Nicrophorus orbicollis and N. sayi (both from N. America) are totally dependent on receiving some parental feeding in order to complete larval development. But smaller species like N. vespilloides can develop in the absence of adults, if necessary.

Larval development takes between 5 and 8 days, depending on temperature and size of species. When they are fully grown, they crawl off into the soil to pupate on their own.

Most species that we know about emerge about 2 weeks later as adults, but do not reproduce until the following year. For these species, it seems that an overwintering period as an adult is necessary for the ovaries of the females to develop. Other species remain as a last instar prepupae in the soil, until the following spring – and then pupate before emerging.

Adult burying beetles put a lot of effort into looking after the carcass, keeping it clean and free from bacteria and fungi by spreading their hindgut antibiotic secretions over it.

They also control the number of young, by killing off any excess to ensure that all those left alive have enough food to eat to reach maturity. In some species, the females tend to spend more time feeding the larvae than do males. If one parent is lost, the other increases its work load and is generally able to raise the young; in this case males spend as much time feeding the young as do the females.

Though more than one species of burying beetle occurs in most places, we have 7 species in the UK; 4 of which are common and 3 relatively rare. They are not necessarily competing for the same carcasses.

In Europe and in North America, the different species vary in their size – and hence the size of corpse they specialize in. They also differ in the time of year when the adults are reproductively active; and in the sort of habitat in which they search for carcasses.

In scientific terms, we say that they have different ‘niches’ – though there is often some overlap between species. For example, in the UK, our largest species Nicrophorus germanica (which is quite rare) reproduces in May and July, but only in fields; while N. humator is another large species which reproduces between April and early July, but specializes in hardwood forests. 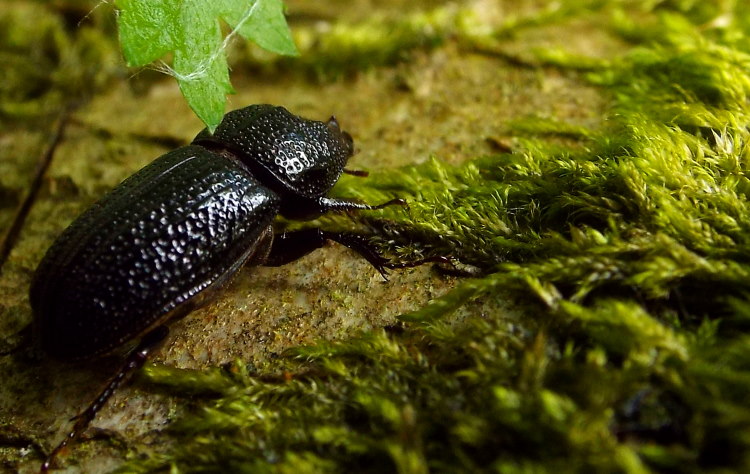 The next largest species, N. investigator reproduces between July and October – so there is practically no conflict for resources between these three large species. Smaller species tend to use smaller carcasses; and though the reproductive periods of our 2 common, smaller species overlap – their habitat preferences do not. N. vespilloides uses forest between April to September, while N. vespillo uses fields between May and July.

It is this sort of specialisation into different ways of using the world and the resources it represents, that results from the processes of speciation (becoming a new species) and helps create the diversity of life that we all love.

Note the different habitat specialisation of N. vespillo in Europe and America. It is quite possible that in another 100,000 years this difference will result in N. vespillo actually being 2 separate species. 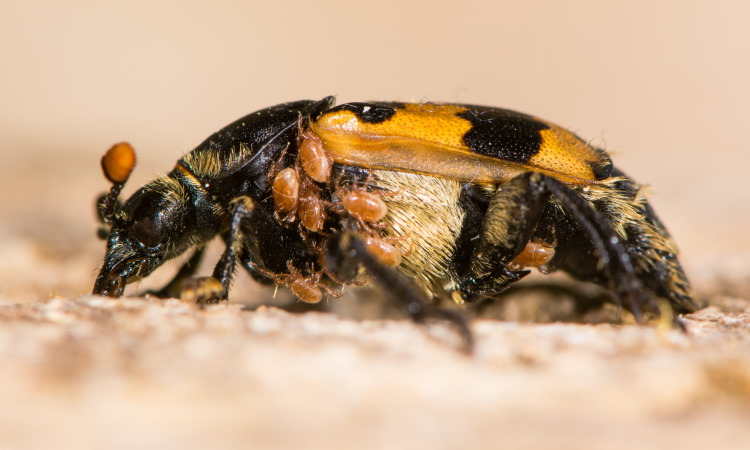 Nicrophorus vespillo with load of phoretic mites around thorax and abdomen

The adult beetles carry special phoretic mites that eat the flies (including eggs and larvae) on the carcass whenever they can; but sometimes are forced to abandon a carcass if the number of fly maggots becomes too great.

As I said in the introduction, Nicrophorus males being involved in the care of the young is extremely rare in the insect world. The factors which make this an evolutionarily successful practice for burying beetles relate to the nature of the main resource, i.e. the carcasses.

Carcasses are a highly nutritious resource, which occur in an extremely variable and unpredictable pattern of distribution. Carcasses are the limiting factor in burying beetle reproductive success.

In other words, it is the number of available carcasses which controls the number of young a male or female burying beetle can produce during its life.

When a carcass is found therefore, it is worthwhile doing everything possible to maximise the number of young you can father or mother at that carcass. Lone Nicrophorus parents (i.e. one male or one female) tend to lose more carcasses to flies, than do parents working together. 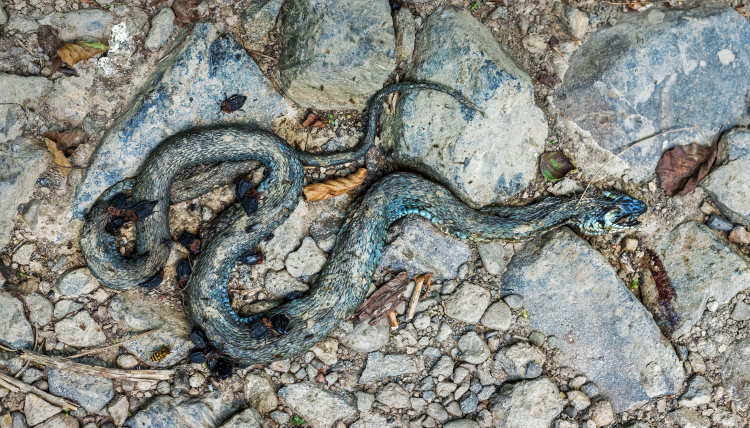 Also a lone parent is prone to having their efforts aborted by the arrival of another individual of the same species. An intruder of the opposite sex will kill off the existing young, before initiating another brood. Broods started like this are always smaller than the first brood – because some of the resource of the carcass has already been used up. A larger member of the same sex will simply drive the holder off and take the resource for themselves.

Nicrophorus Beetles working in pairs are generally able to drive off single intruders, even larger ones – thus saving both their reproductive efforts.

For these reasons – and also because a pair working together are more successful at burying a carcass than is a single mated female – a male who stays around and helps look after the young, produces more young than one who simply attracts the female, mates with her and then leaves looking for another female (as is the case in many other insects).

A final note of interest is that some carcasses are too big for a single pair to use fully. This is because there is a limit to the number of eggs one female can produce, in the few hours she has to lay after finding the carcass.

In some of these cases, more than one pair, or even unbalanced groups of more females than males, can be found using a single carcass, i.e. 3 females and 1 or 2 males or even 4 or five females. Though females are limited in the number of eggs they can lay, a male can inseminate a large number of females; generally it is the largest male present who fathers the highest proportion of the young.

Well, I hope this has been an interesting introduction to the genus Nicrophorus of the burying beetles!

Perhaps now you’d be curious to learn a little more about the humble scarab beetle.