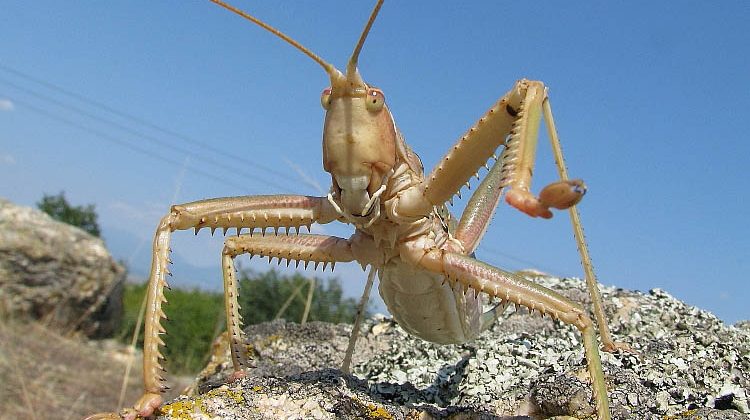 The Orthoptera (Grasshoppers and Cricket)

The Orthoptera are a group of large and easily recognised insects, which includes the Grasshoppers, Locusts, Groundhoppers, Crickets, Bush-crickets (called Katydids in America), Mole-crickets and Camel-crickets as well as some lesser groups.

There are about 25,000 known species of Orthoptera distributed around the world. Some species are very wide spread and a couple occur in both the old world and the new world i.e. the Slender Groundhopper (Tetrix subulatum).

The various crickets (the Caelifera) have antennae that at least reach their abdomens and normally reach beyond them. The Mole-crickets have the shortest antennae in this group, though they are still longer than the Grasshoppers. Also Crickets differ in that they have their ears on their fore tibia (front legs).

The Grasshoppers, Locusts and Groundhoppers (the Ensifera) all have short antennae and their ears (tympanal organs) are on either side of the first segment of their abdomen.

The smallest Grasshopper in the world is the South African Lithidium pusillium and the largest is the South American Tropidacris latreillei. Among the more unusual Orthoptera are the Proscopiidae of South America, which are extremely thin and elongate resembling Stick-insects more than their Orthopteran allies.

The Stenopelmatidae are a family of about 200, mostly nocturnal, species – many of which live in rotting wood or the leaf litter. They include the Australian King Crickets (Australostoma sp.) and the New Zealand Giant Wetas (Deinacrida sp.) .

Orthoptera are described as hemimetabolous (having nymphs that look like small adults and no pupa), medium or large insects that are usually winged as adults but may be apterous (wingless). They have a large pronotum (the plate covering the first thoracic segment or prothorax; see insect thorax) and enlarged (often greatly so) hind femur, which are used for jumping.

In the winged forms, the the fore wings are toughened and strengthened to form tegmina; the hind wings are membraneous and folded fan like. They normally have large, well developed compound eyes as well as three ocelli. Their cerci are normally short and one segmented and their mouthparts are designed for biting. Females usually have a well developed ovipositor, which is more obvious in the Crickets and Bush-crickets.

Their antennae are long and filiform in the Ensifera, consisting of a large numbers segments, but short consisting of less than 30 segments in the Caelifera. It is considered by most scientists that the Orthoptera arose in the late Upper Carboniferous more than 300 million years ago.

Ecology of the Orthoptera

The Orthoptera can be found in most habitats.

As well as the more familiar species found in Grassland and Forest, the Scaley Cricket (Pseudomogoplistes squamiger) can be found on Sea-shores; the Large Marsh Grasshopper (Stethophyma grossum) and Bog Bush-cricket (Merioptera brachyptera) can be found in Bogs and Marshes; Camel Crickets are naturally cave dwellers; the Desert Locust Schistocerca gregaria lives in Desert and Semi-Desert; while the Mole-cricket (Gryllotalpa gryllotalpa) lives under ground.

Many species are arboreal (live in trees), i.e the Oak Bush-cricket (Meconoma thalassinum), and some are quite happy swimming on or even under the water i.e. the Slender Groundhopper (Tetrix subulatum).

Though some species are very cosmopolitan i.e. the Meadow Grasshopper Chorthippus parallelus and the Great Green Bush-cricket Tettigonia viridissima, others can be quite specific in the habitat requirements i.e. Turks Groundhopper Tetrix tuerki which lives only on alpine stream gravel banks and the Ant Cricket (Mymecophilus acervorum) which is only found in ants nests, particularly those of the common Lasius sp..

Though most of the Orthoptera will eat vegetable matter of some sort only, Grasshoppers, Groundhoppers and a few rare Bush-crickets are are predominantly herbivorous (eat only plant material). Most of the rest are omnivorous (eating both plants and animals), eating whatever comes there way.

Some however, like the Oak Bush-cricket (Meconoma thalassinum), the White Faced Decticus (Decticus albifrons), the Green Grasshopper (Tettigonia virridissima), and the Mole-cricket (Gryllotalpa gryllotalpa) are primarily carnivores and active predators – though some of them will take some of the more succulent plant material as well.

The Orthoptera are renowned for their songs and in some Eastern countries males (females generally do not sing) are kept in small cages, specifically so that the keepers can enjoy their song.

Most species, particularly crickets, use 3 different sorts of song:

They produce their songs in a variety of different ways. Most of the Caelifera rub one forewing (tegmina) against the other; in the Field Cricket (Gryllus campestris) and other Crickets, the right wing is always on top. Whereas Bush-crickets always have the left wing on the top.

The sound is made by a ridge of teeth, ‘a bow’ on the underside of the upperwing being dragged across a ‘scraper’ (a strengthened vein) on the top side of the lower wing. The sound is then amplified by the ‘harp’ and the ‘mirror’ areas of stretched membrane in the wings (the Bush-crickets only possess the mirror).

There are variations on these themes. For instance, the Large Marsh Grasshopper (Stethophyma grossum) flicks its tibia across its tegmina rather than rubbing its femora across them. The Spine Breasted Grasshopper makes its song by rubbing together its mandibles and the Oak Bush-cricket (Meconoma thalassinum) drums its hind feet against the tree branch or leaf that it is standing on.

In many species of Grasshoppers the female also sings a softer, quieter song in order to indicate that she is ready to mate.

Males of the Field Cricket (Gryllus campestris) have at least three different songs:

In 1992 a fellow named R.B. Toms found that, in some Crickets, the frequency of the chirp is directly related to the temperature.

Orthoptera eggs are layed in a variety of places.

Most of the remaining Ensifera lay their eggs in a frothy sort case (like polystyrene) in the soil; the eggs are laid near the bottom and the hatchlings climb up out through the frothy tube. The eggs normally over winter (except in Crickets and Groundhoppers who over winter as nymphs or adults) particularly the Mole-cricket (Gryllotalpa gryllotalpa) which has a two year life cycle.

In the Great Green Bush Cricket (Tettigonia viridissima) the eggs can remain dormant for at least one if not two seasons, resulting in them taking 2 or 3 years to hatch.

The Orthoptera nymphs first hatch out in a sort of safety suit, that wraps all their limbs close to their body (at this stage they are called a ‘pronymph’). They then work their way slowly to the surface, pushing through the soil or foam above them with the help of an expanding sack in the top base of their necks (the cervical membrane), which forces aside a little bit of the intervening substance each time it is expanded by an influx of blood.

In the Grasshoppers and Locusts, several nymphs may work together to force the hardened top off the foam egg case. When they reach the surface they escape from their safety suit and set about looking for food. At first they are a pale white color, but within a few hours they have gained their normal colour.

Grasshoppers have 4 or 5 instars, Bush-crickets 5 to 7 and Crickets as many as 10 and up to 15 in some cases. The nymphs have small wing pads, which gradually get larger at each moult. They are unusual in that the hind wing pads are broad and folded back over the fore wings. The females also have the ovipositor develop slowly, getting larger at each moult. Most species are Univoltine (having one generation a year), the exception being the Mole-cricket (Gryllotalpa gryllotalpa) which has – as mentioned above – a semivoltine (two year) life cycle.

In the Ensifera, mating is fairly straight forward. The male approaches the female and, if she is ready to mate, the male mounts her and mating takes place. It can last from 20 minutes to several hours and the male may fall off the female and be dragged around on his back by her.

In most of the Caelifera mating is also fairly straight forward, but may be preceded by the couple standing face to face caressing each other with their antennae.

The Bush-crickets are more unusual, the male often hangs off the female in an a variety of positions and may end up upside down hanging off her ovipositor. The male then produces a large gelatinous spermataphore, which he attaches to the female’s genital opening.

This may have several segments and look like a sort of milky fruit. As soon as this process is complete, the male makes his escape before the female eats him (while he is vulnerable in his exhausted state). The female then proceeds to eat the spermataphore from the outside in while the sperm enters her genital opening, this normally takes several hours.

Well, I hope this has been an interesting introduction to the musical world of the grasshoppers and crickets!

Did you know a pet cricket can make a wonderful addition to your household?